The Volkswagen Type 181 was designed as a forestry/military vehicle to be used in Europe, mainly the German Army. It was built in Europe from 1969 through 1971 after which, Mexico began producing the vehicle. In Mexico it was called 'Safari'. Pontiac had a station-wagon in the mid 1950's named 'Safari', so Volkswagen was unable to use that name in the US market. So the decision was made to label the vehicle, 'The Thing'. The Thing was a rear engine, rear-wheel drive vehicle based loosly on the platform of the Beetle. With its four doors it appeared to be much larger than a Volkswagen Beetle, however, it was only a few inches wider and weighed about the same.A Volkswagen air-cooled, 1.6 liter flat-four provided 46 horsepower and 70 foot-pounds of torque. It was capable of achieving a top speed of around 70 miles per hour.
In 1974, Volkswagen introduced the 'Acapulco' Thing. It was basically stock, had blue and white paint, running boards, a few trim changes, a Surry top and either a soft top or a hard top.
The doors were able to be removed; no tools were necessary. The top was convertible with a fiberglass hard top available as optional equipment. With a price tag of around $3,000, it was close to one-thousand dollars more than a Volkswagen Beetle; a high price to pay for a SUV with modest horsepower and no four-wheel drive. Its ultimate demise was its inability to meet U.S. governmnet crash test standards for 'passenger cars' in 1975. It was able to avoid those requirements by being classified as a 'Multi-Purpose Vehicle' in 1973 and 1974. In 1975 production ceased after about 25,000 examples were produced.
By Daniel Vaughan | Oct 2015 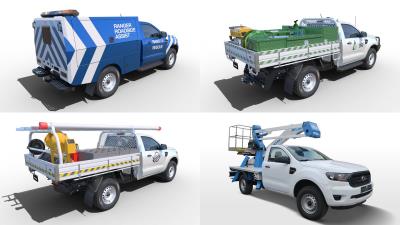