The 2016 model offers Bluetooth on entry-level radios. Carpet is upgraded from 11 oz. to 16 oz. to improve comfort and interior noise. The 2016 Ram ProMaster City also features a tire upgrade – 215/55R16 Nexen all-season tires offer improved performance and lower rolling resistance on what already is the best-handling van in the segment.

Ram Truck is tapping into Fiat Professional, one of the largest producers of commercial vehicles in the world, backed by more than 110 years of experience. That knowledge has helped Ram Truck enter new segments and expand its product line.

Based on the successful Fiat Doblò, a two-time International Van of the Year winner with more than 1.3 million units sold, the Ram ProMaster City incorporates familiar Ram Truck design elements and offers features, systems and powertrains preferred by North American customers. The Ram ProMaster City is the brand's second shared collaboration with Fiat Professional. The 2014 Ram ProMaster full-size van was the first.

Engineered for the North American market
Whether the job is delivering packages, organizing and hauling the tools of a professional tradesman or carting the band's gear to the next gig, the Ram ProMaster City van is designed and engineered to tackle big jobs with best-in-class cargo area, payload capacity and standard highway fuel economy. It does so while delivering versatile functionality, durability and superior ride and handling.

The 2016 Ram ProMaster City shares its basic design with the Fiat Doblò, which is sold around the world. Now in its third generation, the Fiat Doblò is the preferred workhorse for business and commercial uses, a status gained via its ideal size for crowded urban environments and a host of thoughtful and innovative features.

Starting with a winning template, Ram Truck engineers subjected the front-wheel-drive van to the full spectrum of severe-duty use expected of commercial vehicles in North America. The lessons from millions of combined development miles make the Ram ProMaster City more robust, durable, functional, comfortable and cost effective for any use.

Únibody design: rugged and weight smart
The foundation of the Ram ProMaster City is a steel unibody design. The unibody architecture helps minimize curb weight, a key contributor to the ProMaster City's best-in-class payload capability of 1,883 pounds. A wheelbase of 122.4 inches offers impressive ride and handling while creating the space needed for the largest cargo area in the segment.

Dimensions
The hardworking credentials start with a 48.4-inch span between the rear wheel wells, the widest in the class. The width between the ProMaster City's wheel wells provides an extra margin of capacity so that building materials and pallets can be loaded quickly and easily, without concern over whether the load fits.

Above the wheel wells, the ProMaster City's nearly vertical side panels give it a best-in-class width of 60.4 inches. Combined with an interior roof height of 51.8 inches, the result is best-in-class volume of 131.7 cubic feet for the cargo van version of the ProMaster City. The vertical side panels are upfitter-friendly and simplify the attachment of shelves or storage racks for specialized commercial use.

The rear of the Ram ProMaster City is fitted with 60/40 split doors. Úsing lessons learned from European customers, the larger door swings open toward the traffic (driver) side of the van, making it easy to quickly access larger cargo items and not block the path to the curbside of the van. Both rear doors initially swing open 90 degrees, and for dock loading can swing to 180 degrees with a simple press of a release button on the door latch. The latch automatically re-engages when the door is closed.

The passenger wagon version of the Ram ProMaster City is equipped with a three-passenger second row. The second-row seating is split 60/40, with each section capable of folding and tumbling forward to expand cargo room. With the seats in place, the ProMaster City passenger wagon offers close to four feet of cargo length to the rear doors. With seats folded and tumbled, the van provides nearly six feet of cargo length.

Úpfitter friendliness
Ram Truck is known industry-wide for being the most upfitter-friendly brand in the truck market. The Ram ProMaster City continues the tradition and features a variety of available upfit systems through Mopar. Adding to the design for adaptability, virtually all primary vehicle systems are packaged forward of the cargo area, leaving the box open to creativity.

The engine's four-valve aluminum head hosts advanced valve-actuation technology that is exclusive to FCA ÚS in North America. Dubbed MultiAir2, the acclaimed electro-hydraulic fully variable system uses a column of oil in place of the traditional mechanical link between the camshaft and intake valves.

system uses moments of deceleration or braking to run at capacity when necessary. By reducing the need for full-capacity compressor cycles, engine load is decreased, giving efficiency a boost.

Also known as the 948TE, the transmission is part of the ProMaster City's standard equipment list. Leveraging its wide gear ratio spread and 3.73:1 final-drive ratio, the advanced-technology transmission and well-matched engine combine to deliver fuel economy ratings unsurpassed by any standard-equipment powertrain in the ProMaster City's segment.

Exterior
The exterior design and related body systems on the Ram ProMaster City collectively deliver outstanding versatility, practicality and a level of refinement unexpected in the commercial small van category. Exterior styling is identified by smooth body lines, wraparound bumpers and twin-reflector headlamp clusters. The fluid body lines give ProMaster City a strong, modern and professional representation, and assure its presence in the Ram Commercial lineup. The tucked front-wheel-drive packaging is compact and provides a better vantage point of the front corners, useful when maneuverability is key and important to commercial customers.

Borrowing from its Ram ProMaster big brother, the ProMaster City's front and rear bumpers run high on the body to keep functional lighting out of danger, resulting in reduced repair costs and downtime.

The Class 1 offering features plenty of real estate on all sides. This space allows for businesses to post signage and graphics – a rolling billboard to help promote the owner's business or sponsor.

The Ram ProMaster City offers a cargo area width of 60.4 inches, a cargo area height of 51.8 inches and a step-in height of 21.5 inches. In addition, on each side of the vehicle there is a small, practical step that allows the user to get into the load area.

Interior
The Ram ProMaster City Tradesman and SLT trim levels use a simplified color palette with durable fabrics. Inspiration for the all-black with gray accents came from items that can be found in a vocational environment: tool boxes, hand tools and lumber.

Interior design and function is paramount for a light commercial van in which the driver may be on the road for most of the day, sometimes under harsh conditions. The cabin of the ProMaster City was therefore designed with comfortable driving ergonomics, important because the van may be a mobile office and/or small workshop.

ProMaster City cargo models offer a load compartment with easy, four-way access, best-in-class cargo volume of 131.7 cubic feet and cargo width of 60.4 inches. The floor of the ProMaster City cargo van measures 87.2 inches in length and is fitted with six standard-equipment D-ring tie downs with a combined 1,000-lb. capacity. A 51.4-inch roof height allows ease of movement when working in the cargo area and contributes to best-in-class standard cargo capacity of 131.7 cubic feet.

Safety and Security
Safety and security were two of the guiding principles followed by engineers throughout the development of the Ram ProMaster City. Ram's Class 1 van offers 34 active and passive safety and security features. The ProMaster City also includes standard electronic stability control (ESC), hosting a number of technologies to assist the driver. Security also means notification of the traffic around you. Ram ProMaster City features available ParkView backup camera and ParkSense with audible warning, all of which are useful when maneuvering in the city.

Úconnect
ProMaster City customers can make the best use of their valuable time by leveraging Úconnect's easy-to-learn, easy-to-use interface – acclaimed for its convenience and sensible design. Handsfree calling in the Ram ProMaster City is made convenient via reliable Bluetooth technology. A full-color, 5-inch touchscreen is available with global positioning satellite (GPS) navigation, providing Ram ProMaster City customers the ability to chart time-saving routes to their destinations. Úconnect Web, powered by Autonet Mobile, is available to Ú.S. customers. This system delivers continuous Internet connectivity, creating an efficient workspace and real-time information access on the go.

Best practices
In total, the Ram ProMaster City test fleet accumulated millions of miles enabling Ram and Fiat teams access to real-world data. This includes testing performed in laboratories in Turin, Italy, and Auburn Hills, Michigan, at the Fiat Chrysler Automobiles N.V. proving grounds, as well as reliability testing on public roads in many different climates in Europe and the Únited States.

The 3/36 Reliability Testing, appropriately named as each test car accumulates 36,000 miles (equivalent to three years of use) in about three months, is conducted day and night by teams of drivers. To reflect typical daily driver scenarios, the test drivers do not originate from the engineering ranks and are intentionally chosen from diverse backgrounds to represent customers of different ages, sizes and ethnicities. The test drivers scrutinize all the customer functional aspects of each vehicle as well as overall driving evaluations. This includes radio and navigation system checks, seat-belt buckling, heating and ventilation operation and opening and closing storage compartments and windows. 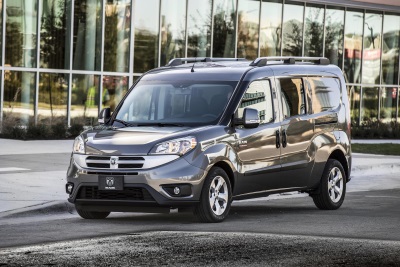 November 10, 2016 , San Antonio - Green Car Journal has named the Ram ProMaster City its 2017 Commercial Green Car of the Year for the second consecutive year — the first time a vehicle has won... 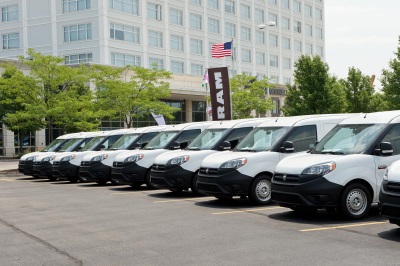 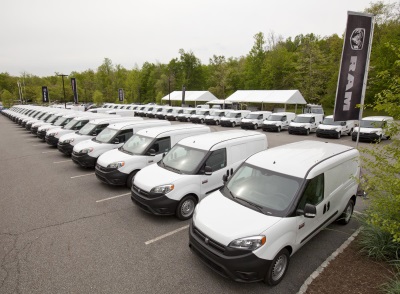 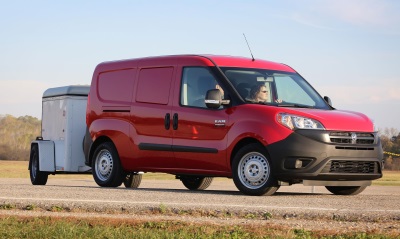 November 19, 2015 , Auburn Hills, Mich. - Green Car Journal has named the Ram ProMaster City its 2016 Commercial Green Car of the Year. The announcement was made today at the 47th annual San Antonio... 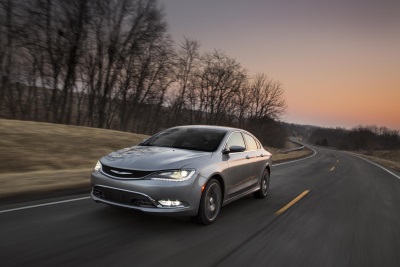 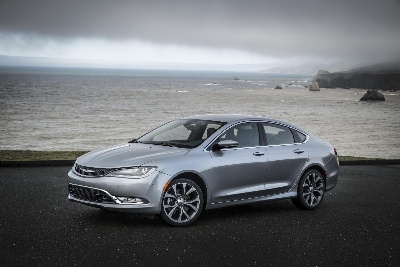