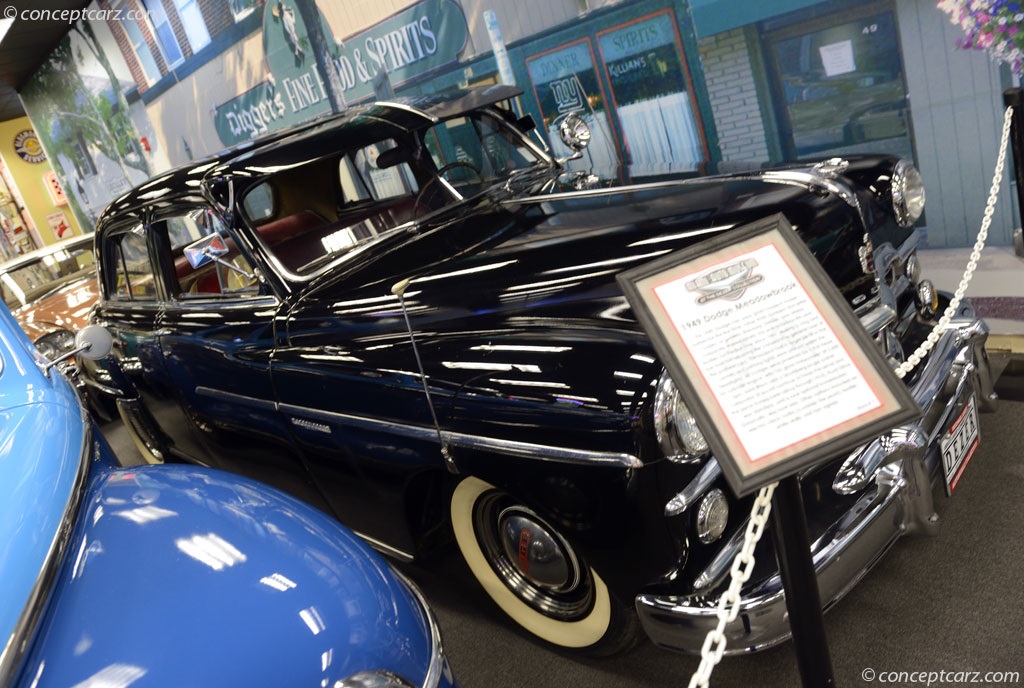 The Dodge Meadowbrook name was introduced in 1949 and remained in production through 1954. It was similar to the Coronet but differed in levels of trim and equipment. For 1949, it was the base trim level and only available as a four-door sedan. It was priced at $1,850 which was approximately $70 less than the Coronet sedan. Dodge resumed civilian production late in 1945 at the close of World War II, and the immediate vehicles wore pre-war styling with mild updating. The six-cylinder 230 cubic-inch engine had 102 horsepower and would be part of the Dodge lineup until 1959. In 1960 it was a new 225 cubic-inch 'Slant Six,' named because it slanted toward the passenger side of the car to allow easier maintenance on the spark plugs and carburetor. The 230 CID six was the sole Dodge engine until 1953 when Dodge introduced totally restyled bodies, a fully automatic transmission, and the 241 CID 'Hemi' V-8 engine.For 1949, Dodge gave its vehicles modern model names rather than numbers and letter codes - or using the word's Standard or Deluxe. Power for all Dodges was from a 103 horsepower six-cylinder engine that was fed through a Stromberg single-barrel carburetor. Fluid-Drive was standard, and a new optional transmission, Gyromatic, was available only on the Coronet. Other options included turn signals, clock, radio, heater, and whitewall tires. Another feature was the 'Safe-Guard Hydraulic Brakes' which included two-cylinder per front brake.
For 1949, the Meadowbrook and Coronet sedan was very popular, accounting for approximately thirty-percent of Dodge's sales.
By Daniel Vaughan | Jun 2016
Concepts by Dodge