AMC introduced the diminutive Gremlin during 1970 as its youth market car, offering such eye-catching options as an all-denim Levi interior. Annual sales climbed from 49,539 units the initial year to 113,776 units in 1974. AMC launched a variety of special edition cars with sales that benefitted from its multi-prong effort in racing which included the Penske-Sunoco Trans-Am team, stock car teams, and several Pro Stock drag racing teams, all boldly displaying AMC's unmistakable red-white-blue paint schemes. AMC signed Wally Booth to lead the Pro Stock effort, racing a number of cars to fame.For the 1972 season, the Gremlin fit the new Pro Stock rules that favored short wheelbase, lightweight small cars. Other teams went that route too and fierce competition emerged with the Chevrolet Vega and Ford Pinto drivers. All of these cars were powered by smaller displacement V8 engines to fit the new cubic inch-to-weight formula. From its bigger car lines, AMC had only two engines, the 360 and the 401, neither being high performance engines and there were virtually no after-market components available. Booth and engine builder Dick Maskin seriously re-worked the heads to produce competitive Gremlins.Two cars were built and campaigned with AMC support, one raced by Booth, and this car, run by Jim Gilbert and Maskin. On local circuits, the cars were tough to beat, but when raced nationally, Gremlin aerodynamics held the cars to a best of about 9.3 seconds at 145 mph, about a half-second off the national mark. 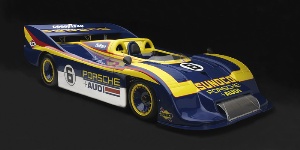 Gooding %26 Company, the acclaimed auction house celebrated for selling the worlds most significant and valuable collector cars, is honored to announce its recent consignment of the Drendel Family Collection of 18 Porsches. Recognized as the worlds...
© 1998-2020. All rights reserved. The material may not be published, broadcast, rewritten, or redistributed.