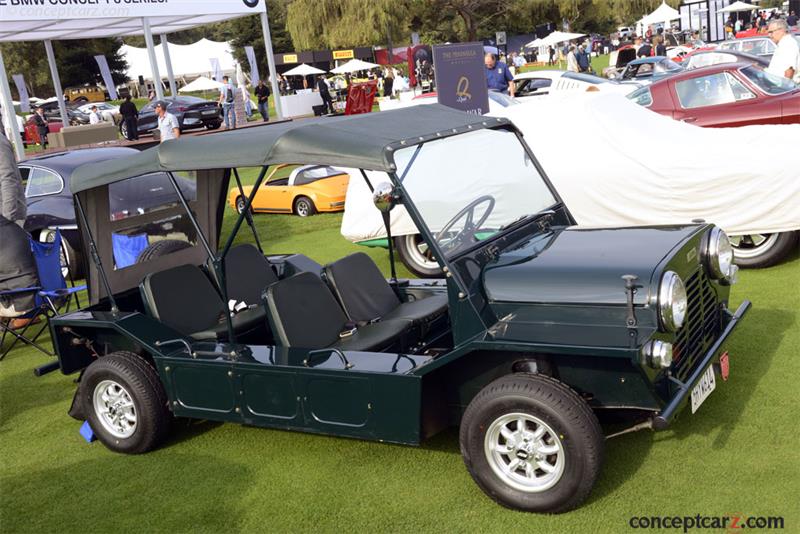 Designed by Sir Alec Issigonis, the Austin Mini Moke was a prototype initially developed in 1959 to meet a demand in the British Forces. For the next five years the Mini Moke underwent a variety of different prototype models. One of these prototypes included the 4WD Twini-Moke a two-engine model. The moniker for the automobile comes from 'Moke' which refers to Donkey and 'Mini' - the vehicle that the Moke shares a variety of parts with. Over the years the Moke has been marketed under numerous names that included Morris Mini Moke, Leyland Moke and Austin Mini Moke. The original Moke used an identical transmission, engine and suspension parts as the basic Mini. Most spare parts today are still easily found because the A-Series engine, suspension and manual gearbox are identical to that of a standard Mini. With no chassis, the wheels of the Moke, brake assemblies and suspension are joined to front and rear subframes that are bolted right into the monocoque shell, just like a standard Mini. Codenamed 'The Buckboard', the first design was a mock-up for a military vehicle similar to the U.S Jeep, but unfortunately it wasn't very popular with the British Forces who complained with the lack of ground clearance, particularly below the engine, which made it impractical as an off-road vehicle. The only ones that shared any interest in the Buckboard was the Royal Navy, as a vehicle for use on the decks of aircraft carries.
In 1960 and 1961 some Moke models were found in the British, American, New Zealand and Australia Army, those models were varied from current Mokes, with side windscreens, varied engine performance, wheelbase and sump-guard.
When he designed the Mini, Issigonis planned another vehicle that shared the Mini's mechanical parts, but with a much more weathered body shell. He did this in an attempt to take some of the military vehicle business from Land Rover. Earlier he had designed the Nuffield Guppy in an unfortunately failed attempt to break into that marked.
Early advertising material promoted the weightlessness of the vehicle. It showed four soldiers taking the Moke off-road before picking it up by its tubular bumpers and carrying it once its low ground clearance proved ineffective. Trying again to make something for the army, several four-wheel drive Mokes were constructed by adding a second engine and transmission to the back of the car with linked clutches and gear shifters. Unfortunately this didn't help the ground-clearance issues, and mechanical problems discouraged further development past the prototype stage. This version was called 'The Twini' and was also shot down by the US Army.The Moke was offered in a civilian version as a cheaper, easily maintained utility vehicle and targeted at farmers and light commercial drivers. In 1963 several prototypes were built, one that still survives today in Pinner, just outside London, England. The following year the Moke was introduced in the UK. British Customs and Excise department chose to classify the Moke as a passenger car instead of a commercial vehicle that meant that it required purchase tax, which unfortunately reduced sales.