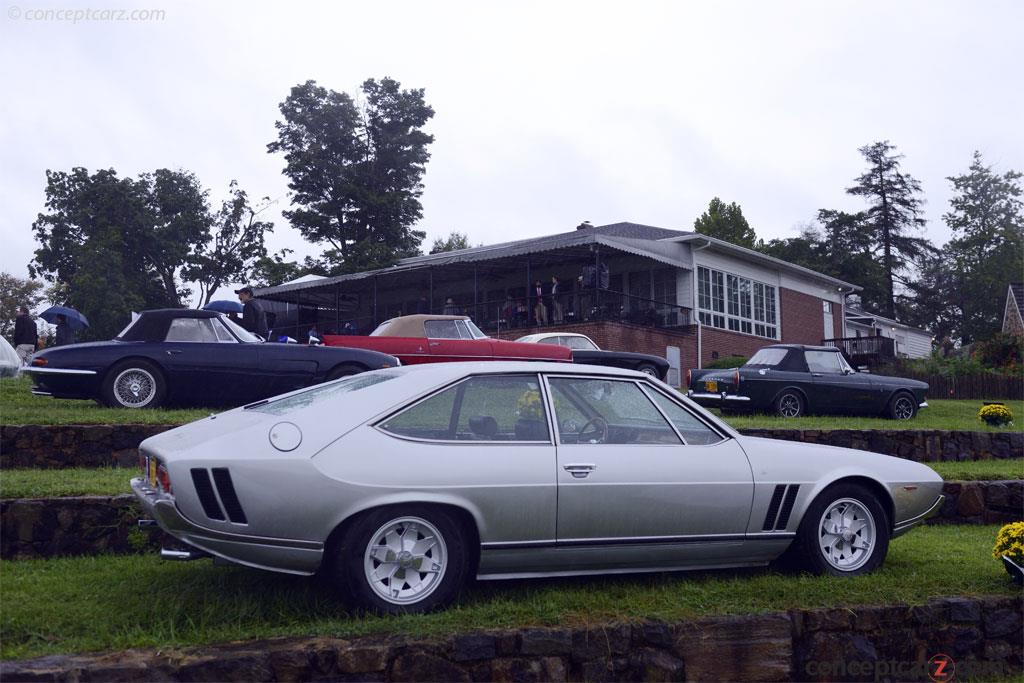 The Iso Lele was produced from 1969 through 1974 with a total of 285 examples produced. It was a 2+2 seater that was positioned between the Grifo and the Fidia and was fitted with a V8 engine (from Chevrolet or Ford). The style was performed by Marcello Gandini at Bertone. Piero Rivolta, the son of Iso company founder Renzo, named the car 'Lele' after his wife - Lele Rivolta.

The Lele was originally fitted with GM powerplants but when in 1972 GM requested that the engines be paid for in advance, Iso switched to the Ford Cleveland V8. At that time, the automatic gearbox also became a Ford unit, while the five-speed manual remained unchanged.

In 1973, the Lele IR6 Sport was introduced and brought with it a 360 horsepower engine and a ZF five-speed manual gearbox. The Lele IR6 Marlboro version was introduced when an agreement with Philip Morris and the formation of the Iso-Marlboro Formula 1 team.

In 1974 Iso closed bringing an end to the Lele production.
By Daniel Vaughan | Sep 2008The name Iso has been synonymous with luxury for many years throughout the automobile world. 'Ieri, oggi, domani' Italian for 'yesterday, today and tomorrow' Is Iso's trademark.

Named after Lele Rivolta, the wife of Piero Rivolta; the son of Iso, the company founder of Renzo, the Iso Lele was quite a classy vehicle. Unveiled in 1969, the Lele was designed by Bertone and was the successor to the Rivolta. This was the number one vehicle that was designed by both Bertone Piero Rivolta and his wife for an American client who requested Iso to produce something unique and exotic.

The Iso Lele was a large roomy coupe that featured a ‘well executed combination of a sportscar and luxury sedan.' The Lele was a spirited four-seater coupe that was powered by an eight-cylinder Cobra Jet engine. The Lele featured a V8 engine that produced 355 bhp and was offered with a five-speed gearbox as standard and automatic transmission available as an option. The Lele came with AC, luxury fittings, power lock differential and an electronic injection. With a top speed of 147 mph, the Iso Lele could achieve 0-60 mph in 7.8 seconds.

The sports coupé Lele featured an ultra sleek body that encased a 2+2 seater that filled the space between the Fidia and the Grifo. The styling of Bertone was used, much like the Grifo. The engine capacity was increased in 1970 to 5,736 cc while an equal maximum power of 300 or 350 hp now improved the distribution of torque along with the ‘elasticity of travel'. The Lele came with a 106.3 inch wheelbase and had a length of 183.1 inches and a width of 68.9inches.

Two years later the Ford Cleveland V8 engine was replaced with the Chevy engine due to request from GM to pay in advance engines. The manual 5-speed transmission stayed the same while the automatic transmission also became Ford. The Lele IR was the standard version and was flanked by the Lele IR6 Sports. The IR featured an enhanced engine at 360 hp and change only manual ZF 5-speed transmission.

The Iso Rivolta Lele Sport was introduced from 1973 through 1974 and was a very exclusive sports vehicle. The Sport could achieve an impressive 170 miles an hour as a top speed and produced around 360 horsepower from its 5.7-liter, Ford-sourced V8 engine. Only 20 Iso Lele Sports were ever produced. The seats were replaced with lightweight ones while sound deading materior was removed along with the wood trim. Featuring a much sportier interior, the dashboard and steering wheels were changed while extra gauges were placed in front of the passengers. The Sport received a large front spoiler while the bumpers were in black fiberglass. .

From an agreement with Philip Morris, Iso introduced the team Formula 1 Iso-Marlboro that was presented as the Lelo IR Marlboro. This version was 510 lbs lighter than the Lele Sport version. Introduced in 1973 only five Lele Marlboro's were ever produced and featured a 360 hp Ford engine and ZF 5-speed gearbox.

The Iso Lele retained the quiet, comfortable, and unique features of the earlier Iso Rivolta. A very elegant automobile, unfortunately the Iso Lele didn't draw the crowds the way other Italian Supercars did. Iso's were produced in Varedo, Italy, 13 miles outside of Milan. Many enthusiasts consider Iso's to be among the most beautiful automobiles in the world.

A total of 317 models were produced during its production run from 1969 through 1975. The final Iso Lele rolled off the assembly line in December of 1974.By Jessica Donaldson

The Iso Rivolta LeLe was produced from 1969 to 1974. As a 2+2, it filled the gap between the Grifo and Fidia. It was named after LeLe Rivolta, wife of Piero Rivolta and daughter in-law of the founder, Renzo Rivolta. It is one of 285 LeLes made includ....[continue reading]