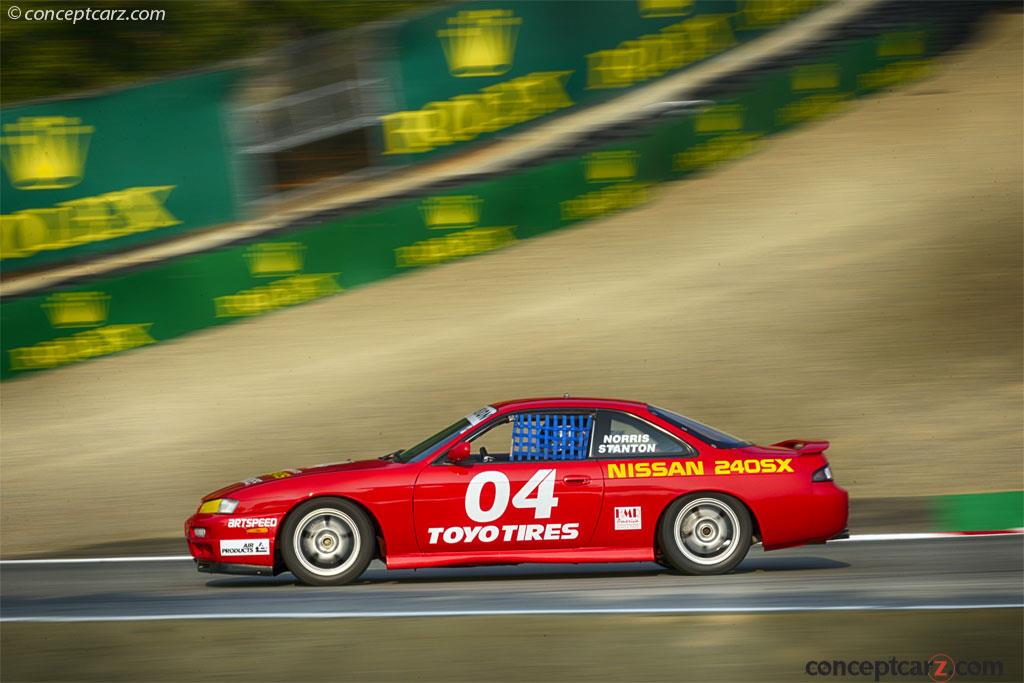 The Nissan 240SX was introduced in 1989 and served as a replacement for the 200SX, remaining in production through 1999. Most were equipped with the 2.4-liter four-cylinder engine with a single overhead cam. The 1995 Nissan 240SX had a 146 cubic-inch engine offering 155 horsepower and mated to a five-speed manual transmission, with an optional four-speed automatic available. Disc brakes were at all four corners. The 2-door coupe had a base price of $17,500. 1995 was the start of the second generation 240SX, being officially released in the spring of 1994. The prior convertible and hatchback were no longer available, leaving just the coupe. The wheelbase grew by 2 inches and the track increased as well, but the overall length decreased slightly. Fixed lamps replaced the pop-up headlights; dual air bags were added; automatic seatbelts replaced the manual type; cup holders were removed; and the stiffness of the chassis was increased. The interior layout remained mostly the same, but nearly all the parts were redesigned meaning that very few parts were interchangeable with the prior version. The fuel tank was relocated from the back of the car to in front of the rear suspension and behind the rear seats. Trim levels included the base, SE and LE (and the SE/LE). The base 240SX was given a softer suspension, no rear sway bar, and 4-lug, 15-inch wheels. Buyers had the option of adding several different features including a viscous limited-slip differential, ABS, and leather seats. The SE and LE models came with a stiffer suspension, a rear sway bar, and larger 5-lug, 16-inch wheels. The LE added an anti-theft system, a CD player, leather seats, and keyless entry.
By Daniel Vaughan | May 2019
The IMSA Showroom Stock Touring Car series of 1995 thru 1998 was a pro series that competed in three hour enduro races sponsored and televised by Speedvision as the Speedvision Cup under IMSA sanction.The car competed in the Speedvision Cup including races at Sebring, Daytona, Road Atlanta, Watkins Glen (1st), Dallas (street race), Texas Motorpeedway, Sears Point (1st), Las Vegas (1st) and Mosport. The races typically featured 40 cars.John Norris was a Toyo tire dealer and was associated with Leitzinger Imports. He had raced extensively before this series and had competed in IMSA, RS, Pikes Peak, and Coors Race Truck series. The Speedvision Cup cars were purchased directly from Nissan for $1. John generously waved a $20 bill at one meeting and offered to buy 20 cars. That offer was declined.
John's co-driver was Craig Stanton, who went on after the series to run at LeMans and at Daytona as a Porsche factory driver.
The GTI Racing team drivers also included John Morton who raced at Mosport, as well as Mark Mitchell, Mark Weber, Marc Jones and Andy Bornhop.Team Principal was Dono Soeharto, Chassis built by Technosquare - Howard and Ritchie Watanabe, Sly built engines at Nissan Motorsports and trackside crew - Chris, Howard and Ritchie.

A replacement for the 200SX, the Nissan 240SX was introduced in 1989 and came with a much larger engine than its predecessor. The new 240SX also retained the rear wheel drive, which it made it popular for driving enthusiasts. Popular for racing, modifications and tuning, the 240SX came with a sporty profile and race car-like appeal.Suffering the fate of many sporty coupes of the era, the 240SX....
Continue Reading >>

Team Ready to Shine in Six Hour Race June 27, 2014 (WATKINS GLEN, New York) – At this stage last year, Mazda had scored three of their nine wins with the SKYACTIV-D Mazda6 in the Grand-Am GX class on their way to the manufacturers championship....

Looking for a compact sports sedan thats easy on the wallet Want an affordably-priced 4-door offering high-performance, a turbocharged engine and all-wheel drive Mitsubishi Motors has the answer with a choice of four unique 2014 Lancer models to choose...
© 1998-2020. All rights reserved. The material may not be published, broadcast, rewritten, or redistributed.