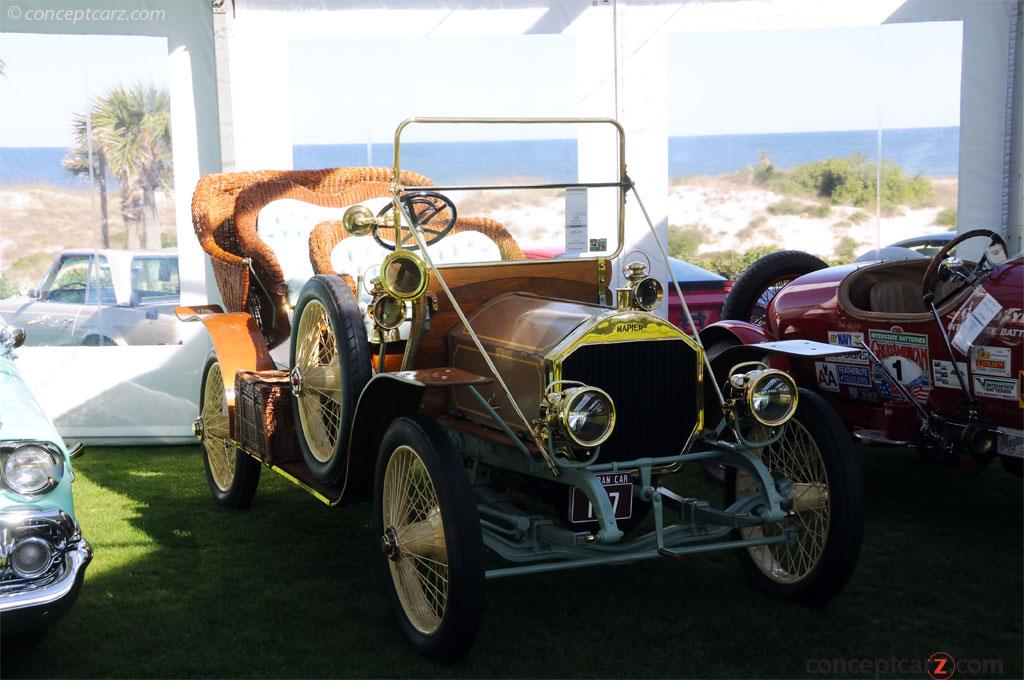 David Napier of Scotland moved to London and by 1836 had established an engineering company called D. Napier & Son. His son, Montague Stanley Napier, purchased the business in 1895 from the executors of his father's estate. Under his care, the company diversified into producing machine tools for the popular cycle industry. In 1899, the company expanded even further when they built an automobile for businessman and racing driver, Selwyn Edge. After the outbreak of the First World War in 1914, they switched to building aircraft engines, along with developing the successful Lion engine.

Mr. Edge owned a Panhard et Levassor which he used to place second in the 1896 Paris Marseilles race. The car that Napier built for Edge was based upon the Panhard's design. Mr. Edge was impressed with the Napier product and purchased six additional cars, which were sold to the public from a showroom in London. In 1902, Edge drove a Napier to victory in the Gordon Bennett Cup and earned the first British victory in an international motor race. 'Win on Sunday sell on Monday' - the racing success surged demand for the Napier/Edge vehicles.

In 1904, Napier produced the world's first commercially viable six-cylinder engine. It had a five-liter displacement with mechanical overhead intake valves. This engine inspired a 15-liter racing version. A five-liter L-head six with a three-speed gearbox and shaft drive was added to the lineup in 1908.

Along with the company's luxury models, they produced 'Colonial' models which had a raised chassis that offered additional ground clearance needed to traverse the less-developed Commonwealth countries. Power was sourced from a 2.7-liter four-cylinder car offering 15 horsepower and offered as both the 'Colonial' and 'Extra Strong Colonial' forms.
by Daniel Vaughan | Jul 2019
Vehicle Profiles

In the 1960s, this 1911 Napier 15 HP was rebodied with a wicker victoria body with the work performed by the Royal Institute for the Blind in Nottingham, England. The teak-veneer fenders, however, are original. In 1970, it crossed Australia from Pert....[continue reading]