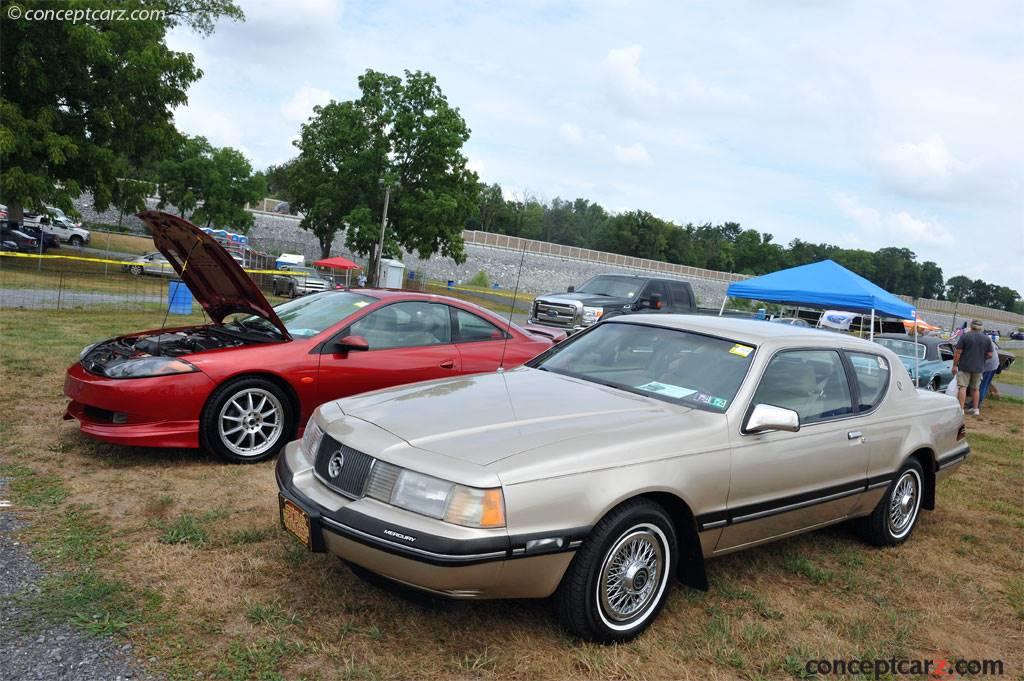 1988 was the final year of the Sixth Generation Mercury Cougar, introduced in 1983. The history of the Mercury Cougar dates back even further, to 1967, and spent much of its production life as a counterpart of a Ford vehicle. Typically, these models received a higher degree of accouterments, trim, and amenities than its Ford sibling. The first two generations of the Cougar was derived from the Ford Mustang, serving as a pony car. For its third and fourth generations, the Cougar used the chassis of the Ford Torino intermediate. Initially, it was the counterpart of the Ford (Gran Torino) Elite. During the fourth generation, it served 'double duties' replacing the Montego as the Mercury intermediate, with the Cougar XR7 becoming the counterpart of the Ford Thunderbird.Both the fifth and sixth generations of the Cougar rested upon the compact Fox platform. The fifth-generation was again two model lines, with the standard Cougar replacing the Monarch as the counterpart of the Ford Granada, and the XR7 derived from the Thunderbird. The sixth-generation Cougar revered back to the two-door coupe body style and was the counterpart for the Thunderbird.Within the Mercury lineup, the Cougar was above the Sable and below the Grand Marquis. The base price of the 1988 LS Cougar began at $14,850 while the XR-7 listed for $16,270. The base engine was the overhead valve V-6 engine with a cast-iron block and aluminum head. It displaced 232 cubic-inches and had multi-point fuel injection helping it produce 140 horsepower at 3,800 RPM and 214 lbs-ft of torque at 2,400 RPM. This was a 20 horsepower increase over the prior year. The base transmission was a four-speed overdrive automatic. The steering was a rack-and-pinion unit and braking was handled by disc brakes in the front and drums at the rear.
Dual exhaust became standard on cars equipped with V8 engines, and blackwall tires were now standard on the base LS models. Multi-point fuel injection replaced the former throttle-body (single-point system and a new balance shaft were added to the V6. The final drive ratio of the XR-7 was switched from 2.73:1 to 3.08:1 and new 16-spoke cast-aluminum wheels came in either body color or argent. The former electrical cluster in the XR-7 dashboard was switched to analog instruments. The electronic version was still available as optional equipment. XR-7 models received body-color bumpers, a body-color grille, bodyside moldings and mirrors, and the V8 engine.
Mercury produced 119,162 examples of the Cougar for 1988, an increase of the 104,526 produced the prior year. 135,909 were built in 1986 and 117,274 in 1985. 147,243 examples of the 1988 Ford Thunderbird were built. Prices for the 1988 Thunderbird ranged from $13,600 - $17,255. Engine options included a turbocharged 4, V6, and V8. Horsepower ranged from 140 to 155 hp.
By Daniel Vaughan | Aug 2020