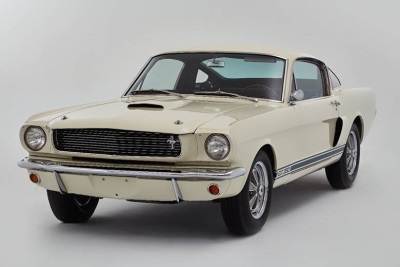 Scottsdale, Arizona (July 31st, 2015) – In 2015, Monterey Car Week and the Motorsports Reunion will celebrate the 50th anniversary of one of the most important and most recognizable road racing automobiles of all time: Shelby's highly pivotal and highly cherished GT350. From the restoration shop, to the race track to the coucours lawn, nobody demonstrates a dedication to the Shelby GT350 and preserving its prominence like Russo and Steele. With this passion in mind, we are proud to present as our Monterey 2015 pinnacle GT350 offering, what can only truly be described as one of the finest examples of what is arguably Carroll's premier pony anywhere in existence: This very special and exceptionally recognized 1966 Shelby GT350 'change-over'. To ensure that Shelby American would have its 1966 GT350 models in dealerships when Ford released the new '66 Mustangs, Shelby ordered an additional 252 cars from Ford's San Jose plant at the very end of 1965 production. These 'change-over' cars (often referred to as 'carry-overs') were essentially Shelby-spec '65 GT350s, and received the same performance modifications, with the addition of full-length exhaust, functional rear brake-cooling ductwork, and plexiglass rear quarter windows. To many collectors and experts, the 252 1966 'change-over' cars are unique and represent the best of both worlds since they fully reflected Carroll Shelby's original, harder-core vision for the original GT350, along with the updated visual cues of the 1966 cars. This 1966 Shelby GT350 'change-over' car, serial number 6S213, was shipped from Shelby American to McFaydens Ford, Omaha, Nebraska on October 15, 1965, and delivered to its original owner, Ralph Barbe on November 20th. Barbe was a life-long active member of the Nebraska Region SCCA and used 6S213 sparingly for time-distance rallies, gymkhanas, and other club-related events, before selling it in 1990 with only 23,617 miles on the clock to the current owner. While 6S213 was a one-owner, rust-free, and undamaged car not needing restoration, it was restored nonetheless to join the current owner's 1965 GT350 (5S179), which is one of the country's best unrestored examples. The restoration work was performed by Jim Cowles and Shane Whiting of Shelby Parts & Restoration, and Bob Perkins of Perkins Restoration. Complete photographic documentation collected during disassembly confirm all factory paint codes and inspection marks. Since the entire underside of the car had been heavily undercoated prior to delivery to the original owner, all undercoating was removed by hand, with the floor pans neither media-blasted nor stripped during restoration. This care made it possible for Mr. Perkins to apply only enough paint onto the floor pans to match their original overspray patterns. The effort to remain factory-correct also extended to the exterior paint finish, which beautifully simulates the factory's work with the correct amount of orange peel!

The Shelby retains its complete, matching numbers drivetrain; including the aluminum-case T-10 four-speed, and the engine, transmission, and rear end were completely inspected and refreshed to factory specifications during the restoration. Only the original and first-design, date-coded NOS parts were utilized, which were located and collected over a 12-year timeframe, including entire NOS front suspension, full NOS 1965-dated exhaust system, correct assembly-line battery, restored Cragar wheels retaining the original outer rims, four excellent original Goodyear Blue Dot tires, and an NOS spare. In fact, well over $100,000 was spent on NOS parts alone. All parts, fasteners, and hardware feature correct finishes, consistent with original specifications. Extensive detailing of the car included the careful duplication of all original inspection marks, part identifiers, paint codes, and more. Further setting this outstanding GT350 apart from the rest, it is devoid of the usual 'LeMans' stripes seen on the majority of other examples of the breed. On the show field, this amazing GT350 is one of only two Shelby's to earn the following elite awards: - SAAC National Convention Division I Concours Premier Award (perfect authenticity score) - Mustang Club of America (MCA) Grand National Thoroughbred Division Gold Award (twice) - MCA Authenticity Award (only open to Silver or Gold Thoroughbred Division winners) Trending News
Photo credit: Russo and Steele
posted on conceptcarz.com
Loading...
Loading...
Loading...
Loading...
Loading...