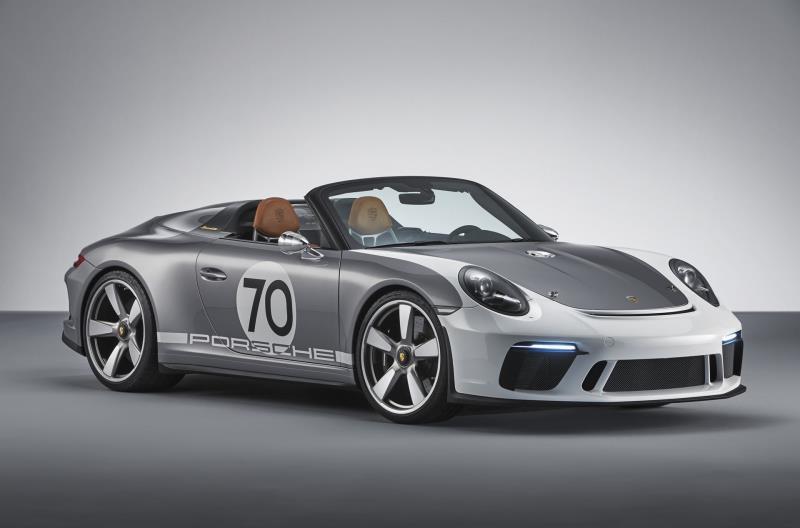 September 28, 2018 by Porsche
North American premiere at Rennsport Reunion VI in California Atlanta, Georgia. The Porsche 911 Speedster Concept received an enthusiastic welcome at its third public appearance. Following its world premiere on June 8 in Stuttgart-Zuffenhausen, Germany, as part of the '70 years of Porsche Sports Cars' anniversary celebration, and first demonstration drives at the Goodwood Festival of Speed in July, the open-top concept car is now celebrating its U.S. debut at Rennsport Reunion VI in California. The 911 Speedster Concept is based on the current 991 generation and offers a preview of a potential new equipment range from the Porsche Exclusive Manufaktur. With Heritage Design packages, the Stuttgart-based sports car manufacturer is considering providing a modern interpretation of the distinctive themes and colors of its history from the 50s, 60s, 70s, and 80s. In addition to the 911 Speedster Concept, Porsche is presenting another unique product at the Laguna Seca Raceway as part of Rennsport Reunion VI: the Porsche Design '911 Speedster' concept chronograph. A decision about a possible production version of the 911 Speedster Concept will be made very soon. Painted in a two-tone GT Silver Metallic and White, the concept car reflects the core of the Stuttgart sports car manufacturer in precise clarity and historically accurate design. It was developed at Porsche Motorsport in close cooperation with Style Porsche and the Porsche Exclusive Manufaktur. It is powered by a naturally aspirated flat-six engine developing over 500 horsepower and capable of revving up to 9,000 rpm. Power is transferred to the rear wheels by a six-speed manual transmission. The development focus was on creating a pure and exhilarating driving experience. 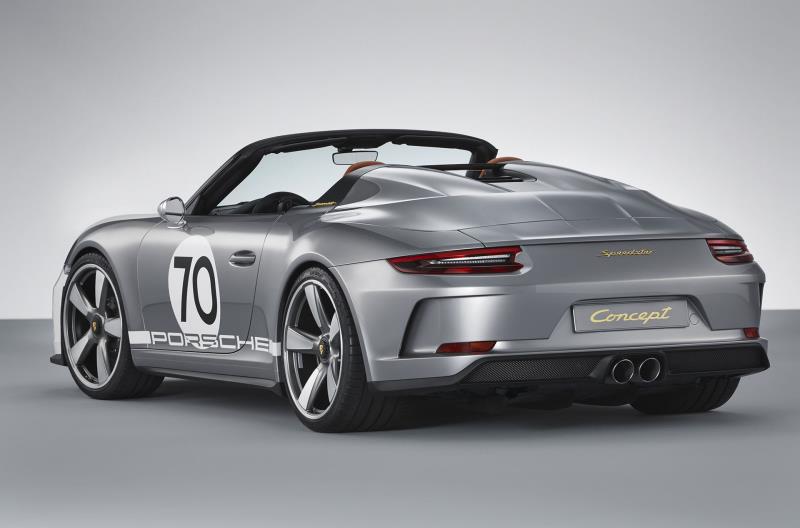 Strong partnership: Top performance meets fine craftsmanship
The cooperation between Porsche Motorsport and the Exclusive Manufaktur for the 911 Speedster Concept – as the first glimpse of a forthcoming Heritage design strategy – has historical roots, as the two divisions have the same origins. Porsche Exclusive once fulfilled special requests from racing customers, such as the legendary 935 Street designed with a flat nose. The last joint project between Porsche Motorsport and Porsche Exclusive was the Porsche 911 Turbo S Lightweight (Type 964) in 1992. With the expansion of motorsports at the Porsche AG Weissach Development Center, the two divisions parted ways. As specialists in manufacturing individually crafted vehicles, Porsche Exclusive concentrated on individual customer requests and limited production runs, exhibiting a great passion and attention to detail. Milestones include the 911 Sport Classic of 2009 and the 911 Speedster of 2010, of which only 356 were built. For the Porsche Exclusive Manufaktur, one-off product details are almost always possible, provided that they are within the boundaries of applicable regulations and that Porsche AG's requirements relating to quality and long service life are met.
Meticulously executed details of the 911 Speedster Concept clearly demonstrate just how well the revitalized collaboration between Porsche Motorsport and Porsche Exclusive Manufaktur works. The handcrafted two-tone paintwork, together with the so-called 'spears' on the front fenders, reference the brand's racing history. The same applies to the fuel tank cap positioned in the middle of the front lid in 1950s style, the exterior mirrors in the classic Talbot® shape, and the special design of the headlights. The transparent and opaque surfaces of the headlight covers resemble the shape of an 'X' – a further nod to the early years of Porsche in motorsport, when headlights were taped to protect the glass from stone chips and breakage. Both the wide B-pillars and the rear end are decorated with milled and gold-plated Speedster lettering, also a nod to the past. 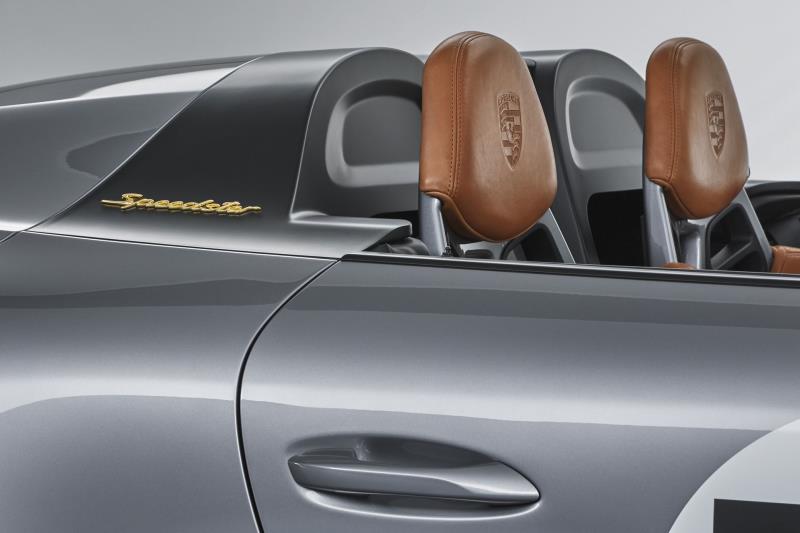 Tribute to a dream: 911 Speedster concept chronograph by Porsche Design Porsche Design has created a special timepiece for the new 911 Speedster Concept: the '911 Speedster' concept chronograph. Just like the vehicle, it is initially a one-off; subsequent production is currently under consideration. The chronograph case is made of a lightweight titanium, with a black titanium carbide coating to highlight its sporty design. The matte-black dial – similar to the instrument cluster of the 911 Speedster Concept – is characterized by its excellent readability. Instead of a small second hand, a function display with '911 Speedster' lettering positioned at 9 o'clock indicates that the movement is running. As a special gesture on the occasion of the 70th anniversary of Porsche Sports Cars, the '70' on the tachymeter is high-lighted in a contrasting color. The leather strap matches the color and material of the interior of the concept vehicle. The timepiece is powered by the first independently developed Porsche Design calibre, the Werk 01.200 with flyback function, load path optimized movement bridge and official COSC certification. The Swiss movement is the result of three years of development and state-of-the-art manufacturing methods, and impresses with precision, functionality and performance. 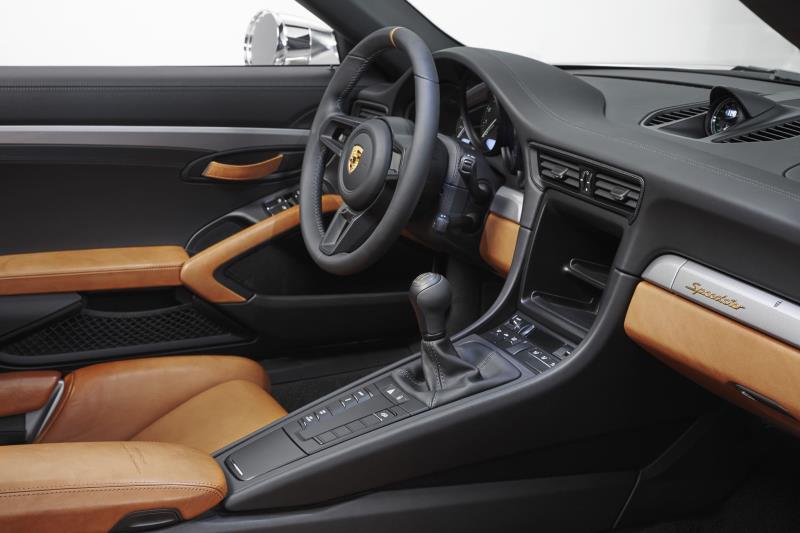 Looking back: Speedster models from Porsche made their debut 66 years ago Various Speedster models have been part of Porsche company history since 1952. They combine open-top driving pleasure with outstanding driving dynamics. The forefather of these models is the 356 1500 America Roadster, whose aluminum body was manufactured entirely by hand. It weighed about 130 pounds (60 kilograms) less than the 356 Coupe, and its top track speed of 108 mph (175 km/h) with its 70 hp flat-four engine was impressive at the time. That exclusive car was built only 16 times, and already featured key elements of the Speedster design with slot-in windows for the doors, a folding rain-cover top, and lightweight bucket seats. Porsche produced the significantly less expensive Speedster version in 1954, and quickly caused a sensation in the world of motorsports. For the first time, it combined the sheet steel body of the coupe with a flat windshield, reduced interior equipment, and a rain top. In the U.S., the 356 1500 Speedster cost less than 3,000 dollars and became an instant hit, particularly in places like California. Hollywood icon James Dean was also an enthusiastic racing driver and chose this purist model, which is dedicated solely to the sheer pleasure of driving. Other variants followed. The model reached its peak in 1957 with the 356 A 1500 GS Carrera GT Speedster. It was not until 1988 that a 911 Speedster variant was introduced, serving as the crowning highlight of the outgoing G-model generation. It was based on the air-cooled 3.2-liter six-cylinder engine with up to 231 horsepower and – unlike the 911 Speedster Clubsport concept car previously shown at the Frankfurt Auto Show – featured a wide turbo look. At the same time, 161 units with a regular Carrera body were also produced. They were intended for export and are particularly prized by collectors today. Between 1992 and 1993, 930 units of the 911 Carrera 2 Speedster of the 964 generation rolled off the production line. This time, the Turbo body was more rare with only 15 vehicles produced in this body style. Even rarer is the opulent 911 Carrera Speedster based on the 993 generation model. Only two of this model were developed by the Porsche Exclusive department – one for Ferdinand Alexander Porsche and one for a collector. Customers didn't get their hands on a Speedster version of the 911 again until 2010, when it debuted as a limited production run from Porsche Exclusive based on the 997 model generation. The sports car with the shortened windshield was produced in a strictly limited edition of 356 units.