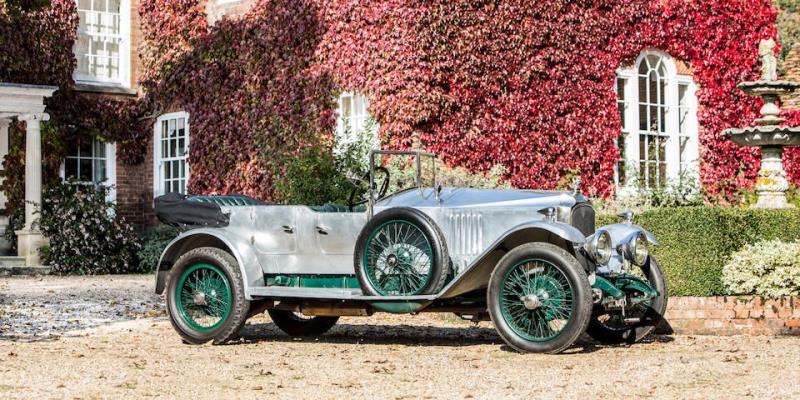 November 2, 2018 by Bonhams
A 1924 Vauxhall 30-98 OE Velox Tourer, recognized by many as the finest British sports car of the vintage era, originally owned by Hari Singh, the last Maharajah of Kashmir, is one of the highlights of Bonhams annual Bond Street Sale on 1 December. The motor car will be on display at Bonhams New Bond Street saleroom on Thursday 1 and Friday 2 November. The car is an incredibly special example of its kind, as the Maharajah - a particular and exacting ruler - wanted it to be as symmetrical as possible. He ordered an extra handbrake on the passenger's side, a door on the passenger's side (non-standard) and a split windscreen, though he drew the line at two steering wheels. The car passed through several important owners in India, Pakistan, the USA and the UK, including the legendary car collector and master watchmaker George Daniels and Ed Roy, an influential Bostonian in the motoring world and president of the Vintage Sports-Car Club of America. Hari Singh is one of the most important figures of Kashmiri history and is known as both a highly progressive ruler and the man who sparked the first Indo-Pakistan war. After a 'colorful' youth - he was once forced to pay nearly £300,000 to a Parisian courtesan as blackmail - he acceded to the throne of Jammu and Kashmir in 1925 and made quick changes to laws that he considered outdated and cruel. He made primary education compulsory, outlawed child marriage and allowed all lower castes access to places of worship. When British rule came to an end in 1947, the princely state of Jammu and Kashmir had the unusual option to join either Pakistan or India, or remain independent. In an attempt to maintain independence and power for as long as possible, Singh tried to play India and Pakistan off against each other, resulting in widespread protests. Rulers of states such as Kashmir were expected to respect the general wishes of their population, but Singh, a Hindu, leant towards India in spite of Kashmir's Muslim majority. Pashtun tribesmen from Pakistan invaded Kashmir and defeated Singh's forces in an attempt to seize the state during this period of uncertainty, prompting Singh to appeal to Prime Minister Nehru for help. Nehru agreed, but only on the condition that Singh would accede to India. To avoid further bloody conflict, Singh reluctantly obeyed. Sholto Gilbertson, Department Director, commented: 'This is the finest 30-98 ever offered by Bonhams, and its rare aluminum body and extraordinary specification makes it one of the most important examples in existence. Its fascinating history only adds to the significance of this motor car, and we look forward to offering it at our Bond Street sale.'