INFINITI'S MICHAEL BARTSCH ON THE ROAD AHEAD

Company press release.
At the 2014 New York International Auto Show, the head of Infiniti Americas, Michael Bartsch, talked about delivering on an ambitious growth strategy that has been outlined for the brand. Entering into its 25th year of selling premium automobiles in the U.S., Infiniti is on the move with an updated QX80, the new QX80 Limited, and an updated Infiniti Q70 that comes with the option of a new, extended-wheelbase model. Following is more from Mr. Bartsch: Michael Bartsch, Vice President, Infiniti Americas: The biggest focus is, first of all, from a personal point of view, is I had to get culturally adjusted. After being somewhere else for 20 years and coming over and moving from one very strong culture to a new strong culture, I had to learn that. But I think that the really interesting part about it is arriving when I did, and watching how the brand is transitioning, how it is being transitioned. That's been a bit of a challenge for everybody. I don't mean that in a negative point of view. It is simply that there has been a way of doing business for many years, and the reality of it is that in the premium segment the business model is different to the more middle, mass-market segment. And managing that transition is the big challenge at the moment. It will go on for a while yet, but I think the really important thing is that it has been a positive experience from all sides. It is a learning experience from all sides. We have a long way to go, but the vision is shared by everyone in the company.

Bartsch: New York is one of the premier retail motor shows in the United States. So it is a really important platform for communicating what the brand stands for. The opportunity that this presents is for us to launch two new models or two changes in the Infiniti brand. First one is the new Q70L. You can see from that there is a revised front end and a revised rear, that is picking up that very definitive Infiniti design language – the treatment of the lights, the new grille and so on. Then what you may not see quite so well is that this car has an added six inches in the floor plan of the rear – so, hence the 'L' long wheelbase. And it is a real limousine, a limousine on the outside but a very sporty heart on the inside. What is really nice about it is that you can sit in the back of that and cross your legs. That's the best way to put it; there is so much room in it. QX80 is a facelift, next-generation. There is a new grille, a new treatment on the lights, the fog lights and a change in the face of the car. But what is really interesting in that car is the QX80 Limited. We have quilted interior trims for the seats and the doors. We have burled timber in it, new looks in the wheels and the grille. So a whole elevated treatment in terms of luxury.

Bartsch: Building a luxury brand is evolutionary, not a revolutionary process. This is part of the evolution for Infiniti. We take one step at a time and we are building momentum. It is all part of the process. The next really big step for us comes with the launch of the Q30 at the end of 2015. What you are seeing now is a consolidation of the segments we are in. Right now we are only at eight models within the product range. By the time we get to 2020, we are going to be somewhere around 11 or 12 products. And we are going to be entering the small crossover segment that will come with the Q30. We've seen a touch of that with the concept car we showed at the Detroit Motor Show. But we also are going to be moving to the high end, getting into the areas that are traditionally dominated by BMW and Mercedes – the S-Class, the 7 Series, the aspirational element of the market. And so certainly we are going to be anchoring the brand with a halo car. So it is all part of a mid- to long-term product strategy.

Bartsch: It really is exciting, and I think that this car says a lot about the mindset and the attitude and the philosophy of Infiniti. Very young-minded. It is a good indication of what one can expect in terms of the excitement and the positioning of the brand. It's a good indication of how we see the brand expanding, because behind all of that is a clear indication of the intention to produce a performance arm within the Infiniti brand, which is part of the success formula. You see this with Mercedes and AMG, with BMW and M. The Eau Rouge is just the point of a long spear tip that we are going to be throwing into the market. Very exciting times. 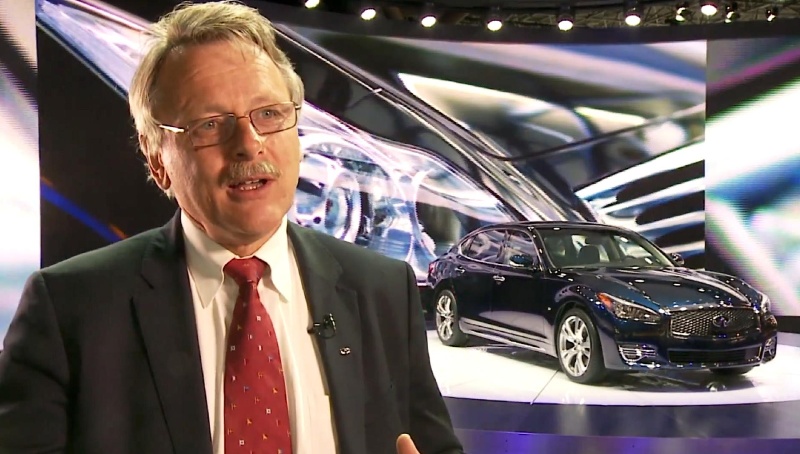