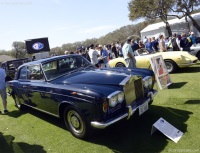 1967 Rolls-Royce Silver Shadow
Original Price: $19,700
Average Auction Sale: $20,783
Median Auction Sale: $15,304
Chassis Profiles
Total Production: 16,717
Rolls-Royce's most significant model since the Silver Ghost was the Silver Shadow which took 11 years to come to fruition and included many technical refinements. Under the code name Tibet, this model was the first Rolls-Royce to use monocoque or unitary construction.

The Silver Shadow had a more modern appearance in comparison to its predecessor, the Silver Cloud. The styling was a product of Crewe's in-house styling department, led by Jon P. Blatchley. Unitary construction, the absence of a separate frame resulted in more room for passengers, and easier access for luggage towing. It also featured much more practical updates that included disc brakes rather than drum brakes, and independent rear suspension with automatic level control instead of the previous live axle design of previous vehicles. The standard Silver Shadow had a wheelbase that measured at 5.17 meters in length.

During its first year of production, the Silver Shadow came at a base price of $19,700 and weighed 4,700 pounds. Two-door saloons were available from 1966 on, and a convertible was offered the following year.

The Silver Shadow also featured an impressive high-pressure hydraulic system that was licensed from Citroën and showcased dual-circuit braking and hydraulic self-leveling suspension. In the beginning, both the front and rear of the vehicle were controlled by the leveling system. This was updated to only rear leveling as most of the work was done from this area.

The Silver Shadow II was introduced in 1977. A bridge between the Silver Spirit that eventually followed in 1981. This newest version included technological advancement modifications to the front suspension that improved handling remarkably, along with rack and pinion steering. The bumpers were also updated from chrome to alloy and rubber.

To counteract power-robbing and ever-growing stringent smog regulation, the 6750cc V8 engine was updated. The aluminum-silicon cylinder block with cast iron wet liners and aluminum alloy heads continued to remain on the engine.
In 1969 an optional longer wheelbase variant added an extra 4 inches to provide additional rear-seat legroom. Several of these models were fitted with a privacy glass divider. These models today are still sought after by collectors today. These models were eventually renamed the Silver Wraith II in 1977. Updated with an Everflex covered roof, different wheel covers and a rear opera-style window the Silver Wraith II was quite a popular vehicle.By Jessica Donaldson