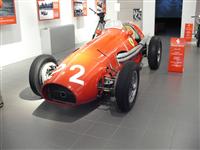 1952 Ferrari 500 F2
Average Auction Sale: $632,000
Median Auction Sale: $632,000
Chassis Profiles
Total Production: 6 1952 - 1953
The Ferrari F2 was raced for a couple of seasons where it was pitted against competition such as the British HWM, Maserati, Gordinis, and Connaughts. During those grueling seasons, the Ferrari 500 F2 proved its potential by being raced on many weekends throughout the years and emerging victorious in many of the races. The Lampredi powered car carried Alberto Ascari to two world titles and brought fame to the name, Ferrari. The car was not just limited to the factory; many privateers purchased examples and expanded the fame of the 500.

Ingegnere Lampredi was of the strong opinion that the 2-liter car did not need to be powered by a twelve-cylinder unit, but rather a smaller and lighter unit could provide many benefits. He convinced Enzo that a four-cylinder unit would be more competitive and fuel efficient. It would become one of the few Ferrari cars to be powered by a four-cylinder unit. The four-cylinder engine would be used in Ferrari sports cars and single seat racers during the 1950s. The engine was mounted in the front of the 4500 F1 derived chassis and sent power to the rear wheels. A fuel tank sat behind the driver. A small windscreen protected the driver from the elements. The front suspension was fully independent while the rear was a de Dion layout.

In 1952 'organ-pipes' were added to the vehicle. Running along the middle sides of the vehicle was an exhaust pipe which could burn the drivers elbows if not careful. A heat shield was installed right where the elbows might have hit to help ease the potential for a burn.

At the Modena Grand Prix, held in September of 1951, two factory cars had been created and were entered into the race in the Formula Junior class. It was not immediately entered into the F2 class because the competition was pretty stiff at the time and Enzo wanted to win. Ascari drove the car to a victory after averaging nearly 120 km/h.

Ferrari's big break came at the end of the 1951 season. Alfa Romeo announced their retirement from racing and as a result, the sport of Formula 1 went into a bit of a decline. For the 1952 and 1953 season, the World Championship was run under the two-liter Formula 2 regulations which was meant to keep the sport competitive. Ferrari and their 375 had been poised to dominate the season but these regulations meant a new engine was required. The Lampredi four-cylinder unit was modified with four Weber DOE 45 single-barrel carburetors, modified camshaft, and a new fuel system. The bodywork was simplified and the brakes were enlarged.

The debut of the new racer was at Siracusa, a non-championship race, where the 500 F2 easily won the race. The following two races, at Pau and Marseilles, were also non-championship races which the car emerged victorious. During the 1952 season, Ascari drove the 500 to six of the seven Grand Prix victories. The seventh Grand Prix victory was won by Taruffi, Ascari's teammate. The team consisted of three works cars driven by Ascari, Taruffi, and Farina.

Throughout the seasons, the cars were given slight modifications. Ascari's car had two slots in the tail to provide additional cooling to the oil tank and transmission. Some of the cars were given deflector tabs over the front wheels. The works cars had a slightly more tapered nose and were void of the mesh radiator grille.

The cars first defeat came at Reims at the hands of Jean Behra while driving a six-cylinder Gordinin. Ascari and Villoresi had retired prematurely from the race due to their vehicles magnetos overheating. The cars magneto arrangement was reconfigured and ready for the next Grand Prix race. The new configuration proved successful and the cars finished in the top three positions. This trend would continue for many of the following Grand Prix races. The team was victorious at the German Grand Prix at Nurburgring, and the Dutch Grand Prix at Zandvoort. Ascari went on to be crowned the French National Championship and later, the World Championship.

For two seasons, 1952 and 1953, the 500 F2 dominated. In 1954 the World Championship was again run under F1 regulations with 2.5-liter formula rules. Ferrari responded by increasing the displacement size of their four-cylinder engines to accommodate the new rules, but they were unable to keep pace with the six-cylinder Maserati's and eight-cylinder Mercedes-Benz racers.