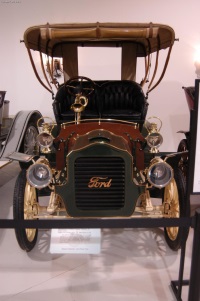 1905 Ford Model F
Original Price: $1,000 - $1,250
Average Auction Sale: $60,709
Chassis Profiles
For the 1904 model year, the Ford Motor Company introduced three new models, the Model B, C and F. At the time, the Ford Company produced around eight percent of all cars build in the U.S. and the Ford Motor Company of Canada was also founded this year. Also in 1904, Ford opened its first dealership in Detroit on Jefferson Avenue. The Ford Model F tourer was priced at $2,000 for 1904.

The following year, 1905, Henry Ford did his best to improve his line of vehicles and the Ford F was now more dependable. This same year the Ford Motor Company was moved from the Mack Avenue factory to a much larger one on Piquette Avenue. For this year the Ford Model F's price rose from $1000 to $1,200 while the prices on all other models remained the same. Unfortunately even with all of these updates and improves, the new 'Truck' sales were still slightly less than the previous year.