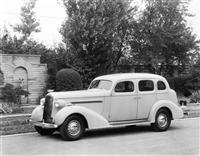 1936 Buick Series 60 Century
Produced: 24,364
Original Price: $1,035 - $1,135
Average Auction Sale: $38,500
Median Auction Sale: $38,500
Chassis Profiles
In 1930 Buick introduced their Series 60 which served as a replacement for the Series 129. There were seven body styles to select from, all sitting atop a 132-inch wheelbase. The four-door phaeton with seating for seven cost the least, selling for nearly $1,600. Only 807 examples of this body style was produced in 1930. The Most expensive body style was the Limousine, also with seating for seven, and demanded a price of nearly $2,100. This body style was the most exclusive, with only 690 examples produced. The most popular setup in this series was the four-door Special Sedan which had seating for five and sold for $1,760. A total of 12,508 examples were produced.

The Series 60 cars were powered by a 331 cubic-inch six-cylinder engine that produced 80 horsepower. The cars were given many amenities such as fully carpeted interiors, Fisher Vision & Ventilating windshields, internal-expanding four-wheel mechanical brakes, and Lovejoy two-way shock absorbers. The standard paint color for the Buick Series 60 cars was Premier Green.

For 1931, the Series 60, now known as the Series 8-60, was similar to the Series 40 but had a larger wheelbase and engine. All body styles had a passenger-side windshield wiper as standard equipment. The open model cars were given genuine leather while the closed cars had either mohair plush or cloth of the finest materials. Mechanical four-wheel brakes, rubber engine mountings, Synchromesh gearbox, oil temperature regulator and a fuel pump were all standard equipment. The standard engine was an eight-cylinder unit which displaced 272 cubic-inches and was capable of producing 90 horsepower.

The body styles were similar to the Series 50 lineup, but the Series 60 did not have a two-door sedan or convertible coupe. The wheelbase measured 118-inches. The most popular body style for the 1931 Series 60 was the Sedan with four doors and seating for five. A total of 30,665 were produced of this body style and cost a base price of $1,355.

For 1932, Buick added to additional body styles to the Series 60, now offering a total of seven models to select from. The two new additions were the Victoria Coupe and Convertible Phaeton. The Convertible Phaeton offered seating for five, leather interior, dual rear ashtrays, dual side-mounted spare tires, weather-proof rear-mounted trunk, and a choice of either wood or wire-spoke wheels. The new Victoria Coupe was also a two-door model with seating for five. It featured a large door window and a large rear side window. There was a rear-mounted spare tire and wood-spoke wheels as standard equipment. The cost to own this body style was $1,290 with a total of 1,514 customers opting for this vehicle. The most popular body style continued to be the four-door sedan.

The 1933 Series 60 Buicks sat atop a 127-inch wheelbase and were powered by a 272 cubic-inch engine that produced 97 horsepower. A slight increase in power over the prior year. Styling was similar to the Series 50. Mechanical brakes were standard, as was the Delco-Remy ignition, Fisher No-Draft ventilation, full-cushion engine mounting, dashboard-mounted starter button, crankcase ventilation, skirted fenders, and Synchromesh gearbox. There were five body styles to select from, including the Convertible Coupe, Sport Coupe, four-door Sedan, Victoria Coupe, and Convertible Phaeton. Sales slowed considerably for 1933, with only 7,450 examples of the four-door Sedan - its most popular body style in the Series 60 range - sold. The economical condition caused by The Great Depression was to blame, as few were able to purchase a vehicle.

The Series 60 saw slight improvements in 1934, now sitting on a 128-inch wheelbase, powered by a 278 cubic-inch engine which produced 100 horsepower, and saw the addition of a new Club Sedan body style. Sales for the four-door Sedan was just over 5,000 examples. The Club Sedan was the most popular body style this year, with a total of 5,395 examples sold. It surpassed the four-door sedan by around 224 sales.

Sales continued to decline in 1935, with the most popular body style being the Club Sedan and sales for this settled at a dismal 2,762. The four-door Sedan only found 1,716 buyers. Again, this was due to the economical depression of this era.

In 1936, the Buick Century appeared in the Series 60 lineup. The name 'Century' was used to imply a top speed of 100 mph; during the 1930s the 'Century Mark' was used as a way of distinguishing 100 mph cars. The 100 mph top speed in the Series 60 was due to a new 320 cubic-inch straight-eight engine that produced 120 horsepower and 238 foot-pounds of torque.

Styling changed in 1936 with the Series 60 now featuring the new Art deco look. They featured founded grilles, vertical bars, and rearward sweeping lines. The wheelbase measured 122-inches and there were five body styles to select from. Sales were very strong, with over 17,800 examples of the four-door sedan being produced. The next most popular model in the Series 60 range was the two-door Victoria Coupe which saw production reach 3,762 units. The base price for a Series 60 was just under $1,100; the most expensive was not that much more, selling for $1,135. All of the Series 60 was equipped with a sliding gear three-speed transmission with floor shift controls. Hydraulic brakes could on found on all four corners.

1937 was another big year for the Series 60 Century. Sales surpassed 20,000 for the four-door Sedan. The wheelbase on all Series 60 body styles grew to 126-inches and the 320 cubic-inch engine produced 130 horsepower. This engine was used on the Series 60, Series 80, and Series 90. A two- and four-door slopeback sedan was added to the list of body styles, now totaling seven to select. The Century's had an all-steel Fisher Unisteel 'turret-top' body that allowed a wider instrument board, and more interior room for the passengers.

Horsepower increased in 1938, now rated at over 140. Torque was up to nearly 270, which was more than adequate to satisfy the 100 mph speed that the Century name demanded. The slopeback two-door sedan lasted only one year, as it was no longer available in 1938. Sales dipped a bit, now with the high-selling four-door sedan only fetching 12,364 willing buyers. The decline was by more than 6,000 in comparison to the prior year. All other body styles hovered around 1,000 to 2,000 production units for 1938.

Styling changes continued to occur and for 1939 that meant larger windows. In the rear, the window was now a one-piece fixture that was over 20 percent larger than in prior years. Similar increases in size could be found in all windows, with the front receiving the largest increase at over 25-percent.

The wheelbase and much of the mechanical components remained unchanged over the prior year. The interior was now mahogany garnish moldings. Buyers had the option of selecting the standard running boards or the optional streamboards.

As Buick closed one decade and entered into another, they chose to enlarge the Series 60 Century by 5.5-inches. A five-passenger business coupe that had a rear seat was added to the list of available body styles. Only 44 examples were produced and carried a price tag of $1,130. The most popular body style was again the four-door Touring Sedan, with 8,597. This figure was considerably off in comparison to the prior years. In fact, total sales for all body styles in the Series 60 range was less than 10,000. Other Series, such as the Series 50 and Series 40 was extremely popular, with over 200,000 units produced between the combined series.

Buick responded to this dwindling interest in the Series 60 by reducing the number of body styles available, now registering just three. The list included the popular Touring Sedan, which accounted for 15,027 units, the 2-door Sedanet which saw production reach 5,521, and the 2-Door Business Coupe with 220 units being produced. The cars had a 126-inch wheelbase and an overhead-valve eight-cylinder engine that displaced 320 cubic-inches. The 'Fireball' engine featured dome-shaped pistons and combustion chambers. Horsepower was rated at an impressive 165 with torque at nearly 280 foot-pounds. This potent power-plant with the slender body styles made the Buick Century America's most powerful automobile.

In 1942 Buick offered a Sedan and two-door Sedanet. Combined sales for the two body styles were around 4,500. The cars retained their 126-inch wheelbase and 165 horsepower engine. The frontal styling characteristics of the prior year were carried over in 1942.

As America entered into the Second World War, automobile production was put on hold. When production resumed in 1947, the Series 60 was no longer offered. The Century name would appear in just a few years and would continue to adorn Buicks for many years to come.
By Daniel Vaughan | Aug 2007