The Ferrari 166 was officially introduced at the Turin Salon in September of 1948. The body was courtesy of Touring utilizing the patented 'superleggera' technique. The alloy coachwork was well proportioned, covering the narrow tube skeleton structure. The frame consisted of an oval tube cross-section ladder with an X-shaped cross member. The short wheelbase car was given a Giacchino Colombo-designed V12, which would become the basic structure that would serve Ferrari road and race car for the next two decades.

In total, there were a mere 33 examples of the 166 MM produced between 1949 and 1951. Most of the 166 models were given Carrozzeria Touring coachwork in either Barchetta or Berlinetta forms. 26 were Barchettas and 7 were Berlinetta models. Of the seven Touring-bodied Berlinettas, only five were the Le Mans Berlinettas, named for Ferrari's victory at the 1949 24 Hours of Lemans in a 166MM.
By Daniel Vaughan | Mar 2009 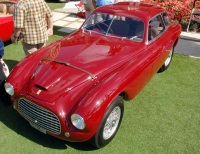 Chassis 006C, 010I, 0121 and 016I rested on a wheelbase that measured 95 inches. In 1948 two Spyder Corsas were built with a shorter, 88-inch wheelbase and with the frame tubes slung under the rear axle, as opposed to being over the rear axle. It is believed that these two chassis were 008I and 014I.

This new chassis design was used in the 166MM Touring Barchetta that appeared in the fall of 1948 at the Turin Auto Show. These cars would go on to win the Mille Miglia, Le Mans the Spa 24 Hours in 1949.
By Daniel Vaughan | Apr 2008