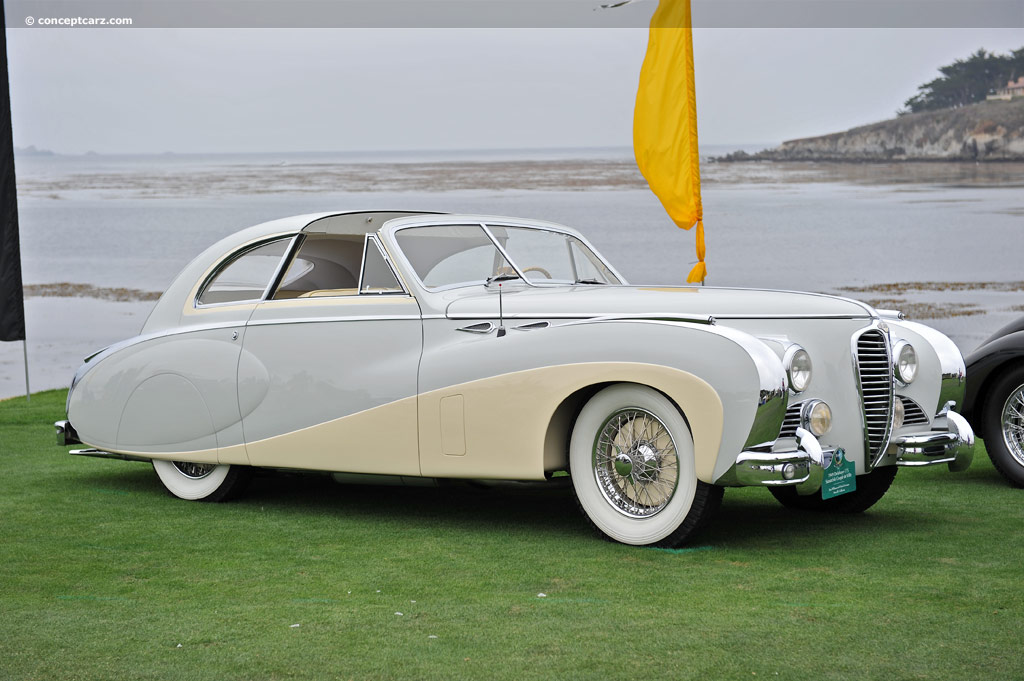 Delahaye was initially based at Tours and from 1906 in Paris. They built their first automobile in 1894 and soon diversified into commercial vehicle manufacture.

The Delahaye 135 was produced from 1935 until 1954, available in a variety of body styles, and designed by Jean François. The sporty touring car, known as the 'Coupe des Alpes' after its success in the Alpine Rally, straddled both the pre-war and post-war era. Introduced in Paris in 1935, it had a new chassis with the same 3.6-liter, six-cylinder engine first used in the earlier Type 138.

The Type 135 had cable-operated Bendix brakes and an independent, leaf-sprung front suspension, with a live rear axle. The transmission was either a partially synchronized four-speed manual or four-speed Cotal pre-selector transmission. Other standard features included 17-inch spoked wheels.

A year later, in 1936, Delahaye introduced the 135M, with a slightly larger engine with improved horsepower and offered with a choice of single, dual, or triple carburetors. It was suitable on the road or the track, taking the top six places at Marseilles in 1936. It further improved upon its reputation by taking 2nd overall at Le Mans in 1937 and 1st, 2nd, and 4th the following year. Outside of Le Mans, Delahaye 135s also took 1st at the Rallye Monte Carlo in 1937 and 1939. Prince Bira won the 1938 Donington 12-Hour Sports Car Race in Prince Chula's example and went on to take victory in Brooklands' 'fastest road car in England' race.

After World War II, the production of the Type 135 resumed using the same 3.6-liter engine used prior to the war. By this point in history, the company was struggling, as the French government had placed large taxes on cars with a displacement over three liters.

This Delahaye M 135 was bodied by Jacques Saoutchik in Neuilly, a suburb of Paris, and was exhibited on the Saoutchik stand at the 1949 Paris Auto Salon. The first owner was George Dawson, a wealthy Englishman, who then sold this Delahaye to a Mrs. M....[continue reading]

First shown at the Paris Auto Salon in 1949, this is a unique and flamboyant Delahaye with coachwork of Saoutchik. It was built specifically for the Paris Auto Salon and with an eye for luxury rather than speed. The design of the body and interior wa....[continue reading]

The Cabriolet 'Malmaison' design was based on pre-war lines, with front fenders that had a long and high dramatic sweep, and were now integrated into the bodywork. Marcel Pourtout's design was influenced by Figoni et Falaschi's work on Delahayes chas....[continue reading]

The origins of Delahaye lie in a company set up as long ago as 1845 to produce brick-making machinery. Emile Delahaye was a railroad engineer who designed rolling stock for the French and Belgian railroads. He built his first car in 1895. Delahaye to....[continue reading]

Henri Chapron showed this car at the Paris Auto Salon in 1949, where it was purchased by Monsieur Moiroud from Morocco. In 1958 an American Air Force pilot serving in Morocco purchased the car and used it as a daily driver while in Casablanca. He shi....[continue reading]

The Delahaye 135, also known as 'Coupe des Alpes' after the car's success in that Alpine Rally, was first presented at the Paris Auto Salon in 1935 and production continued until 1954. Around 2,000 of these sporty grand tourers were built. ....[continue reading]