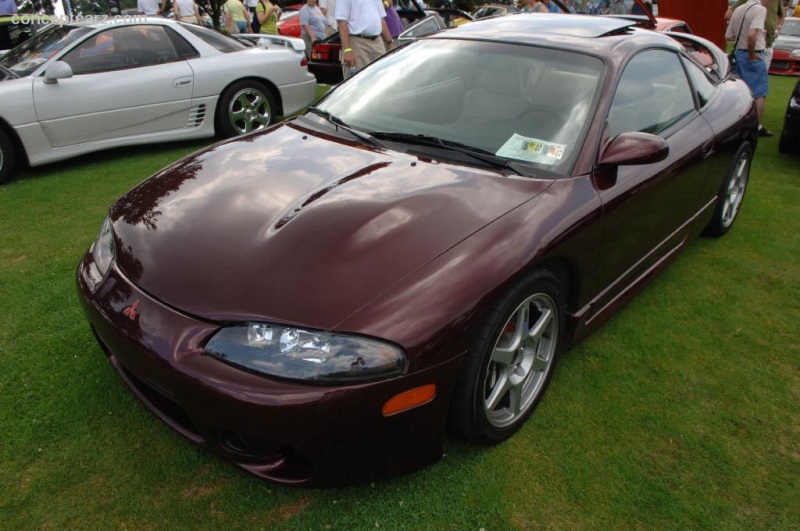 The Mitsubishi Eclipse was introduced in 1989 and has remained in production in the modern era. The name 'Eclipse' came from a eighteenth century English racing horse which won 26 races. Since its inception, it has been redesigned on a number of occasions, and there has been four distinct generations. The first two generations were very similar and shared many mechanical components and design features. The third generation was a redesigned vehicle sitting a top a new platform.There were four trim levels available for the first generation Mitsubishi Eclipse. The top-of-the line trim level was an all wheel drive version; the others were front-wheel drive. Both were available with the optional turbocharged engine. The trim levels included the base, GS, GS-T, and GSX. The base engine was a 1.8-liter 8-valve SOHC engine that produced just under 100 horsepower. The GS with DOHC was a 2-liter engine that raised horsepower to 136. The turbocharged version had over 180 horsepower.Attached to the engine were a five-speed manual gearbox as standard equipment. A four-speed automatic was available for an additional cost. The AWD models included a limited-slip center differential and output shaft for a transfer case that was different than the FWD versions.
The second generation of the Eclipse began production in 1995 and continued into 1999. A Spyder version was now available, which offered convertible driving. Horsepower on all engines improved; the base 2.0-liter engine produced 140 horsepower. The 2.4-liter engine produced 141 and the 2.0-liter engine with turbocharger produced 210 horsepower.
There were now seven trim levels available including the RS, GS, GS Spyder, GS-T, GS-T Spyder and GSX.
In 1997 the model was giving aesthetic improvements. The front grille was updated, the headlights reshaped, and the driving lights became smaller and round. The reverse lights were moved away from their central position.Built along side of the Eclipse was the Eagle Talon which was produced until 1989 when Eagle went out of business. The Talon was available in Base, ESi, TSi, and TSi AWD. Minor styling changes between the Talon and the Eclipse segregated these two vehicles.The third generation of the eclipse appeared in 2000 and remained in production until 2005. It was a drastic styling change from its pior-self, with styling cues borrowed from the Mitsubishi SST design study which had debuted at the 1998 North American International Auto Show. The Eclipse now shared a platform with the 8th generation Galant. Weight and size increased, and so did the engines displacement size. The base engine was a 2.4-liter four-cylinder engine that produced 140 horsepower. The 3.0-liter V6 engine raised horsepower to the tune of 200 horsepower. The GTS trim was introduced in 2003. It had a 10:1 compression ratio and an improved Variable Induction Management air intake system that raised horsepower by 10. The fourth generation of the Eclipse was shown at the 2005 Detroit Auto Show. The big news was the 3.8-liter V6 engine that raised horsepower to 263. The base 2.4-liter engine is rated at 165 horsepower. There is only one drive type available - front wheel drive. The Spyder version was released for 2007 at the North American International Auto Show.
By Daniel Vaughan | Jul 2007