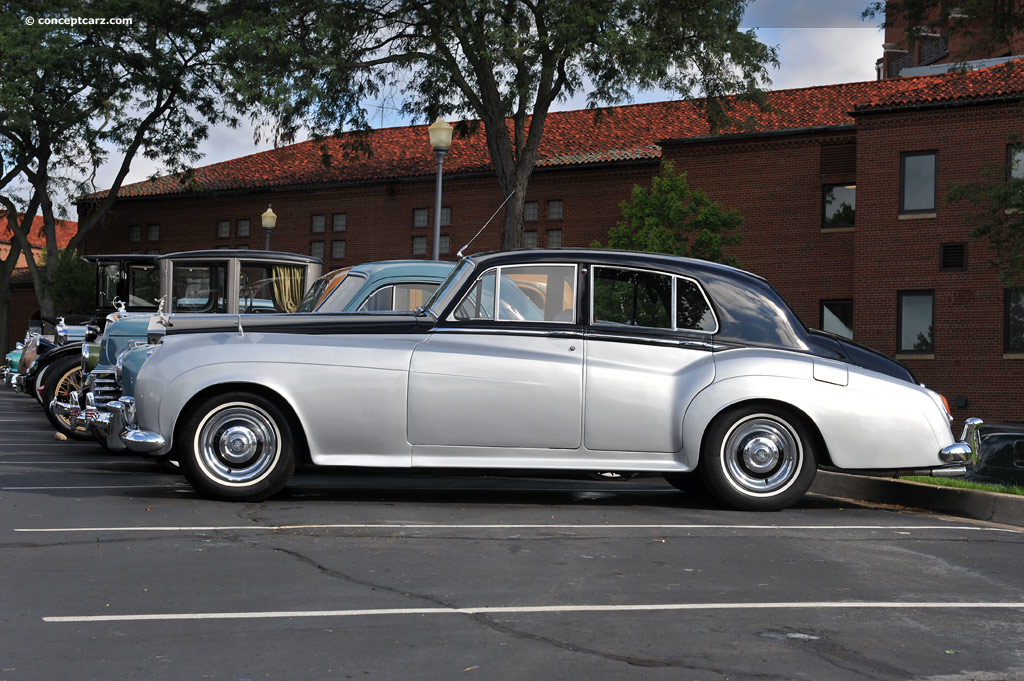 The all-new Rolls-Royce Silver Cloud and Bentley S-Type were introduced in April of 1955, and built as a replacement for the ageing Rolls-Royce Silver Dawn and Bentley R-Type. Both wore sleeker bodywork on a new box-section separate chassis, replacing the unitary construction setup for the first time on a Rolls-Royce. The brakes and suspension were improved, with the latter featuring electrically controlled damping. The engine displacement rose to 4,887cc and adopted a six-port cylinder head which helped boost power on the dependable inlet-over-exhaust six-cylinder engine. An automatic (4-speed GM Hydramatic) transmission was now standard with power-assisted steering offered as optional equipment.

Rolls-Royce offered 'standard steel' factory bodwork, while coachbuilders continued to offer bespoke creations to discerning customers' unique specifications. The factory did not offer a convertible or drophead coupe, so a coachbuilt car was the only option if one's preference was an open-top Rolls-Royce. The soon-to-be-merged firms of H.J. Mulliner and Park Ward Ltd. (the latter already owned by Rolls-Royce) were by far the most successful of this type, lasting into 1963. These hand crafted styles fetched a hefty premium, with H.J. Mulliner's drophead coupe being priced some 50% above the standard Silver Cloud four-door sedan, which was already among the world's most expensive cars. Mulliner would complete 21 (possibly 22) aluminum-bodied drophead coupes (style number 7410) on the Silver Cloud I chassis.

The Rolls-Royce Silver Cloud and its Bentley S1 stablemate were the last models powered by the venerable straight six in its most developed form. The Silver Cloud I would remain in production through 1958, with a total of 2,238 examples produced. The Silver Cloud II was introduced in 1959 and came equipped with a new Rolls-Royce developed 6.2-liter V8, which greatly improved the vehicle's performance. Electrically operated windows were now optional and power steering became standard. After 2,417 examples had been produced, Rolls-Royce introduced the Silver Cloud III, which would remain in production through 1966 with 2,044 produced. Improvements included a slight weight reduction, interior changes, and slightly altered external dimensions. The engine received a 2-inch SU carburetor, nitride hardened crankshaft, and the compression ratio increased to 9:1. External changes included slightly increased slope of the bonnet, reduction i the radiator grille height, and a four-headlamp layout.
by Daniel Vaughan | Oct 2019

The Silver Cloud Rolls-Royce and the Bentley S-Type, both introduced in early 1955, were built with unitary construction. They had improved brakes and suspension. The engine was enlarged to 4887cc and modified with a six-port cylinder head which ga....[continue reading]

There were 2,238 Rolls-Royce Silver Cloud I models produced from 1955 through 1959 and by the time the Silver Shadow arrived in 1965, 7,248 units had been produced. They were the zenith of prestige and luxury and powered by an overhead valve V-8 engi....[continue reading]

The Rolls-Royce Silver Cloud was introduced in 1955 and was designed by J.P. Blatchley. It was given the traditional grill and headlights but moved more towards a modern, integrated appearance. Just like the prior models, the Silver Cloud was built o....[continue reading]

This Rolls-Royce Silver Cloud I wears an aluminum-bodied drophead coupe by H.J. Mulliner, style number 7410. A total of 21 examples of this design were built, and twelve were on left-hand-drive chassis. ....[continue reading]

This Rolls-Royce Silver Cloud Convertible is a right-hand drive example with a newer interior and an automatic transmission.....[continue reading]

The 1929 Duesenberg Blue J and 11 collector cars from the William A. C. Pettit, III Collection will be sold at Gooding %26 Companys Pebble Beach Auctions Estate Proceeds will benefit the Shri...

Total 1957 Rolls-Royce Silver Cloud production: 0
© 1998-2020. All rights reserved. The material may not be published, broadcast, rewritten, or redistributed.