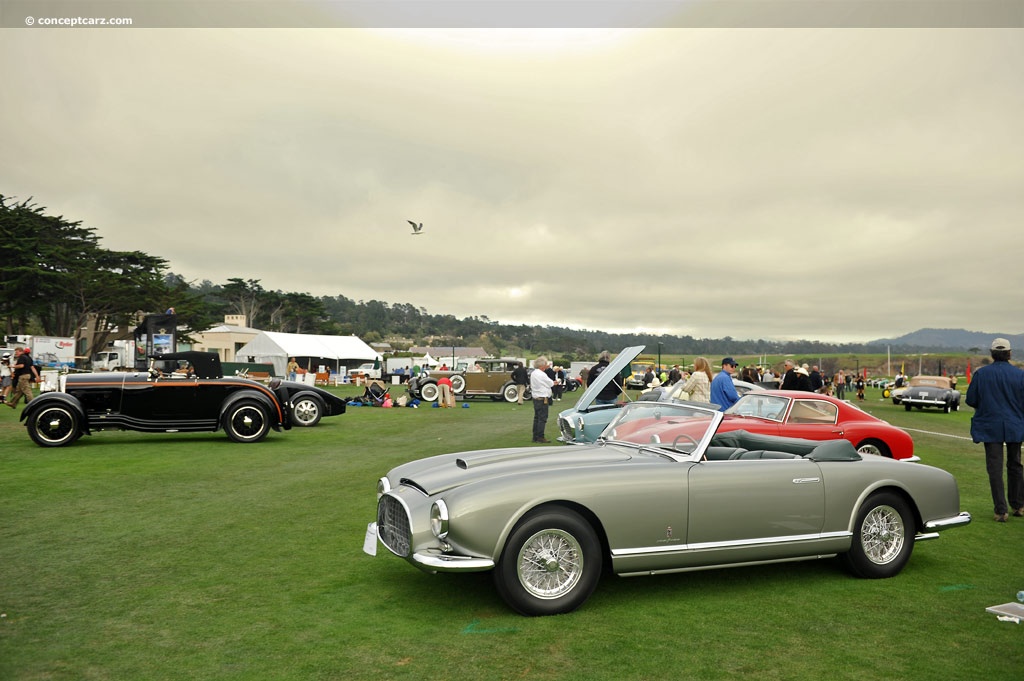 This version was a touring version. It did not have as much horsepower as the 340 even though it had the same engine. The transmission varied as well. The 342 had a fully-synchromesh four-speed transmission instead of the racing version which was a non-synchromesh five speed. Other variations from the 340 included a heavier rear-axle and larger track dimensions.

Unfortunately, only 6 of the 342 America's were ever produced.Ferrari quickly adapted to changing conditions, both on the race courses and on the highways. The first important indicator of its flexibility - and further bolstering its well-known drive to win races - was the development by Aurelio Lampredi of a larger version of the original Colombo-designed Ferrari V-12. The short-term objective was to take advantage of new Grand Prix regulations permitting naturally aspired engines of up to 4.5 liters to compete with supercharged 1.5-liter engines like Ferrari's original V-12 and the Alfa Rome 158 Alfettas. Larger displacement also had advantages in reliability and performance in sports-racing cars and gran turismos, leveraging additional competitive and economic benefits from the time and effort invested in designing, building and developing Lampredi's engine.

Designed with the basic parameters of Colombo's V-12 to fit with minimal changes in Ferrari's existing chassis design, with a 60-degree angle between the cylinder banks and a single overhead camshaft on each bank, Lampredi's engine was, of necessity, longer. Piston stroke grew from 58.8 mm to only 68 mm but the bore of the design-capacity 4.5-liter engine increased to 84 mm from the Colombo's 68 mm bore in the 212 necessitating a longer cylinder block with 108 mm between cylinders, up from the 90 mm in the original Colombo engine.

Designed from inception with individual intake ports in the cylinder heads, the Lampredi engine utilized hairpin valve springs similar to the Columbo V-12 but had roller cam followers. The other major design difference between the two was Lampredi's solution to sealing the cylinders to the head. Instead of removable heads with gaskets, the new 'long-block' engine employed cylinder liners that screwed into the heads and required only a low-pressure oil-water seal at the liners' seat in the cast aluminum cylinder block. Routine service was more difficult, but it resolved a long-standing reliability issue with the Colombo engine.

Lampredi's new engine was successful in taking the Grand Prix championship from Alfa Romeo and its superior power and torque were quickly and successfully employed by Ferrari in sports cars competition. The first sports car to appear with the Lampredi engine followed almost immediately after the appearance of the 375 Grand Prix, at the Paris Salon in October 1950. This was the 340 America and it was built in a bewildering array of styles and specifications ranging from lighter-weight berlinettas and spyders to luxury coupes and cabriolets.

The dual-purpose 340 America's successors became specialists. The 340 Mexico and Mille Miglia were refined and developed specifically for competition. The very limited-production 342 America satisfied Ferrari's most exclusive clients' desires for a luxury gran turismo.

The 342 America
The 342 America was Ferrari's most exclusive model of the period and represents the first series of Speciales designed by Pinin Farina. In the two years it was produced only six were built. Each example was unique and enjoyed a significant destiny. After King Leopold of Belgium and Enzo Ferrari each reserved one for himself, chassis 0246 AL became the Geneva Show Car. The first 342 America was bodied by Vignale and the remaining five by Pinin Farina with the entire series producing three cabriolets and three coupes. The 342 America employed a long 2,650 mm wheelbase because of the 'long block' Lampredi engine's length. It also served to fulfill the model's intended purpose as a comfortable, powerful, grand touring automobile with room for occupants and reasonable luggage capacity. With the 342 Americas and, simultaneously, the 250 MM Berlinettas, Ferrari and Pinin Farina began a solid working relationship that has continued unabated to this day, 53 years later.

In addition to the longer wheelbase Ferrari widened the 342 America's track dimensions by 47 mm (1.85') at the front and by 7 mm (2.75') at the rear. A reinforced live rear axle with a 4-speed, now synchronized, gearbox was used. Standard power was modest, rated by Ferrari at some 200 brake horsepower with a pump-fuel friendly 8:1 compression ratio. 342 Americas could be ordered with special factory tuning, producing up to 300 brake horsepower. King Leopold's 342 America was one such example.

In a departure from Ferrari's exclusive practice of reserving even chassis numbers for its competition cars, Ferrari acknowledged the competition heritage of the Lampredi V-12 powered 342 America by conferring even numbers of all six of them, a convention that was not followed by the succeeding 240 Europa and 375 America models. The 'AL' (America Lungo) suffix attached to these few cars signified the long wheelbase chassis and all were built with left-hand drive. Interestingly, the model designation, 342, is the individual cylinder capacity of the America's 4,101 cc engine. The Ferrari 340, with exactly the same dimensions as the 342, is an aberration from convetional Ferrari model numbers at the time and added further significance to Ferrari's first series of Speciales, later to be followed by the Superamerica and Superfast models.Source - Gooding & Company

Ferrari built five 342 Americas with Pinin Farina coachwork, including this 342/375 America cabriolet (0234AL) for King Leopold III of Belgium. One of two cabriolets powered by the Lampredi V12 favored by Ferrari for Grand Prix racing, these 342 Amer....[continue reading]

This Ferrari, chassis number 0248AL, is one of only six 342 Ferraris ever manufactured. It is also one of only two Pininfarina 342 Cabriolets. It was shown by Ferrari at the New York Auto Show in 1953 and was the first grand touring Ferrari to ever h....[continue reading]

The Ferrari 342 America was a luxurious and powerful custom road car for the factory's best clients. They were built on an extended 2,650-mm wheelbase and powered by an enlarged 200 horsepower Lampredi V-12 engine. In total, just six examples were bu....[continue reading]