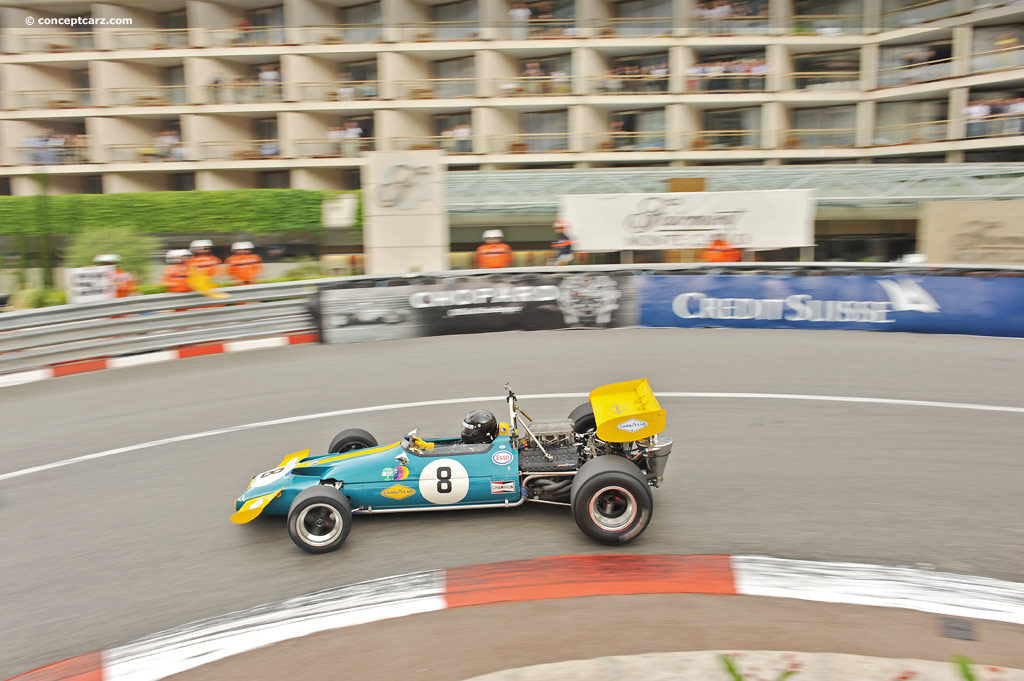 Sir John Arthur 'Jack' Brabham was born in early April of 1926 in Sydney Australia. He attended school until the age of fifteen when he left to pursue a career as a mechanic at a repair garage. During World War II, he served in the Royal Australian Air Force. After serving his country, he owned a repair business. His interests and passions were also with racing and soon he was competing in midget car competition. During his first season, he proved he had the mechanical skill and driving talents necessary to become a champion; he won the NSW Championship. More importantly, he had formed a partnership with Ron Tauranac, who would become Brabham's F1 designer and remain with the company during Jack Brabham's racing career. When Brabham retired as a driver at the conclusion of the 1970 season, Tauranac briefly owned and managed the team. It was sold a short time later to Bernie Ecclestone. Tauranac's resume and accomplishments in the field of automobile racing is extensive, including the formation of the Ralt marque and the Theodore Racing F1 car.

Brabham's Grand Prix racing debut was in 1955 at the British Grand Prix in a Maserati 250F. Soon, he had joined the Cooper Car Company team, driving one of their mid-engine machines. The Cooper Cars were among the first to prove the benefits of the mid-engine placement. It was an untraditional design but offered several advantages over the front-engined layout. After many successful races, other marque's began following in the footsteps of the Cooper Cars and put the 'Cart before the Horse.'

Brabham won the World Championship in 1959 while driving a Cooper car with Coventry Climax power. He repeated this victory the following year. He brought the Cooper racer to the Indianapolis Motor Speedway in 1960 where he managed a ninth-place finish. The car had been running as high as third during the race. Many had mocked the awkward and unusual design of the mid-engined car, but the solid performance at the 500-mile race had many re-thinking the designs of their cars. Brabham would return to Indy in 1964, 1969, and again in 1970.

Brabham Racing Organization
In 1961, Brabham and Tauranac formed the Brabham Racing Organization. The first few years of racing were rather unfruitful for the team and they endured very little success. The team had little financial backing and expenses were always monitored closely. In 1961, only a single car was created. The following year, 11 examples of the BT2 Formula Junior racers were constructed. The BT3 Formula 1 car was created in 1963 and driven by Jack Brabham to many impressive finishes. Brabham drove it to a fourth-place finish in its second Grand Prix outing. This accomplishment led Jack Brabham to become the first driver to ever score world championship points in a car bearing his own name.

The single-seater cars that followed the BT2 and BT3 shared many similarities in design and components. They were constructed from a spaceframe chassis and did well in competition in the entry-level formula series. More was needed to compete strongly in the higher formulas. Even though this was the case, Dan Gurney was able to pilot a BT7 to the Formula 1 victory at the 1964 French Grand Prix.

By 1966, the Brabham Racing Organization was an established marque with growing financial stability from car production. Rule changes in 1966 increased the displacement size from 1.5-liter to 3-liters. Brabham began work, in conjunction with Coventry Climax, on a flat-16 cylinder engine. The engine was intended for the BT19, but development delays meant the project was sidelined and a suitable engine was required. A replacement was found in Australia. The engine was called the Repco, derived from an all-aluminum Oldsmobile engine, and developed by Frank Hallam and Phil Irving. John Judd provided additional assistance to enlarge its displacement size to nearly 3-liters. The result was nearly 300 horsepower which was adequate. Torque, though, was rather low.

The V8 Repco engine was mounted in a one-off BT19 and driven by Jack Brabham to many victories, resulting in his third World Championship. Part of his success was that the Brabham marque was one of the only teams that had a suitable three-liter car. Few others had been able to adapt from 1.5 to 3.0-liter form. The potent engine, nimble car, and talented driving had given Brabham his third World Championship title.

The BT20 was introduced part-way through the 1966 season and driven by teammate Denny Hulme. Hulme navigated the car to a victory at the Monaco Grand Prix, the highlight of the car's career, and retired a short time later. For the following season, two new models were introduced. The BT23 was intended for Formula 2 competition while the BT24 was built for Formula 1. The BT24 was powered by a Repco engine which had been tuned to produce 330 horsepower. By now, the competition had caught up with Brabham, and his technology and techniques were becoming obsolete. Strong reliability and the driving talents of Hulme and Brabham helped the team achieve three first and second finishes. Hulme won the Driver's Championship that year and Brabham finished in second. The Brabham team secured another Constructor's Championship.

The Brabham BT26 was created in 1968 and intended for Formula 1 competition. Power was from a Repco 860 engine, thus the vehicle's name at the time was commonly known as the Repco Brabham. The V8 engines featured twin-cam heads and four-valves per cylinder. It was capable of producing around 400 horsepower. The engine was powerful, but very unreliable which resulted in an eighth-place finish in the Constructor's Championship. The prior two years, Brabham had won the Constructor's Championship. Two chassis were created; one for Jack Brabham and the other for Jochen Rindt. Chassis number 1 was involved in a crash so a third car was created for the final three races of the season.

The following season, Brabham replaced the Repco engines with Cosworth DFV units. Chassis number two was sold to Frank Williams who later installed a DFV engine and competed during the 1969 season with Piers Courage as the driver.

Brabham constructed a fourth car, also with a DFV powerplant. With the Ford/Cosworth DFV engines, the car's names were changed to BT26A. With the proper engines in place, the cars were finally able to prove their true potential. Jacky Ickx won the German Grand Prix in chassis number 4 and finished second in the World Championship behind the front-runner, Jacky Stewart. The Brabham team finished second in the Constructors' Championship behind Tyrrell and their Matras.

At the conclusion of the 1969 season, rules changes made the cars obsolete so the two remaining Brabham cars were sold.

For 1970, the Brabham BT33 was introduced and driven by Jack Brabham and Rolf Stommelen. Power was from Cosworth DFV power and the car rode on Goodyear tires. A total of 35 points were scored that season, earning the team a fourth-place finish. The BT33 was used in 1971 and 1972, both years the team finished in 9th place.

The BT33 was the team's first full monocoque car. The change was necessary to accommodate fuel tank regulations which went into effect for the 1970 season.
by Daniel Vaughan | Jun 2007

There were three examples of the BT33 built. The first example, BT33/1, was raced by Rolf Stommelen during the 1970 season. The car was crashed during practice for the British Grand Prix, so Mr. Stommelen piloted chassis number 3. The car was repaire....[continue reading]

Chassis number BT33/3 was used by Rolf Stommelen after BT33/1 was involved in an accident. BT33/3 had been intended for use by privateers. One of the highlights of the vehicle's career was a third place finish at the Austrian grand Prix. ....[continue reading]

The suddenly switch in camera position and the split-second shot of a car plowing head-first into the guardrails on the outside of the Gazometre hairpin would almost seem surreal. What would be truly surreal would be the way that last second glimpse ....[continue reading]

McLaren and Formula One are truly synonymous. Over the course of its history, McLaren has completed 714 races and have garnered no less than 178 victories. But while McLaren and victory in Formula One are an almost certainty, the very first would be...

By the beginning of the 1962 Formula One season Jack Brabham had left Cooper to form his own racing team. It seemed the glories days of the double World Championship were well and truly behind them. However, left in Brabhams stead would be a man very...
1970 Formula One Season1970 Season Review