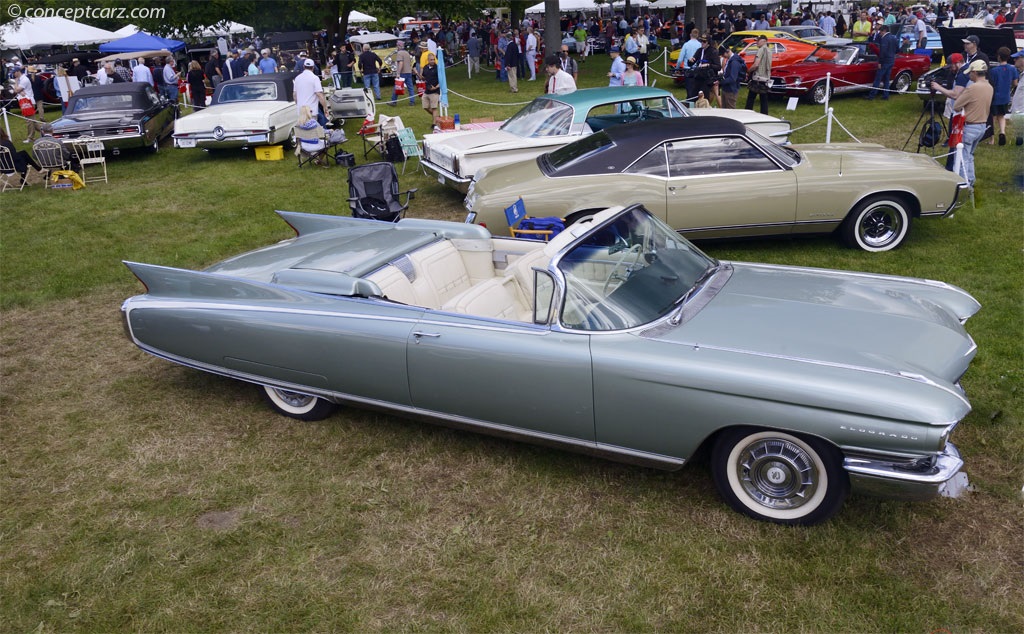 The Cadillac Eldorado Convertible was introduced in 1953 and priced at $7,750, nearly double the price of its Series 62 Convertible Coupe sibling. The Eldorado Brougham was introduced four years later intended to compete with the Lincoln Continental Mark II. The hardtop sedan had a stainless steel roof, an air suspension, power memory seats, and rear-hinged doors. The pillarless hardtop wore a design by Chuck Jordan and David Holls of Cadillac and fine-tuned by the coachbuilders in Italy. These hand-built cars came equipped with many options, including factory air conditioning, and was powered by a 345 horsepower 390 cubic-inch V8 engine backed by a Hydramatic transmission.

Many of the styling features were carried forward into 1960, albeit more conservative and restrained. The pointed front bumper guards were removed, with less chrome trim, lower tailfins with oval-shaped nacelles, a full-width grille, and front fender-mounted directional indicator lamps. Again, the Seville two-door hardtop and Biarritz convertible shared several similarities including the Eldorado lettering on the front fenders and bright bodyside trim elements that traversed the lower edge of the fender skirts.
Mechanical upgrades included finned rear drums and an X-frame construction. The X-frame construction was more rigid and resistant to twisting forces than the conventional frame (as claimed by GM), which typically had a flat floor installed on top of it. Additionally, the X-frame was claimed to offer better road isolation resulting in a quieter ride with fewer rattles and squeaks, however, it was criticized by safety experts as being unsafe in side-impact collisions.

After Chrysler introduced its 'forward look' in the mid-1950s and sparked a new trend, General Motors scrambled to lower their cars. GM full-sized cars used the tubular-center X-frame, underpinning the new C-body Cadillacs and Eldorado Brougham, from 1957 through 1964 (the Buick Riviera continued to use it through 1970). The deep floor wells allowed for a lower overall vehicle height. In efforts to strengthen the overall structure, GM strengthened the side-to-side stiffeners in the floor, and Fisher Body added extra strength to the rocker sills of the bodies.

The Eldorado Brougham
Aside from the Brougham, the most expensive Cadillac in the lineup was the 9-passenger Fleetwood Seventy-Five Limousine with a price of $9,750. It had the largest wheelbase, measuring 149.75-inches and its length was 244.8-inches, nearly twenty-inches longer than the other Cadillac models. The Brougham eclipsed the price of all 1960 Cadillacs, even the $7,400 Biarritz Convertible, with a price of $13,075. The excessive cost was due to the chassis being shipped to Italy where Pinin Farina installed the bodies. Many decades later, in the late 1980s and early 1990s, this process would be repeated with the Allante, another Pinin Farina coach-built Cadillac.

99 examples of the hand-built Eldorado Brougham were built in 1959 and 101 the following year. The Pinin Farina design featured long, low lines and finely sculpted tailfins. The windshield was one of the largest ever fitted to a production automobile.

Although the bodies were hand-built in Itlay to a design by Cadillac, sharing no sheet metal or glass with the factory-built 1960 Cadillacs, the quality was criticized as being lower than the Detroit-built Broughams of 1957 and 1958. This was hard to imagine as the level of prestige, refinement, and prices were meant to compete with Bentley and Rolls-Royce. The craftsman at Pinin Farina hand-hammered every body panel into shape and there are no seams anywhere in the bodywork, trunk lid, hood, and doors. The use of chrome trim was subdued, sophisticated, and refined, and vastly more delicate than that of the standard Cadillacs. The seamless windshield and rear glass surrounds were hand made from chrome-plated brass and individually fitted to each car.

Nearly all Eldorado Broughams were built to individual customer order, with the buyer selecting the leather or broadcloth upholstery with sheared mouton or nylon blend loop carpet. Every available Cadillac accessory was standard equipment and power was supplied by a high-performance Eldorado engine with three 2-barrel carburetors. They were the very best and most exclusive vehicle Cadillac had to offer and only 101 examples were built in 1960.
by Daniel Vaughan | Mar 2020

Wearing the signature design of Dave Holls, in an era where no design was too wild, the nineteen-foot-long Cadillac Eldorado Biarritz Convertible you see before you is a more reserved version created for 1960. Powered by a 390 cubic inch, 345 horsep....[continue reading]

The 1960 Cadillac Eldorado Brougham is a little-known, but highly significant automobile. Perhaps its most notable distinction is the fact that it is the last of the custom-bodied Cadillac's. The bodies on these cars were hand built in Italy by Pin....[continue reading]

The 200 Cadillac Brougham sedans built in 1960 and 1961 were some of the last examples of the coach built era. 101 were built in 1960 and this is # 16. The design styling was done by Chuck Jordan and Dave Holls in Michigan at the General Motors Techn....[continue reading]

Cadillac introduced the Eldorado convertible in 1953 and it was known as a status symbol around the world throughout the 1950's, 60's, and beyond. Car Life magazine selected the 1960 Cadillac as its 'Best buy in the luxury field.' The Biarritz sold....[continue reading]

The Eldorado was near the top of the Cadillac line during the early part of its existence. It was part of Cadillac from 1953 to 2002 and is the longest running American personal luxury car. The original 1953 Eldorado convertible and Eldorado Brougham....[continue reading]

Although the 1959 Cadillacs may be the most recognized, the 1960 models are certainly among the most beautiful. At the top of the lineup is the Eldorado Biarritz. With a smoother and more subdued look, it is among the most desirable Personal Luxury c....[continue reading]

General Motors introduced the new, top-of-the-line convertible to its Series 62 of luxury cars in 1953. It was called the Eldorado after the mythical South American 'Lost City of Gold.' It was joined by the Oldsmobile 98 Fiesta, the Chevrolet Corvett....[continue reading] 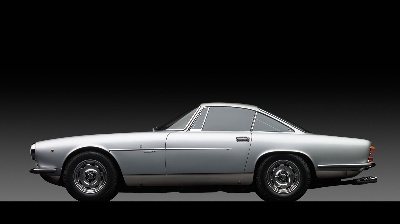