Infiniti has released the first picture of the new Infiniti G37 Convertible which will receive its global debut at the 2008 Los Angeles Auto Show in November. Sales have initially been confirmed only for the ÚS market where it will be launched early in 2009.

The Infiniti G37 Convertible is under study for launch in Europe where it would join its sister G models, the Infiniti G37 Sedan and Coupé, in Infiniti Centres which begin opening across the Continent from October.Source - Infiniti

Infiniti today unveiled the latest expression of its 'Inspired Performance,' the all-new 2009 Infiniti G Convertible, at the 2008 Los Angeles Auto Show. The first-ever Infiniti G Convertible builds upon the performance legacy of the Infiniti G line, with the liberation only a convertible with the top down can provide. It is scheduled to go on sale at Infiniti dealers in North America in the spring of 2009, followed later in other Infiniti markets around the world.

'Designed to rejuvenate the spirit, the G Convertible adds an open-air soundtrack to the G's legendary driving exhilaration,' said Brian Carolin, senior vice president, Sales and Marketing, speaking before automotive media at the vehicle's world debut. 'This new G has dual beauty – it looks as good with the top up or down – along with a beautiful, leather-appointed interior that is meant to be experienced wide-open.' 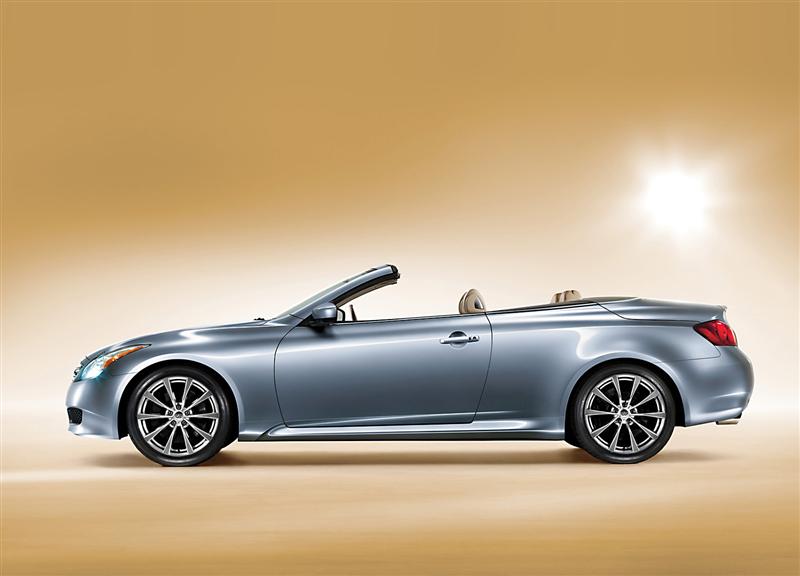 The new G Convertible offers a three-piece folding steel top and a special convertible-focused interior, which features a unique Bose® Open Air Sound System that dynamically changes equalization based on outside noise, vehicle speed, and top position, and an adaptive climate control system that adjusts fan speed in accordance to top position and vehicle speed.

Every 2009 G Convertible comes equipped with an advanced 3.7-liter V6 rated at 325 horsepower. The engine is backed by a choice of an electronically controlled 7-speed automatic transmission with available magnesium paddle shifters or a responsive close-ratio 6-speed manual transmission. (posted on conceptcarz.com)

The G Convertible is offered in two models: the G37 Convertible and the G37S Convertible Sport 6MT, which adds sport-tuned steering and larger sport brakes, along with 19-inch aluminum-alloy wheels and W-rated performance tires.