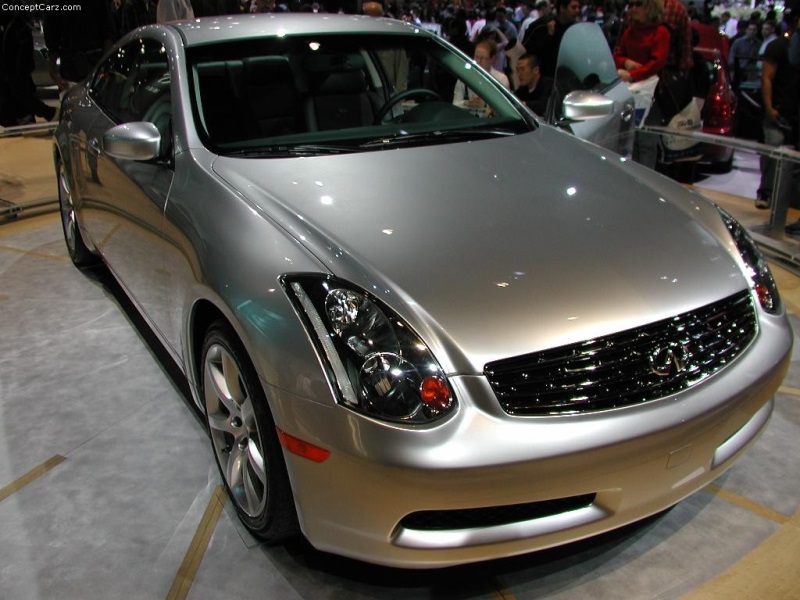 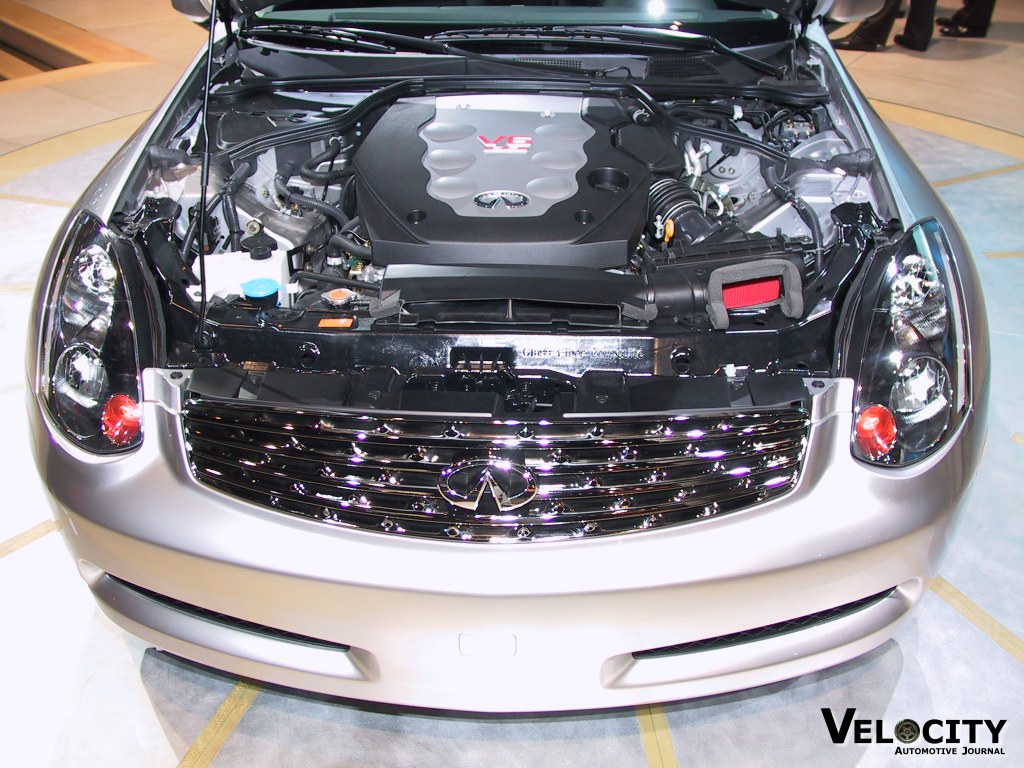 Recently named 2003 Motor Trend Car of the Year, the G35 Sport Sedan expresses Infiniti's bold direction of combining leading-edge design and technology, driver-oriented performance and a high level of luxury. Running changes for the 2003 G35 include the addition of xenon headlights to the Leather Luxury model, the addition of the sunroof to the Premium Package, available satellite radio, with a choice of XM or Sirius service, and an available new close-ratio 6-speed manual transmission. (posted on conceptcarz.com) 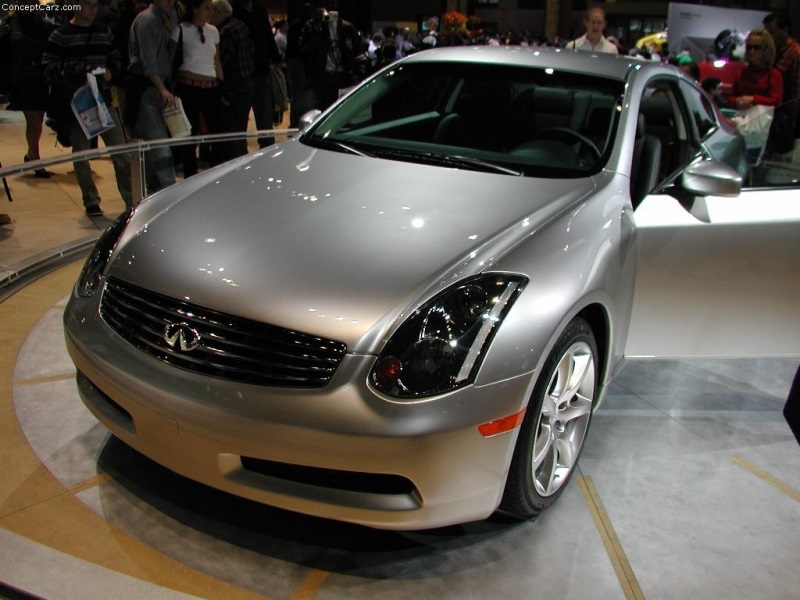 The rear-wheel drive G35 is powered by an advanced, 260-horsepower V6 engine mated to a choice of 5-speed automatic transmission with manual shift mode or 6-speed manual transmission. (posted on conceptcarz.com) The G35's performance is enhanced by a new 4-wheel independent suspension with lightweight aluminum components and highly aerodynamic styling – including a coefficient of drag of just 0.27 and zero degrees of front lift. The G35 is positioned to compete against current popular sport sedans such as the BMW 3-series, Lexus IS300 and Audi A4 3.0. 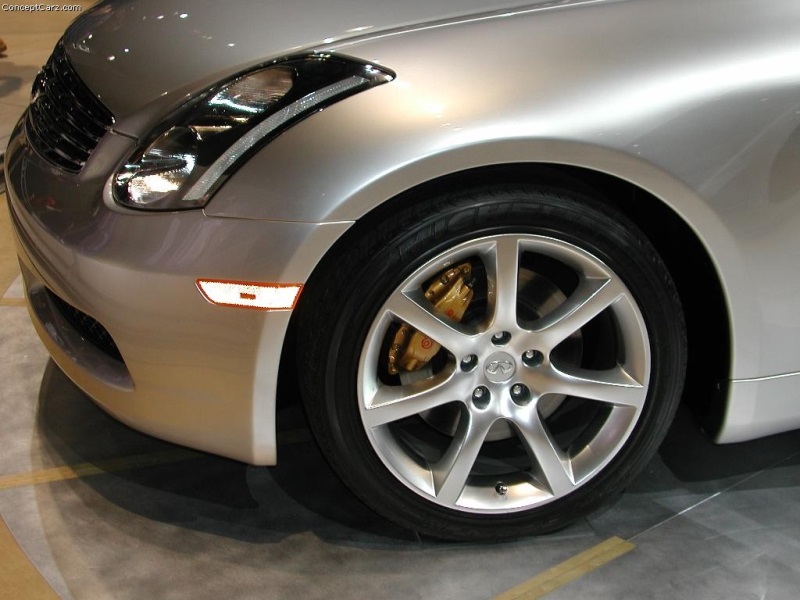 'The 2003 G35 has become a major contender against some of the top sport sedans in the world,' said Mark McNabb, vice president and general manager, Infiniti Division. 'Its combination of power, handling and advanced technology, along with its highly competitive pricing, gives G35 a tremendous advantage against some of the traditional favorites in class.' 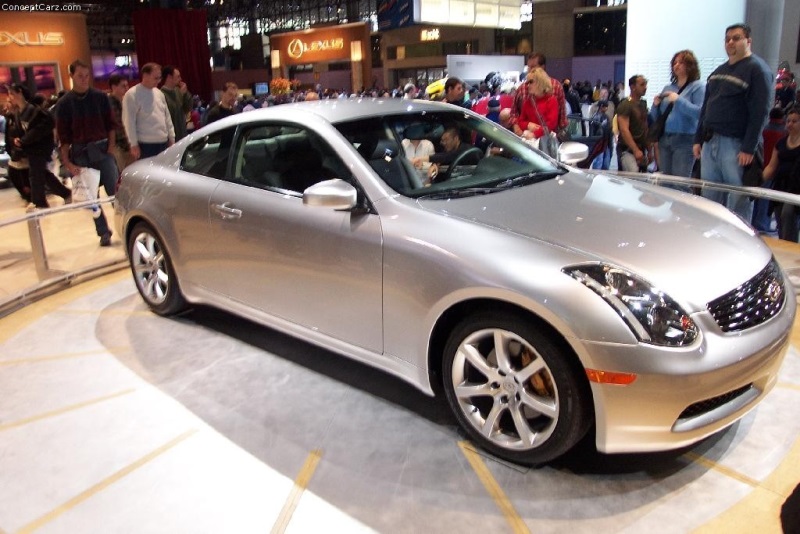 The boldly styled G35 maintains the platform specifically designed for mounting a V6 engine behind the front axle in the so-called 'front mid-ship' position. The positioning of the engine is a key to the G35's high level of driving performance, providing an optimized 52:48 percent front-to-rear-weight balance and also allowing the designers to push the wheels out to the car's corners for better interior space utilization.

The location of the G35's compact V6 behind the front axle allows the use of a low, aggressive hoodline, which flows into the sharply angled windshield and contributes to the G35's sporty, powerful silhouette. The front fascia features an Infiniti-style horizontal crosspiece grille, low-postured front bumper and vertically stacked headlight assembly with integrated fog lights and turn signals.

The smooth visual line flowing from the front fenders through the side profile cuts off at the rear, expressing a balance between sportiness and function. The C-pillar and rear fenders accentuate the spaciousness of the cabin, while the large greenhouse provides good visibility from all seating positions. The rear fascia is highlighted by large rear combination lamps with LED taillights. The LED lights provide maintenance-free operation and bright visual recognition for following drivers during braking.

The FM platform design, derived from racing technology, also places a strong emphasis on aerodynamics, especially on the control of airflow under the body. The extensive use of diffusers and deflectors helps the G35 achieve zero degrees of front lift (0.0 clf), reducing drag and noise and contributing to vehicle stability. With the optional rear spoiler, zero degrees of rear lift is also achieved. The G35 has an exceptional coefficient of drag measurement of just 0.27 (0.26 with optional rear spoiler) for reduced wind noise and optimized fuel economy. The 2003 G35 also utilizes aluminum for the hood for reduced weight and further enhancement of fuel economy.

Attention to body and structural stiffness includes adoption of a dual bulkhead engine compartment construction that functions as a body stabilizer for damping vibrations (in addition to isolating noise and heat). The G35's roof panel and body side panels are laser-welded to enhance body rigidity and to enable the entire body to damp vibrations. The increased stiffness and rigidity improve driving stability and ride comfort while reducing noise, vibration and harshness (NVH). 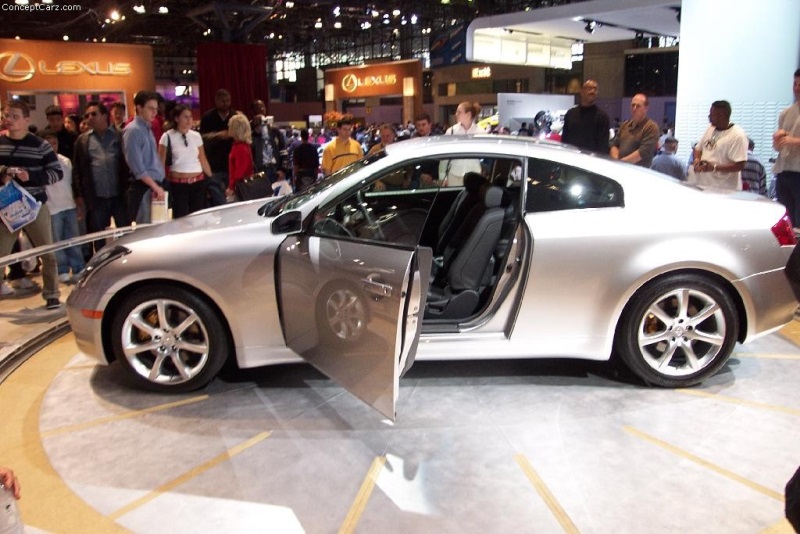 Dynamic Performance and Innovative Technology Systems
A 260-horsepower 3.5-liter DOHC 24-valve V6 with 260 lb-ft of torque, derived from the VQ engine series, which has been recognized as one of the 'Ten Best Engines' by Ward's Auto World magazine for nine consecutive years, comes standard on every G35, along with an advanced 5-speed electronically controlled automatic transmission with manual shift mode or close-ratio 6-speed manual transmission. (posted on conceptcarz.com)

All G35s come with Vehicle Dynamic Control (VDC), enhancing vehicle stability under a variety of driving conditions – similar to that offered in the 2003 Infiniti Q45 and M45.

A high level of sporty handling is provided by an impressive 4-wheel independent multi-link suspension. The G35's front suspension design minimizes alignment changes through use of two separate lower links and a long upper link. The rear design separates the shock absorbers and springs, locating the shock absorber inline with the wheel center to help reduce suspension friction and reduce the wind-up motion of the axle on acceleration. Both front and rear suspension designs utilize aluminum components to reduce unsprung weight and incorporate 'ripple control' shock absorbers with damping control lips for suppressing high-frequency, micro-amplitude vibrations. As a result, tiny ripples in the road surface are absorbed to deliver a smooth, comfortable ride.

Special attention to comfort required a rethinking of the seat design from 'one seat fits all' to unique front driver and passenger's seats. The driver's seat uses a special center mound shape with high damping urethane foam and special spring design to support the driver during sporty driving. The front passenger's seat has a flatter-shaped lower cushion and the seat is shaped to provide a relaxed posture, even when folding or stretching his or her legs. In the rear, the G35 offers a choice of wide bucket-shaped seats or optional rear reclining seats, both with ample knee room and a pass-through armrest.

The interior's T-shaped structure, with its flowing design theme from the center instrument cluster to the floor console, emphasizes ergonomics and convenient storage. There are numerous pockets, holders and straps located throughout for easy access and use.

The G35's trunk space is enhanced by the use of items such as a four-link hinge design, thin LED rear combination lights and underfloor storage compartments near the spare tire.

The FM platform also provides a number of innovative safety performance features, including a mechanism for releasing the engine downward (rather than straight back toward the passenger compartment) in a collision, brake pedal construction that helps prevent rearward pedal movement and a breakaway propeller shaft construction.

G35 Availability and Equipment
The 2003 Infiniti G35 is available in three models – G35 Sedan, G35 Sedan Leather and G35 Sedan Sport 6MT. All models come equipped with a 260-horsepower V6 with choice of a 5-speed automatic transmission with manual shift mode or close-ratio 6-speed manual. A number of optional packages allow the buyer to custom-equip the G35 to further reflect his or her exact driving style and tastes.

The 2003 Infiniti G35 Sport Coupe, 2003 Motor Trend Car of the Year, went on sale November 2002 at 162 Infiniti dealers nationwide. It joins the class-leading four-door G35 Sport Sedan as a potent one-two punch in the growing mid-size sports performance segment. Created with racing-inspired technology, both G35 models utilize the same rear-wheel drive, driver-oriented platform, with the new G35 Sport Coupe turning up the performance levels even higher and draping it under a sensuous two-door body.

'The G35 Sport Coupe is a car that moves Infiniti forward into new territory,' said Mark McNabb, vice president and general manager, Infiniti Division. 'It has the same combination of high performance, rear-wheel drive and luxury amenities of our flagship Q45 and G35 sedans and adds that extra measure of emotion and excitement that comes with sports car styling and packaging.'

Racing-Inspired Foundation
The G35 Sport Coupe features the innovative FM (for front mid-ship) platform, which positions the engine behind the front axle. This results in an optimized front-to-rear weight balance of 53:47, which factors in weight transfer during key handling maneuvers, such as entering and exiting corners. The FM platform also positions its large diameter wheels and tires out near the corners of the vehicle, providing an extra measure of handling stability. 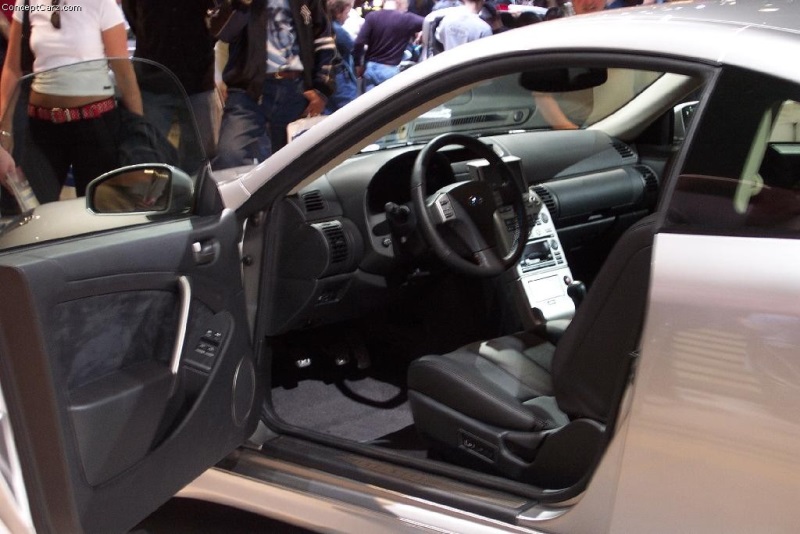 'Kazutoshi Mizuno, the G35 Sport Coupe's Chief Vehicle Engineer, began development of the basic platform concept in 1995, after heading Nissan's LeMans and Group C racing programs,' said McNabb. 'This combination of racing experience and extensive development work has created an exceptionally refined package right out of the box for both the G35 sedan and coupe.'

'The G35 Sport Coupe is pure Infiniti in terms of its clean, progressive styling,' said McNabb. 'We also believe it's one of the best looking vehicles on the road – sport coupe, sports car, any category.'

The 4-passenger interior of the G35 Sport Coupe is equally attractive, combining a driver-oriented cockpit with an Infiniti level of luxury and design detail. The standard sport-contoured front bucket seats are 10-way (6-way power) adjustable for the driver and 4-way (2-way power) adjustable for the passenger. The seats offer side panel control switches and are available with ultra-soft leather, manufactured exclusively for Infiniti G35. 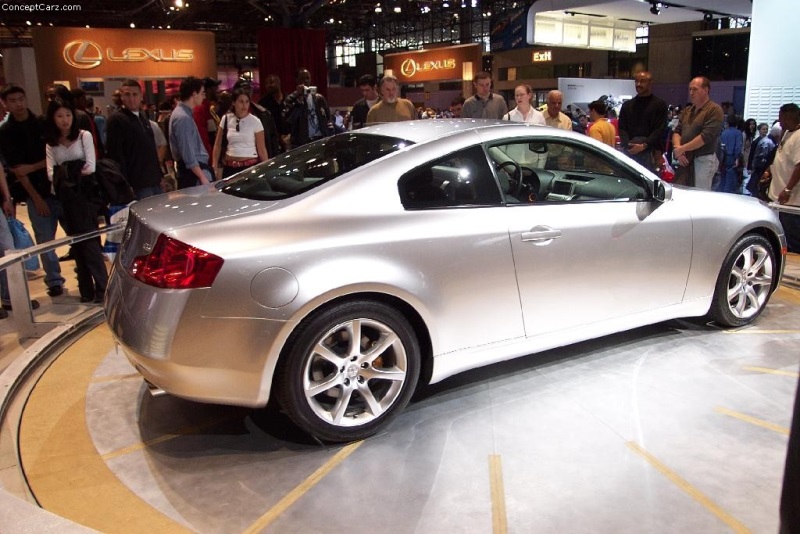 Like the G35 Sport Sedan, the G35 Sport Coupe's FM platform is designed to help protect occupants from strong impacts and large vehicle body deformation in a collision by efficiently absorbing crash energy. Front-end collisions include full frontal impacts, in which a crushable body construction is needed to reduce the deceleration g-force of the cabin.

In a high-speed frontal collision, for example, the crushable zone crumples while the engine moves as if to drop under the floor. This has the effect of expanding the crushable zone, thereby reducing deceleration g-force and simultaneously helping minimize cabin deformation, especially in the leg area.

'The G35 Sport Sedan has experienced outstanding reviews and strong sales, worthy of its segment leading performance, packaging and style,' said McNabb. 'The G35 Sport Coupe builds on that momentum, powering Infiniti to the same leadership position in the sport coupe class.'Source - Infiniti 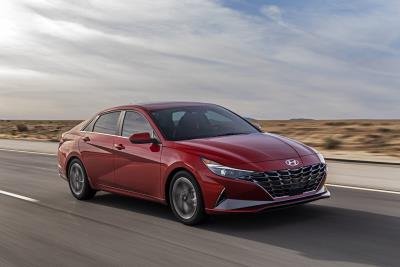