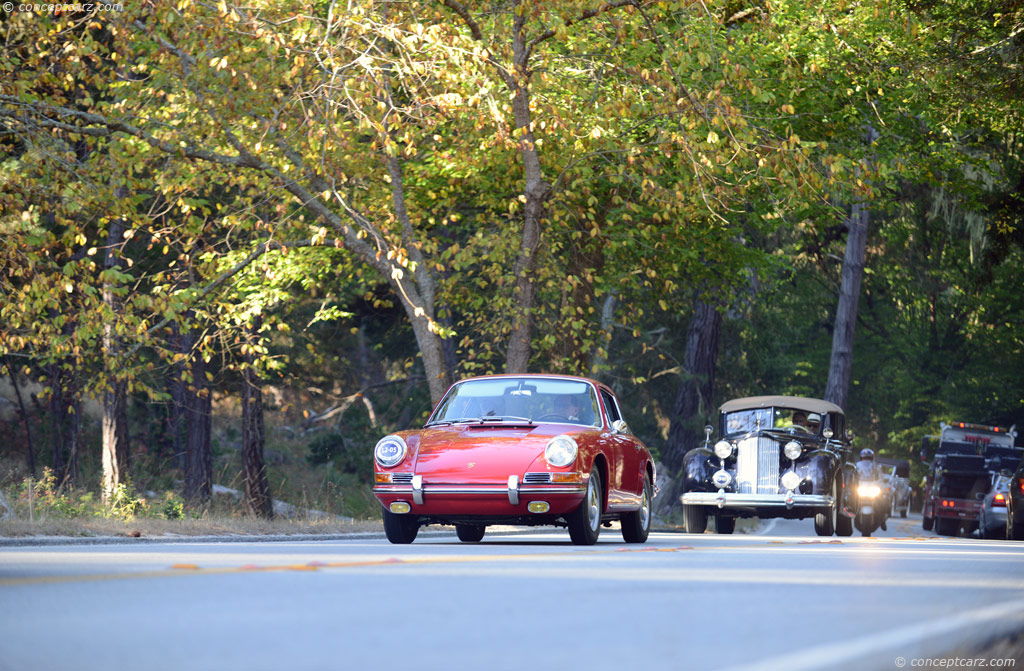 Having reached the development limits of the 356 Series in the mid-1950s, particularly in regards to its air-cooled four-cylinder engine which effectively limited the company's racing aspirations to class, but not overall victories, Porsche began work on the eventual successor, internally code-named 'Technical Project 7' or simply 'T7.' Work began with basic conceptual sketches by Ferdinand A. 'Butzi' Porsche (Dr. Ferry Porsche's eldest son) and chief body engineer Erwin Komenda in 1959 predicting a larger, more powerful, and comfortable successor to the 356. Ferdinand Porsche developed the new body and chassis, his cousin Ferdinand Piech designed, tested, and developed the new air-cooled, 'flat-six' engine, derived from the marque's Type 804 Grand Prix racing programme. The flat-six 1991cc engine was allied to four- or five-speed manual transmissions. The goal was achieve the performance levels of the 356 Carrera 2, while matching the refinement of the 356 'Normal.' The design paid stylistic homage to its predecessor and rested on a lightly longer wheelbase. It had a steel monocoque bodyshell and weighed just 1,080kg. Porsche's new Weissach test facility was used in November of 1962 to put the car through its paces, thoroughly testing the car before it made its debut the following September at the Frankfurt Auto Show. Initially called the '901', the name was later changed after objections were raised by French automaker Peugeot, claiming that they held the rights to three-digit numerical car names with zeros in the middle. Production of the new 911 model began in September of 1964.
The 911 engine initially offered 130 horsepower at 6,100 rpm, making them capable of over 130 mph.
Early advertisement of the new car declared: 'Perhaps once in a generation the opportunity arises to create an entirely new car. To start with a clean sheet of paper. To apply insights gained in seventeen years of testing, racing and refining what was already the most advanced car of its time. To design and build – almost without compromise – the ultimate car for getting from here to there in the quickest, safest, most enjoyable manner possible. Result: The new Porsche.'

Over the five decades that followed, the Porsche 911 has become successful on the road and track. In keeping with well-established Porsche tradition, the 911 was relentlessly developed and perfected, as with the prior 356, and quickly enjoyed leaps in ability and specification. Early competition use focused on rallying, including the 1965 edition of the Monte Carlo Rally, where a 911 was piloted by co-drivers Peter Falk and Herbert Linge to a fifth place overall. 'Quick' Vic Elford co-drove with David Stone to victory at the Monte Carlo Rally in a 911 in 1968. Swedish rally drivers Björn Waldegård and Lars Helmer followed up with consecutive wins at the wheel of a 911 for 1969 and 1970, completing a stunning 911 'hat trick' at Monte Carlo. The Porsche 911 also took three consecutive European Rally Championships during 1966 (Günter 'Bobby' Klass G3), 1967 (Sobieslaw Zasada G1/Elford G3), and 1968 (Pauli Toivonen). By the early 1970s, Porsche had switched its focus from prototypes to production-based GT racing, where the 911 became a dominant car in various competitive arenas. Outright Monte Carlo wins were achieved in 1968, 1969, 1970 and 1978, and the 911 further distinguished itself on the 1973 Circuit of Ireland, 1974 Manx International, 1980 Tour de Corse and 1984 / 1986 Paris-Dakar rallies. In the mid-1970s, normally aspirated 911 Carrera RSRs won major world championship sports car races such as Targa Florio, Daytona, Sebring and Nürburgring, even against prototypes. The 911-derived 935 turbo also won the coveted 24 Hours of Le Mans in 1979.

Many of the lessons learned on the racing track were implemented into the road-going versions, helping to form the world's most successful sprotscar in terms of competition glories and cultural status, over eight generations. The similarities of the current 992-series and the first 901-series include the tail-mounted flat-six engines, all-round independent suspension, four-wheel disc brakes and 2+2-seater cabins.
by Daniel Vaughan | Feb 2020

1965 was considered the last year of the 356 and first year of the 911, although some were made in 1964. This vehicle was displayed in Heritage and Historical display at the 2008 Porsche Parade commemorating 60 year anniversary of Porsches. ....[continue reading]

Sold new on May 18th of 1965, this signal red/black 911 was delivered by Brumos Porsche in Jacksonville to Dr. Percy Reed of Mobile, Alabama. He bought the car and enjoyed it for one year, then traded it back to Brumos and another Jacksonville doctor....[continue reading]

This early 911 has a strong Jacksonville connection, it was delivered to Brumos in the spring of 1965 and was the 508th Porsche 911 built. If it was not the first 1965 delivered to Brumos, it was one of the first. It was a street car (demo) for Peter....[continue reading]

This original 1965 Porsche 911 was built on June 9th of 1965 and optioned with a Bali Blue/Black interior with Pepita inserts, Webasto heater, tinted glass, Blaupunkt 'Frankfurt' AM/FM radio, loud speaker, and antenna. It was originally shipped to We....[continue reading]

Immediately after the first Porsche 911 went on sale in September 1964, the 911 established itself as an icon of the decade. Seven generations of Porsche 911s later, the little sports car can still be found at the top of most 'favorite sports car' li....[continue reading]

The Porsche 911 production series has remained in production for over half-a-century. The seventh generation of the 911 remains as coveted as it ever was, showcasing the evolution of a design that began over 50 years ago. ....[continue reading]

The Porsche 911 is one of the longest running and distinctive sports car ever made. The earliest examples have become exceeding rare with some of the most sought after and rarest examples being the 82 901-badged examples that were produced before leg....[continue reading]

This 1965 Porsche 911 was ordered with a Golde electric retracting sunroof, Option number 9474. It is believed that no more than 42 coupes from that model year were so equipped. A unique feature of this early sunroof option was its drainage system, v....[continue reading]

This numbers-matching Porsche 911 was completed on October 29th of 1965 and left the factory finished in Aga Blue over a Beige leatherette interior. The interior has a wood veneer dashboard insert and wood-rimmed steering wheel with 'Butterfly' horn ....[continue reading]

The Porsche highlights for a weekend full of highlights Atlanta, Georgia. For the Porsche Rennsport Reunion V taking place at Mazda Raceway Laguna Seca this weekend, both the men and the machines they drove are expected to outdraw one...
© 1998-2021. All rights reserved. The material may not be published, broadcast, rewritten, or redistributed.