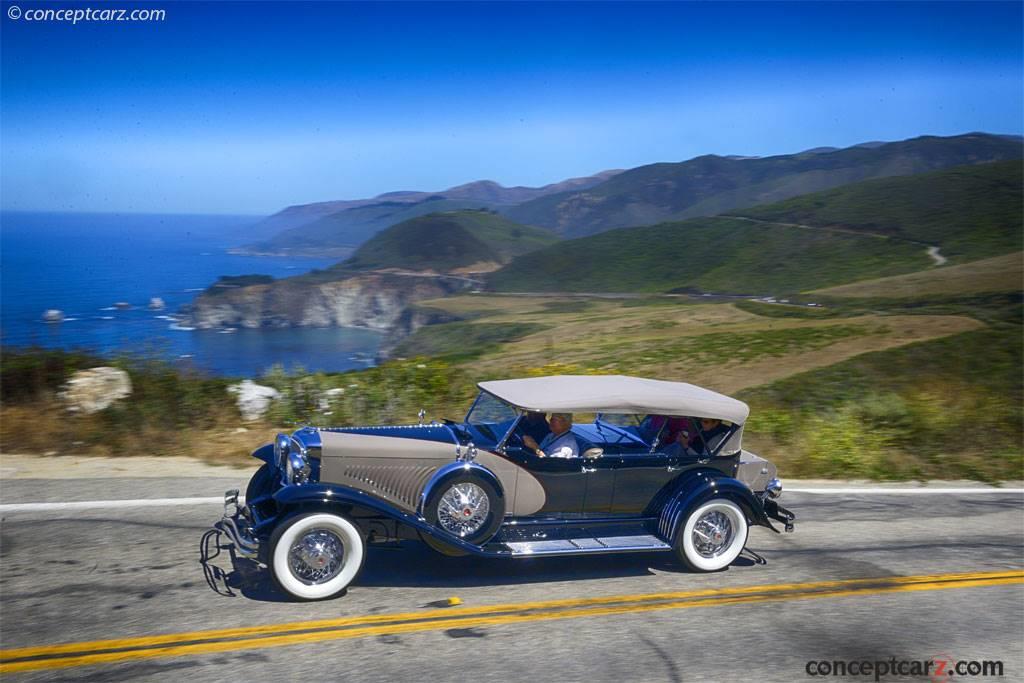 On October 26th of 1926, E.L. Cord, the owner of Auburn Automobile (along with other transportation firms) purchased the Duesenberg Motor Corporation. The goal was produce a car that could rival the luxury, size, and power of the top European brands. After the company takeover, it was renamed 'Duesenberg, Inc.' The Duesenberg Company had been founded in 1913 in Saint Paul, Minnesota by brothers August and Frederick Duesenberg. In 1916, the company moved to Elizabeth, New Jersey, to manufacture engines for World War I. In 1919, they moved to Indianapolis, Indiana.

E.L. Cord had been impressed with the brothers' talent and engineering skills. Fred continued on in the new organization, now with the title of vice president in charge of engineering and experimental work. Augie would have no formal connection with Duesenberg, Inc. until later.

The Duesenberg Model J made its debut on December 1st oat the New York Car Show of 1928. At the time of its introduction, only one example had been made (J-101), a sweep-panel, dual-cowl phaeton wearing coachwork by LeBaron, and finished in black and silver. By the time the Great Depression hit in October of 1929, around 200 examples had been built. An additional 100 orders were filled in 1930.

Powering the Model J was a straight-eight engine based on the company's racing engines of the 1920s. They were designed by Duesenberg and manufactured by Lycoming, another one of Cord's companies. The naturally aspirated straight eight offered 265 horsepower with the help of dual overhead camshafts and four valves per cylinder. The chassis had a cost of $8,500 and rose to $9,500 after 1932. A completed example could cost between $13,000 and $25,000.

The Model J was available in two versions of chassis including a long 153.54 inches and a shorter one measuring 141.73 inches. Two Model SSJs rested on a shortened 125 inches and a couple of cars were given 160 inch wheelbase platforms.

Most of the design remained the same until the factory closed in 1937. Changes included the four-speed gearbox being replaced with an unsynchronized three-speed gearbox. Duesenberg switched to a fully synchronized gearbox in the mid-1930s.
by Daniel Vaughan | Aug 2019

The Duesenberg Automobile %26 Motors Company, Inc was founded and operated by Fred and August brothers who began their company in 1913. From the start their company has been a US based luxury automobile company with a standard to build the very best hand-built vehicles during the time period. Duesenberg vehicles lived up to this standard until 1937 when the company closed. Created to build sports....
Continue Reading >>

The Duesenberg Model J was produced in Indianapolis from 1929 until 1937. It was powered by a 420 cubic inch double overhead-cam engine, which produced 265 horsepower normally and 320 horsepower with the addition of the centrifugal supercharger. It w....[continue reading]

The Duesenberg Motor Company was founded in Des Moines, Iowa, in 1913. They relocated to a larger facility in New Jersey in 1917 where the Duesenberg brothers (Fred and August) built a special 16-cylinder engine that powered a Land Speed Record car t....[continue reading]

This car was one of several Duesenbergs sold in France. The original owner was the wealthy American, Mrs. Honore Palmer who had residences in both Paris and Chicago. She kept the car in Paris until 1934 when she had it shipped to the United States.....[continue reading]

This 1930 Duesenberg Model J LWB Dual Cowl Phaeton by LeBaron is chassis number 2336 and is powered by engine J487. It was delivered new as J320/2336 to a Mr. J. Clarke Dean of Chicago, Illinois in 1930. This is the only long-wheelbase version of the....[continue reading]

This 1930 Duesenberg Model J wears 7-passenger Limousine coachwork created by the Willoughby Body Company of Utica, New York. It has been certified by the Auburn-Cord-Duesenberg Club as a Category 1 Original. It has chassis number 2402 and original b....[continue reading]

This Duesenberg Model J was bodied by the Parisian coachbuilders Hibbard & Darrin as an Imperial Cabriolet. It was built using their patented all-aluminum Silentlyte construction method. The car was on display at the 1930 Paris Auto Salon when it was....[continue reading]

New York coachbuilder Rollston Co. bodied automobiles beginning in 1921. Founded by Harry Loenschein and associates, Rollston was best known for its almost staid and conservative 'top hat' formal limousines. At the opposite end of the spectrum, howev....[continue reading]

The Indianapolis based Duesenberg Company produced the Model J from 1929 until 1937. Powered by a 420 cubic-inch double overhead-cam engine, it offered 265 horsepower normally and 320 horsepower with the addition of the centrifugal supercharger. It w....[continue reading]

This 1930 Duesenberg Model J Convertible Berline with coachwork by LeBaron was offered for sale at the 2007 Christie's Auction of 'Exceptional Motor Cars at the Monterey Jet Center.' It is finished in maroon with black fenders and maroon leather, and....[continue reading]

The Short Wheelbase Duesenberg measured 142.5 inches while the long version was nearly 13 feet. The engine tasked with carrying these large and stately bodies was the Lycoming eight 420 cubi-inch dual overhead camshaft engine with four valves per cyl....[continue reading]

Total 1930 Duesenberg Model J production: 0
© 1998-2020. All rights reserved. The material may not be published, broadcast, rewritten, or redistributed.