During the weekdays, when commuting is its primary task, the 2001 Chevrolet Borrego concept vehicle is a sporty, surefooted two-seater with a small cargo bed. But for nightlife and weekend adventures when the friends are along, the vehicle's reconfigurable mid-gate slides outward to create two new seats in the rear.

It's a segment-busting innovation that shows GM is serious about giving customers the most vehicle for their money. This sort of versatility was first seen in the upcoming Chevy Avalanche, which has a unique Convert-a-Cab™ system that allows the truck to adapt quickly to customer requirements. In its standard configuration, the Avalanche offers a roomy, comfortable five-passenger cab along with a cargo box measuring 5' 3' long. The Convert-a-Cabä system allows one person to reconfigure the cargo area in seconds without tools to create a 4' x 8' cargo area to transport large items.

The Borrego's reconfigurable mid-gate is held in place with solenoid pins that can be operated by remote control. The rear window is retracted into the mid-gate, which can then slide rearward. A roof panel that is stored under the cargo bed is then installed to cover these two new seats, and the rear window can be raised again, if desired. Self-inflating seals keep the compartment watertight regardless of whether it's set up for two passengers or four.

These reconfigurations are blurring traditional distinctions in sport utility vehicles and pickup trucks in a way that will appeal to active customers with varied needs. 'These are GM innovations that the other guys can't match,' said Clay Dean, brand character chief designer for Chevy Truck.
Source - Chevrolet

The segment-busting Borrego concept from Chevrolet combines the road-taming agility of a rally car with the traditional rock-hard toughness of a Chevy. The all-wheel drive vehicle can commute very comfortably during the weekdays and then let off a little steam on the weekends.

'The Borrego has the agility of a rally car and the influence of Baja racers,' said Frank Saucedo, 38, director of GM's Los Angeles design studio where the concept was conceived. The vehicle's sporty, swept-back look and athletic stance take their inspiration from international rally cars and pre-runner trucks -- spare, customized pickups that are part of the California scene. 'We see it here every day, a younger buyer moving out of a sport coupe and getting into a tricked-up little truck – or in this case a crossover vehicle,' Saucedo §äid.

Últra-Functional Interior
The interior continues Chevy's traditional dual-cockpit design, and gives a sense of protection for rough riding. 'It looks like you could rattle around and not get banged up,' said Rob McCann, 38, chief designer on the project in the L.A. studio. Hand-holds and gel padding add to this sense of security. Rugged analog gauges finish the rally appearance.

Borrego's sturdy roll bar not only harkens to durable pre-runners and rally cars, it also accommodates an innovative reconfigurable mid-gate at the rear of the passenger cab that allows seating for two more passengers. To add two passengers, the rear window is retracted, the mid-gate slides rearward, and then the full roof, which is stored under the bed of the pickup truck, is snapped into place. The window can then be raised again. Self-inflating seals keep the compartment watertight regardless of its configuration.

With the seating expanded, the cargo bed changes from 6 feet to about 3 feet to provide more room for passengers. This sort of versatility was first seen on the upcoming Chevy Avalanche, which has a unique Convert-a-Cabä system that allows the truck to quickly adapt to customer requirements. In its standard configuration, the Avalanche offers a roomy, comfortable five-passenger cab along with a cargo box measuring 5' 3' long. The Convert-a-Cabä system allows one person to reconfigure the cargo area in seconds without tools to create a 4' x 8' cargo area to transport large items.

'Functionally, the Borrego is a very flexible vehicle,' said McCann, whose workspace is decorated with action photos and sketches of Baja racers, pre-trucks and rally cars.

Function, With Emphasis on the FÚN
For outdoor adventure the Chevy Borrego features a portable GPS system to aid navigation in or out of the truck and OnStar keeps driver and passengers connected to civilization no matter where they are.

The Borrego also carries an air compressor and a pressurized water tank. The air hose can be used to blow dirt out of the vehicle's interior, to inflate outdoor equipment, or merely to pressurize the water tank so that after a hard day on the trail, the truck can provide everyone with a quick shower.

The Borrego's sturdy all-wheel-drive powertrain is based on Subaru's longitudinal all-wheel-drive system that has allowed Su toubar take the world rally circuit by storm and win critical acclaim. As a 20 percent shareholder in Fuji Heavy Industries, which makes the Subaru, General Motors is leveraging its international network of automaker alliances to expand the range of this and other concepts that will debut during the 2001 auto show season.

Subaru's horizontally opposed 4-cylinder engine keeps the vehicle's center of gravity low for improved handling and a better sight line down the hood. It's also turbocharged to keep the driver riveted in his or her seat. The transmission is a five-speed manual for sporty performance and a hands-on driving experience.

Aimed squarely at a 20-something consumer who wants a uniquely functional vehicle, the Chevy Borrego might be a first car for active people, or a trade-up for those who didn't find enough excitement in an import coupe or SÚV. This customer might also have been a Camaro driver, but needs more space for hauling sporting gear or friends.

The emphasis here is on fun and sporty performance. The Borrego isn't for hauling a sheet of drywall, but will take the customer a lot further into the brush than most of the sport utility vehicles on the road today.Source - Chevrolet

Micah Diaz of Corona, California, crowned the newest Hoonigan ambassador as FIAT brand and Hoonigan teamed up for a second straight year to celebrate the culture of motorsport This years grand priz... 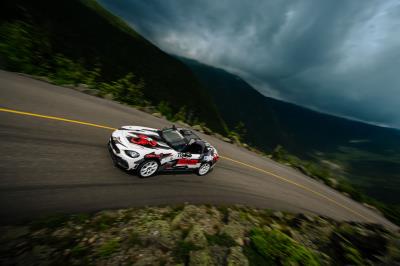 After the success of crowning the next great female racer last summer, the FIAT brand and Hoonigan are teaming up for a second straight year to support auto racing and to find the next great driverH...