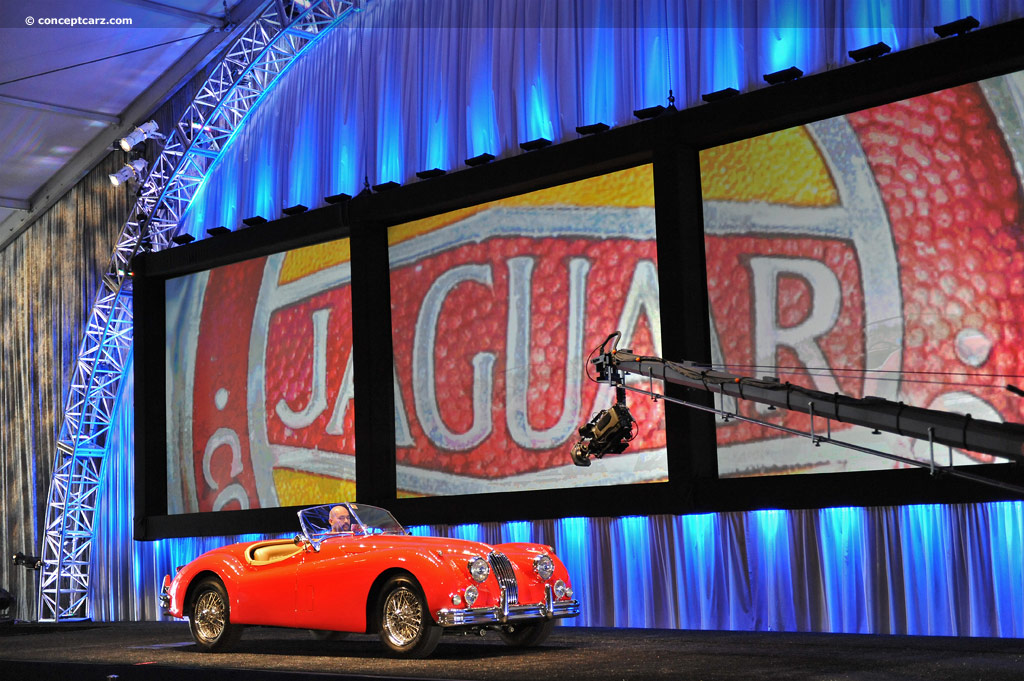 The Jaguar XK140 sports car was produced from 1954 through 1957 and served as the successor to the XK120. It was broadly similar to its predecessor, yet more refined employing with the repositioning of the engine 3-inches further forward and the adoption of rack-and-pinion steering as used on the racing C-Type. The brakes and suspension were mostly unchanged, though with stiffer torsion bars at the front and telescopic shock absorbers replacing the previous lever-type at the back. Like the XK120, the XK140 was built in three body styles that included a coupe, drophead coupe, and roadster. The coupe and drophead coupe received an increase in cabin space and occasional rear seats, gained from repositioning the engine and firewall. The sleek body shape of the XK 120 was retained, with exterior changes and distinguishable features included the revised radiator grille, larger bumpers, and rear lights incorporating flashing indicators. A longitudinal chrome strip was added to the hood, accentuating the car's sweeping design.

The 3.4-liter, twin-cam six remained, albeit with 190 horsepower in standard guise thanks to higher-lift camshafts and revised porting. Steel bearing caps replaced the previous cast-iron type, enhancing the engine's reliability. A close-ratio gearbox sent power to the rear wheels, while Laycock-de Normanville overdrive became an option for the first time.

XK140 models with the Special Equipment (SE - the USA-specification were known as the MC) package - for an additional $295 - were fitted with wire wheels, dual exhausts, a lightened flywheel, dressed up trunk fittings, and Lucas fog lamps, and could be ordered with an engine developing 210 horsepower courtesy of the 'C-Type' cylinder head.

The Jaguar XK140 had a timeless and elegant exterior design coupled with a roomier interior. This example was built at the Coventry, England, Jaguar plant near the close of 1954 and sent to US distributor Hoffman Motor Car Co. on December 29th of 195....[continue reading]

This 1954 Jaguar XK140 Roadster was offered for sale at the 2007 Christies auction of 'Exceptional Motor Cars at the Monterey Jet Center.' It is black with red leather interior and powered by a six-cylinder engine with twin overhead camshafts and a ....[continue reading]