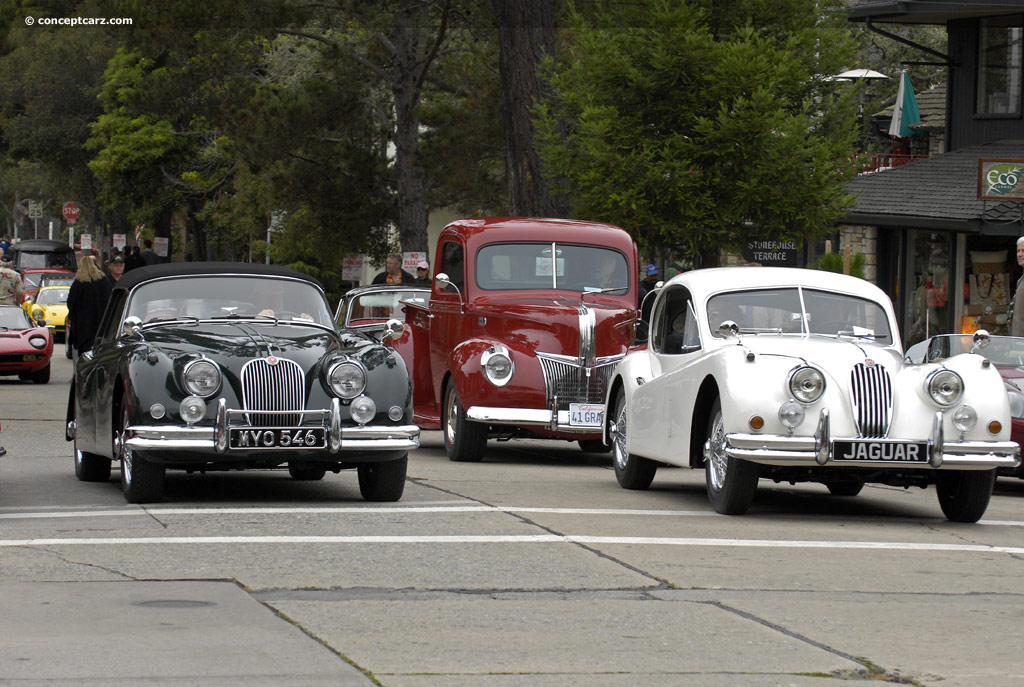 The Jaguar XK140 was launched in 1954 and was broadly similar to its XK120 predecessor, though more refined and sophisticated. The major engineering changes were confined to the adoption of rack-and-pinion steering as used on the racing C-Type, and repositioning the engine three-inches further forward. The brakes and suspension remained mostly unchanged, though with telescopic shock absorbers replacing the previous lever-type at the rear and stiffer torsion bars at the front. Like its forbearer, the Xk140 was constructed in three body styles consisting of a roadster, coupe, and drophead coupe, the latter two having increased cabin space and occasional rear seats. Exterior changes included a revised radiator grille, larger bumpers, and rear lights incorporating flashing indicators.

The engine bay continued to house the tried-and-true 3.4-liter, twin-cam six, which now delivered 190 horsepower in standard trim thanks to revised porting and higher-lift camshaft. Steel bearing caps replaced the previous cast-iron type, ensuring reliability. The increased performance was handled by a close-ratio gearbox while Laycock-de Normanville overdrive became an option for the first time.

Jaguar XK140 models with the Special Equipment (SE) package came with wire wheels and Lucas fog lamps and could be optioned with a 210 horsepower engine with 'C'-type cylinder head. The XK140 was capable of top speeds in excess of 120 mph. A USA-specification XK140 MC (as the 'C'-type head-equipped SE version was known there) was tested by Road & Track magazine with a zero-to-sixty mph time of 8.4 seconds and a top speed of 121.1 mph.

The Jaguar XK120 had made its debut in 1948 and produced through 1954 with approximately 12,000 examples made. It was at the forefront of sports car manufacturing, with graceful lines and race-proven performance capabilities. The arrival of the XK140 built upon its predecessors sound original design, bringing with it a comprehensive list of improvements designed to overcome its predecessor's few shortcomings while maintaining its appeal, especially in the all-important U.S. export market. It retained the basic 102-inch wheelbase length of its predecessor, ergonomics were significantly improved, and race-proven mechanical enhancements kept it at the forefront of performance. During its three-year production run, ending in 1957, just 8,943 examples were made. Of those, 1,392 were in right-hand-drive configuration while the remaining 7,545 were in left-hand drive. Clearly, the majority were intended for the North American market. Production between the three body styles was fairly similar, with the open two-seater being the most popular, with 3,349 examples built. The fixed-head and drop-head were nearly identical, with 2,790 of the drophead, just eight less than the fixed-head version. Of the 3,349 open two-seaters, just 73 were in right-hand drive configuration.

In 1954 Jaguar introduced the XK140 as a replacement for the highly successful Jaguar XK120 that had first appeared in 1948. The XK Series was conceived by William Lyons as a sleek automobile that sat atop a short wheelbase in a two-seat roadster con....[continue reading]

The Jaguar XK-140 series was in production from 1954 to 1957. It was a continuation of the Jaguar 120 series, which had been introduced in 1949. The motor was Jaguar's venerable 3.4-liter, twin overhead cam motor that developed 210 horsepower.....[continue reading]

XK 140 production lasted three years superseding the XK120 in the 1955 model year, and itself being replaced by the XK150 in 1957. There were useful improvement's the bigger brakes, the adoption of rack and pinion steering and the suspension with fou....[continue reading]

Jaguar's XK140 Special Equipment Fixed Head Coupe - this example in Old English White and Red - was a popular American import, all part of Great Britain's 'export or die' promotion which was still going strong 10 years after WWII had ended. The XK140....[continue reading]

Jaguar offered a Special Equipment performance package for the XK-140 and examples so equipped, such as this Open Two-Seater, were designated MC models. The MC engine featured a higher-compression 'C-Type' cylinder head and had a dual exhaust system.....[continue reading]

The XK140 was the successor to the Xk120 model. The primary differences were increased interior space, better brakes, rack-and-pinion steering, increased suspension travel and the use of tubular shock absorbers.....[continue reading]

Jaguar introduced their XK120 at the 1948 London Motor Show. A fixed-head coupe was added to the line in 1951, and a convertible, 'drophead coupe', with roll-up side windows and a more substantial top was added in 1953. The chassis was redesigned in ....[continue reading]

At the 1948 Earl's Court Show, Jaguar introduced its XK120. Years later, in 1954, it was followed by the XK140 which offered new features and improvements. It was given a redesigned box-section frame with a more supple suspension that included larger....[continue reading]

This car was imported from England by Max Hoffman of New Jersey and sold to the original owner, Mr. R.N. Dovers of Decatur, Illinois, on June 27th of 1955. Mr. Dovers sold it to Edward Werling of Mattoon, Illinois, on an unknown date. Mr. Werling act....[continue reading]

This left-hand drive, fixed head coupe with the SE option package was built on September 22nd of 1955 and dispatched to the United States on October 17th of that year. After being imported to Charles Hornburg's Los Angeles dealership, it was purchase....[continue reading]

This Jaguar XK-140 was produced on October 8th of 1954. It was sold through Hoffman Motor Car Company, the original Jaguar dealer in America. A restoration was completed in 2005. It was manufactured with the racing C-Type head and was the 17th built ....[continue reading] 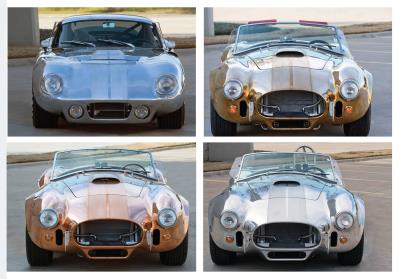 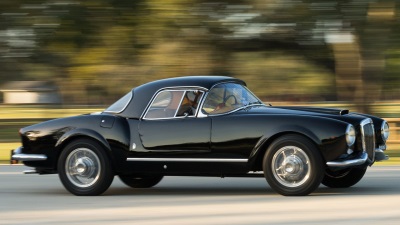 Auburn, IN. January 9, 2016. A strikingly elegant 1955 Lancia Aurelia B24S Spider America is slated to headline Worldwides inaugural Scottsdale Auction on Wednesday, January 18. One of only 181...

Scottsdale, Arizona (December 1st, 2014) – For Enthusiasts – By Enthusiasts. ™ This is far more than a tagline at Russo and Steele Collector Automobile Auctions. Its a lifestyle, and we are gearing...
© 1998-2020. All rights reserved. The material may not be published, broadcast, rewritten, or redistributed.