Suggested vehicles
Specification comparison
Related news
In 1985 Lamborghini began designing and developing a replacement for their successful Countach model. The Lamborghini Diablo was introduced in 1990 and stayed in production until 2001. The name Diablo is Spanish meaning 'devil' and was borrowed from a type of legendary bull raised by the Duke of Veragua in the 19th century. The goal for the Countach replacement was to achieve a 315 Km/h top speed. Marcello Gandini was commissioned to design the bodywork. Chrysler purchased Lamborghini in 1987 which meant Gandini's designs had to pass Chrysler's approval. Adjustments were made that took away from the aggressiveness of the vehicle and focused more on the driver and passenger comfort. The modifications did not draw drastically away from the initial designs and Gandini was satisfied with the outcome. Chryslers influence continued to the interior of the vehicle. The Italian leather seats, steering wheel, and dashboard were all adjustable. The seats could be ordered specifically to fit the driver. The stereo system was an Alpine unit, customizable to the user's preferences with offerings of either a CD or cassette player. An optional remote CD changer and subwoofer cost additional but was still available. A Breguet clock would set the buyer back an additional $10,500 while the factory-fitted luggage cost $2600.

The Lamborghini V-12 cylinder was enlarged to 5.7 liters and given a multi-point fuel injection system. It was placed mid-ship in the Diablo and provided power to the rear wheels. The powerplant was capable of producing nearly 500 horsepower and gave the super-car a top speed of over 325 Km/h. Zero-to-sixty took just over four seconds.

For an additional $4500, a rear wing could be added to the vehicle. The engine remained cool thanks to the rear bumper which served as a spoiler that recycled the warm air from the engine with cool air. The body was mostly comprised of aluminum alloy.

The doors opened up and forward and had side windows that could be rolled down electronically. Visibility was much improved over the Countach. The side windows were designed to allow ample viewing. The rearview mirror was functional and not hindered by the engine lid.

Throughout the years, Lamborghini made subtle improvements to the vehicle. To increase sales and attract new customers, Lamborghini introduced AWD versions, Targa editions, and limited edition variants. Limited edition versions offered customers unique customization, such as the 'Victoria's Secret' theme car. In addition to the specialty and limited editions, Lamborghini offered racing variants. A version was created to compete in the GT1 class at the 24 Hours of Le Mans. Other racing versions, such as the SVS and SV-R were factory-created racing-ready vehicles.

In 1993 to celebrate Lamborghini's 30th anniversary of automobile production they introduced the Diablo SE 30. In an effort to reduce the overall weight, the vehicle was deprived of luxurious amenities. The brakes were enlarged and the suspension was improved, giving the driver the ability to adjust the stiffness of the vehicle's suspension.

The Diablo VT was introduced in 1993 and stayed in production until 1998. The VT, meaning Viscous Traction, was given an all-wheel-drive system, power steering, four-piston Brembo brakes, a computerized suspension system with Koni shock absorbers, and an improved interior. The suspension had two settings that could be selected by the driver. The traction-control system shifted power to the front wheels when the rear wheels lost grip. The first setting was an 'automatic' mode meaning the suspension was controlled by a computer. The 'manual' mode allowed the driver to select between four different driving selections depending on the terrain and driving conditions.

A Roadster version of the VT was introduced in 1995. It had been debuted with the coupe at the 1992 Geneva Auto Show but it took another few years before it was ready for production. It was similar to the coupe but was given a removable carbon-fiber roof panel. Production continued until 1998.

The Diablo SV (Sport Veloce), introduced in 1995 and produced until 1998, was an optional package the included larger brakes, a three-piece adjustable spoiler, a revised dashboard, and an enlarged engine. The 5.7-liter twelve-cylinder engine produced 520 horsepower. The pop-up headlights were replaced with an exposed headlight system.

Auto König of Germany produced a kit for the SV that added to the mechanical capabilities of the vehicle. A twin-turbocharger system increased the engine's output to over 800 horsepower. To combat the extra power, the suspension and brakes received modifications.

1998 was the final year for the pop-up headlights. All models were built with a built-in headlight design.

1999 brought the second versions of the Diablo VT, Diablo VT Roadster, and Diablo SV. All new was the Diablo GT. These versions were only produced for the 1999 model year. The Diablo VT was a combination of mechanical and aesthetic modifications. The pop-up headlights were replaced with exposed headlamps. The dashboard was redesigned and new wheels adorned the exterior of the vehicle. ABS finally made its way onto the Diablo. The brakes were enlarged and a new variable valve timing system (VVT) was added to the V12 engine. With 530 horsepower on tap, the Diablo VT raced from zero-to-sixty in less than four seconds. A Roadster version was available which added a removable roof.

The Diablo ST was similar to the Diablo VT. Its engine featured a 530 horsepower VVT engine. The brakes were enlarged and the exposed headlamps were standard. The main distinguishing features were aesthetics.

The Diablo GT was a limited edition version that was meant for the race track and when introduced, was the fasted production car in the world. Only eighty examples were produced, all were sold in Europe. The engine was enlarged to 6.0 liters and horsepower skyrocketed to 575. The suspension was lowered and given modifications. The brakes were enlarged and provided excellent stopping power. The weight of the vehicle was reduced wherever possible, meaning the interior was void of amenities or luxury items. Wider wheels, flared fenders, and modified bodywork gave the Diablo an aggressive stance and appearance.

The third version of the Diablo VT was introduced in 2000 and produced until 2001. During its production lifespan, only 260 examples were produced. A new hybrid engine replaced the aging 5.7-liter unit. Based on the Diablo GT, the 6.0-liter VVT engine had updated software and a new intake and exhaust system, resulting in 550 horsepower. Titanium connecting rods and a lighter crankshaft added to the engine's improvements. Most of the vehicles were AWD however, upon customer request, a rear-wheel-drive system could be ordered. To improve visibility at high speeds, the windshield wipers were improved. The interior and exterior of the vehicle received styling and modernization updates, including the bumper, dashboards, seats, and more. The interior was lined in leather and airbags were standard for both the driver and passenger. Carbon fiber and aluminum were used throughout the cockpit.

In 2000 production of the Diablo ceased. However, Audi had purchased Lamborghini from Chrysler in the 1990's and decided to produced two special edition versions of the Diablo, the Millennium Roadster and the VT 6.0 Special Edition. The rear-wheel-drive Millennium Roadster was painted in 'Millennium Metallic Silver', featured a carbon fiber rear spoiler, and given the VT roadster's body. The VT 6.0 Special Edition was offered in two colors, 'Oro Elios' (gold) and 'Marrone Eklipsis' (metallic brown). The interior color matched the exterior color. Special electrically adjustable leather seats and dashboard accompanied the Alpine stereo system and DVD audio/navigation system. Twenty-one examples in each color were created, resulting in a total of 42 produced.

In September of 2001, the Diablo was replaced by the Murcielago. The SE was the final installment of the exclusive super-car, the Diablo.
By Daniel Vaughan | Dec 2006Replacing the Lamborghini Countach, the 2-door Lamborghini Diablo SV coupe was introduced in 1990. With a total of 2,903 units produced during its lifetime, the Diablo in the name stands for 'devil' in Spanish and truly classifies the high-performance supercar built by Lamborghini of Italy.

Unveiled on January 21, 1991, the Diablo was introduced at a base price of $240,000. The Lamborghini Diablo sported a 5,7 liter 48-valve variation of the legendary Lamborghini V12 that featured a dual overhead cam and computer-controlled multi-point fuel injection that produced 492 horsepower and 427 foot-lbs of torque. The Diablo could achieve 0-60 mph in a little over 4 seconds and the capability of 202 mph as a top speed. Just like the Countach, the Diablo was rear-wheel drive with a mid-mounted engine.

The Diablo didn't feature as many bells and whistles as other cars with a price tag as extreme. It only came with basic radio functions, powerless seats, and no antilock brakes. Several options were available though, a rear wing spoiler, a customized molded seat for the driver a factory-fitted luggage set (available for $2,600), and an exclusive Breguet clock for the dash (available for $10,500).

In 1993 the Lamborghini Diablo introduced a new version, even more specialized that only attracted more faithful fans. The Diablo VT (Viscous Traction) version was built on the basic Diablo platform, but joined with a viscous-coupling type all-wheel-drive system, resized front wheels and tires that worked better with the all-wheel-drive system, an improved steering system, four-piston Brembo brake calipers and much more. The VT also came with an updated dashboard design along with a new computerized suspension system that had extremely tuned shock absorbers. The Diablo VT was manufactured from 1993 through 1998 while the Diablo VT Roadster was produced from 1995 through 1998.

Lamborghini unveiled its open-topped concept version of the VT at the 1992 Geneva Auto Show alongside the coupe. It wouldn't be until 1995 that this vehicle would be produced. This version was nearly identical to the coupe, except for its removable Targa-style carbon-fiber roof panel and different taillights.

To celebrate Lamborghini's 30th anniversary, the SE 30 Diablo was unveiled and only sold in limited numbers for 1993. A racing variant of the standard Diablo, the SE 30 was introduced with very basic features, no extras, no radio, AC, or sound deadening. The seats in the SE 30 were carbon fiber molded seats to make the entire car lighter. The vehicle also received an advanced adjustment system that was controlled with an interior knock that could instantly adjust the stiffness of the car's front and rear antiroll bars. The SE 30 didn't have ABS, but the discs were enlarged on all four wheels.

An optional add-on package to the base model, the SV (Sport Veloce) model was introduced in 1995 that was produced through 1998. This version didn't have the all-wheel-drive system or electronic suspension, but it did feature the VT's revised dashboard and much larger brakes along with a new 3-piece adjustable spoiler. The Diablo SV was powered by an upgraded version of the 5.7 liter V12 that produced 510 horsepower. Since the vehicle's air intakes were shaped slightly different, the headlamps were exposed rather than the pop-up units used on previous models from 1999 onwards. Considered by some to be the 'ultimate Diablo', the Diablo SV featured an enormous V-12 engine that was modified to reach 510 horsepower.

A tuned variant of the SV was produced by Tuning company Auto König of Germany that featured more suspension modifications, a twin-turbocharger system that pushed the SV's output to over 800 horsepower, and huge brakes.

In 1999 the second version of the Diablo VT coupe and roadster were both introduced, basically with only minor styling updates. The VT's now featured the SV's exposed headlamps along with new wheels and a completely new dashboard. Brakes were now even larger, and the ABS was finally added, along with a new variable valve timing system on the 5.7 liter V12. Horses were now up to 530, and the VT could hit 0-60 in just under 4 seconds. Unfortunately, Lamborghini decided to discontinue the Version 2 Vt's after only one year of production, despite all the money invested in updates.

The Diable SV Version 2 coupe and roadster were also introduced in 1999, and updates were mainly focused on the cosmetic side of the vehicle. The exposed headlamps stayed the same, while new wheels, larger brakes, and a new VVT equipped, 530 horsepower engine.

The SV Diablo versions were also discontinued in 1999.By Jessica Donaldson 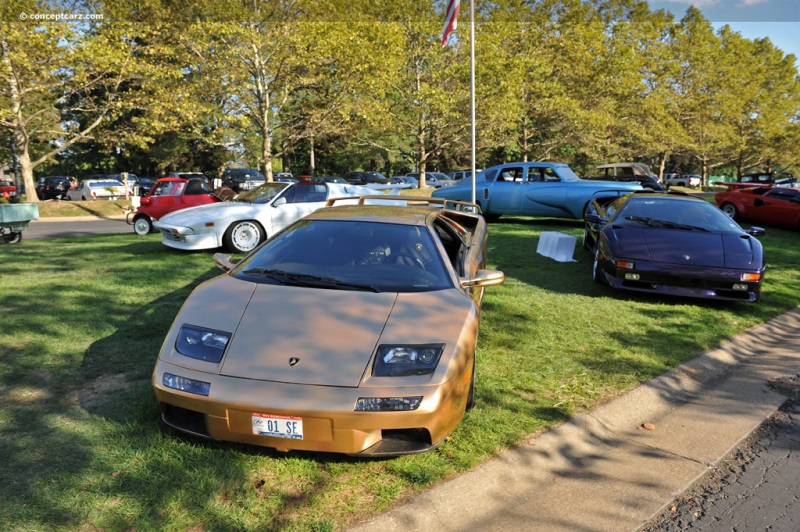