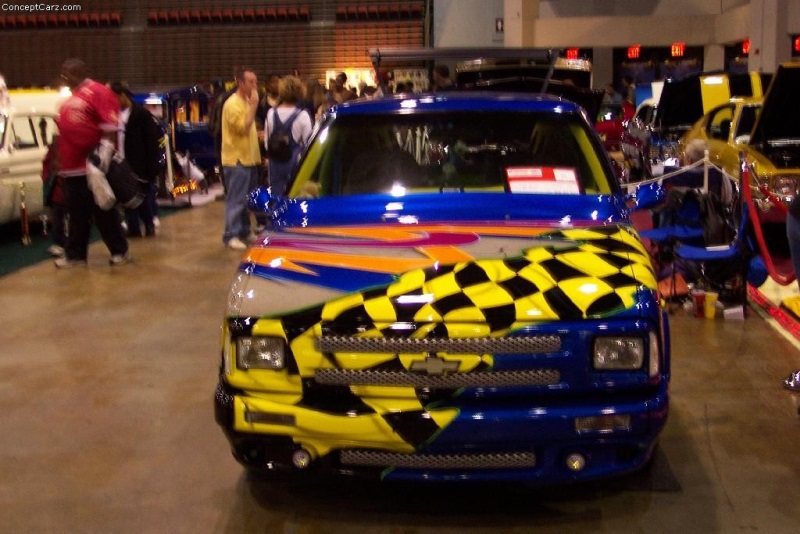 A compact pickup truck, the Chevrolet S-10 was introduced in 1982, one of the first compact truck offerings from the big three U.S. automakers. The original GMC version was dubbed the S-15 before it was renamed GMC Sonoma. Manufactured since 1972 as the Chevrolet LUV, the first compact truck offering from the big three automakers was the rebadged Isuzu KB. GM was forced into designing a domestically produced compact truck because of the '73 Arab oil embargo. Body parts were taken from GM chassis lines as was typical at the time. In 1982 Chevrolet launched the first S-series pickups. It was difficult to tell the Chevy and GMC models apart since they shared most parts except for the grille, tailgate and various insignia. 1983 brought with it two new engines choices, an extended cab and 'Insta-Trac' four-wheel drive. The pickups shared the track width with the former GM H-body subcompacts. Not to be outdone, there was even an SUV version called the Chevy S-10 Blazer/GMC S-15 Jimmy introduced in 1983. GM became the second line to introduced compact sport utilities, following closely behind Jeep, ahead of Ford. In March of 1990 this happened once again when 4-door variants were introduced as 1991 models next to the similar Oldsmobile Bravada. In 1984 updates for this year included new heavy-duty and off-road suspensions along with a hydraulic clutch. The following year the Cavalier's 2.0 L OHV I4 was replaced with the Pontiac 2.5 L 'Iron Duke' OHV I4. The Iron Duke and the updated 2.8 L V6 were the only offerings the following year as they replaced the OHV-derived 2.2 L diesel engine and 1.9 L SOHC gas engines. New for 1988 was an impressive 4.3 L V6 engine. In 1989 the Chevy S-10 received anti-lock brakes.
In 1991 the GMC S-15 was redubbed the Sonoma. To avoid confusion with the new GMC Sierra full-size pickups the Sierra trim packages were all dropped. In 1991 a high-performance model was introduced as the GMC Syclone. In 1992 the Sonoma GT performance package was offered on the 2WD regular cab short bed Sonoma. It was available only as an entry-level version of the GMC Syclone for 1992 and only around 806 versions were produced. Powered the Sonoma GT was an improved Vortec 4.3 L V6 W code engine. Producing 195 hp and 260 lb/ft of torque, the Vortec engine featured central multi-port fuel injection and was fitted with a 4L60 automatic transmission and a limited-slip differential with 3.42:1 gearing. This package was modified by Prototype Automotive Services of Troy, Michigan, which outfitted the Sonoma GT with the Syclone interior package that included a floor shift console, a special gauge package and featured trendy black cloth bucket seats with red piping.
From 1988 through 1991 buyers could opt for the S-10 Baja edition appearance package that could be added to any type 4WD S-10 (regular-cab w/ short-box, regular-cab w/ long box and extended-cab w/ short box). Available in three attractive colors, the Baja package featured Apple Red, Frost White and Midnight Black paint. The package included a front tubular grille guard with fog lights, a tubular rear bumper, a roll bar with off-road lights, an under-body shield package (transfer case shield, fuel tank shield, front differential shield, oil pan/steering linkage shields) and a suspension package. Other features included a Chevrolet windshield banner, and Baja decals on the box sides along with one inch thick body striping. At an additional cost, buyers could add special features to the package like aluminum outlaw wheels, a special box-mounted spare tire carried with aluminum wheels or a cargo-net end-gate. S10 Bajas in 2010 received 'BAJA' embroidered onto the seat backs along with special door panel trim. In 1994 the second generation of the S-Series was introduced. Leaving the lineup were all of the special models like Typhoon, Sonoma GT and the Syclone. The newest competitor for the S-10 was now the new Ford Ranger. The 4.3 L Vortec V6 engine was improved upon and joined a new 2.2 L4-cylinder engine while the Iron Duke 4-cylinder and 2.8 L 60° V6 engines were removed from the lineup. New this generation was the welcome addition of air-conditioning using CFC-free R134a refrigerant thanks to the Clean Air Act mandate. Most of the framework remained the same from the previous generation, along with the leaf springs, differential assembly and the steering knuckle. The axles and the suspension however were overhauled and improved. GM debuted the ZR2 Offroad Package for the 1994 model year. In 1995 new safety improvements meant that a driver's-side airbag was added to the S-10. A third rear door was added in 1996 to extended cab models. Other improvements this year included the 4.3 L engine being updated and the sportside bed option arriving on the scene. From 1996 through 2000 the pickup was sold only in North America as the Hombre. From 1997 through 1998 there was an electric version leased as a fleet vehicle, and together these pickups were often dubbed the S-series. Big changes came in 1998 when the outside, inside and the brakes were all updated in the S-10. The 2.2 L I4 engine was also refreshed this year. More safety improvement was added with the 'next-generation' supplemental restraint system that brought with it a passenger-side air bag. In 1999 new options for the 4WD Blazers was 'Auto-Trac' AWD.

The 'Xtreme package replaced the SS package. A crew cab option arrived in 2001 and was offered in 4WD and automatic transmission exclusively. Leaving only the crew cab model remaining in the S-10 lineup, the regular and extended cab models were discontinued in 2004. Wheels for base 2WD models were 15x6.5-inches with directional vents while Xtreme and ZQ8 wheels were 16x8-inches. 4WD models rode on 15x7-inch wheels while the first generation 14-inch wheels were no longer used. In 2004 this series was replaced by the Chevy Colorado, Isuzu i-Series and GMC Canyon in North America. It was also the final year for the 4-door Blazer except in fleet sales. In 2012 S-Series production was replaced by the Chevrolet Colorado, still retaining the S-10 name.
In 1994 Chevrolet launched a high-performance variant of the S-10, the SS. Extremely rare versions, less than 3,000 Chevy S-10 SS's were ever produced yearly on average. Produced for only four short years, the SS's were available in three exclusive colors: Summit White, Apple Red and Onyx Black. The S-10 Xtreme replaced the SS in 1999.
The main engine found powering the SS version was the 4.3-liter V6, which was an optional engine on regular S-10s and was capable of producing around 180 to 195 hp. The S-10 SS had special features like body-colored bumpers, 16-inch wheels, lowered suspensions and sporty touches and a different grille. SS versions were always regular cab pickups with a step-side version made available from 1996 through 1998. Automatic transmission and 3.42 posi-traction rear end was the only available option.
An exclusive off-road package, the ZR2 arrived during the second generation of the S-10 and brought with a larger wheels and axle bearings, a 4-inch wider track width, a boxed ladder-type frame with updated suspension mounting points, a suspension lift and 31-inch all-terrain tires. Other features included fender flares, alloy wheels, upgraded Bilstein suspension and an 8.5-inch Chevy 10-bolt rear differential with 3.73:1 gears. The rebadged S-10 Isuzu Hombre replaced the Pick Up in 1996. Taking its inspiration from the Brazilian S-10, the Hombre shared the front grille, fenders and truck bed sheet metal with the Brazilian compact truck. Unfortunately the Hombre didn't have many available features and offered a very small range of equipment options. Production ended in 2000 for the Hombre and it would be another six years before Isuzu introduced the next pickup truck, the i-Series.Produced locally in Brazil, the third generation of the Chevrolet S-10 retained the current name for the small compact truck even though the U.S. version of the S-series was dropped in 2004. This latest generation was powered by a 2.8 L diesel engine built by MWM with 140 hp and a 2.4 L Petrol/E-96h ethanol FlexFuel engine with 147 hp. In North American this pickup is rebadged as the Chevrolet Colorado and is built at the same plant as the Brazilian S-10. Eventually production of the U.S. version would be relocated to the GM assembly plant in Wentzville, MO. To make room for the new Colorado's assembly a $380 million expansion of 500,000 square feet with be implemented.Sources:
http://www.s10extremist.org/tech_articles/s10_history.htm
http://en.wikipedia.org/wiki/Chevrolet_S-10
By Jessica Donaldson