Mitsubishi Motors Corporation will unveil its new MITSÚBISHI SST concept car in its world debut at the North American International Auto Show to be held at the Cobo Center in Detroit from January 5 through January 18 (open to the general public from January 10). This marks the first time the company has exhibited a concept vehicle at an auto show in the Únited States.

Giving a peek at the direction a Mitsubishi Motors' sporty model is expected to take in the near future, the MITSÚBISHI SST has been designed by and fabricated at Mitsubishi Motors R&D of America, Inc. (MRDA). 'Geo Mechanical' is the key styling theme, and is given expression in the concept model's muscular body sections, its solid, road-hugging shape and its mechanical aesthetics.

The exterior design combines a substantial surface composition with a compact cabin. Styling elements include large headlight units that house low-beam, high-beam and fog lights at the front, stretched combination light units at the rear and a daring slit along the sides. These elements impart an aggressive flavor that befits a new-age sporty model. The interior features an uncluttered and driver-oriented design.

The MITSÚBISHI SST is a study for a sporty model that Mitsubishi Motors is developing in order to maintain and build on the popularity of the current ECLIPSE and GTO models.
Source - Mitsubishi 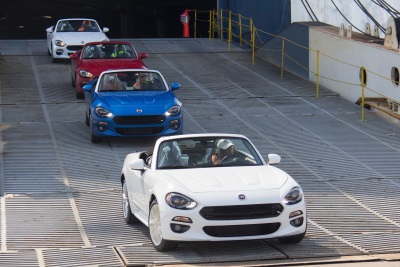 Fiat 124 Spider also named finalist for Best of 2017 Cars.com award Experts from Cars.com determine the Best of 2017 finalists by looking at quality, innovation and value in each nominee The al...

Thanks to its potent turbocharged and intercooled powerplant, precision-tuned handling, communicative steering feel and 4-door configuration, the 2014 Mitsubishi Lancer Evolution is an ultra-high-performance...
© 1998-2020. All rights reserved. The material may not be published, broadcast, rewritten, or redistributed.