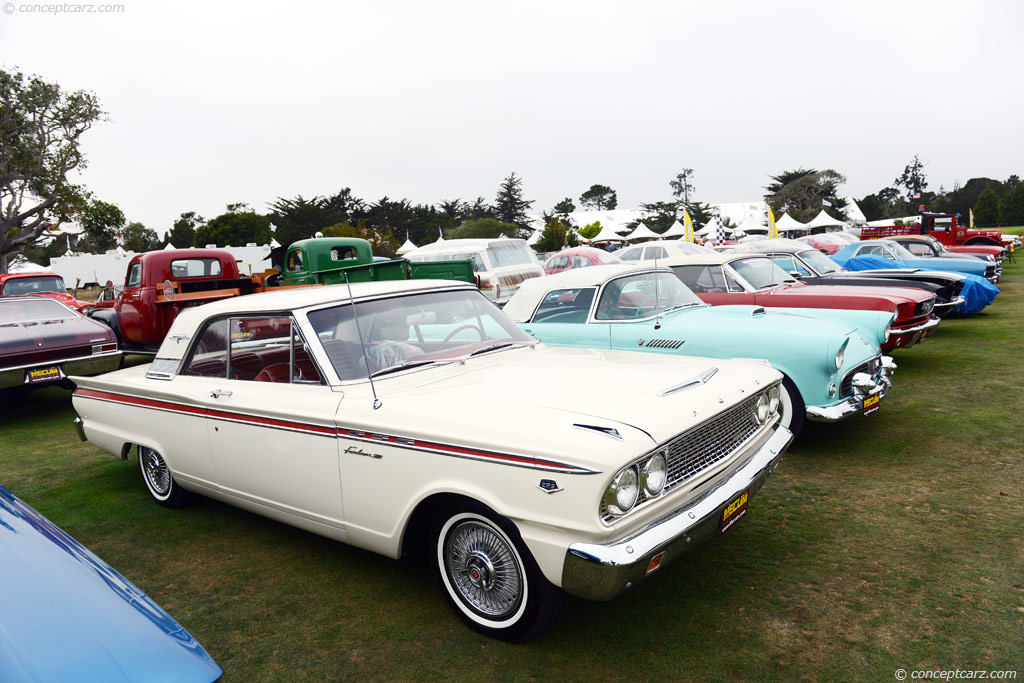 Ford introduced the mid-size Fairlane for 1962, and the upmarket Fairlane 500 two-door Hardtop Sports Coupe joined mid-year in 1963 accounting for 28,268 sales. The Fairlane nameplate was part of the Ford marque from 1955 through 1970, initially built as a full-sized car and moving to the mid-sized platform for the 1962 model year.Originally named for the Henry Ford Estate near Dearborn, Michigan, 'Fair Lane,' its mid-size status placed it between the larger Galaxie and the compact Falcon. They wore conventional styling and instantly recognizable as a Ford, employing unitary construction and independent front suspension to provide safe, predictable handling. Minor styling updates followed for 1963 with updated chrome trim gave a hint of distinction over the 1962 models. The model range expanded to include both Ranch and Squire Wagons, while the Sport Coupe was joined by a true pillarless two-door Hardtop. The 289 CID V8 option, for the first time, was available in two-barrel or four-barrel versions. Equipped with the optional (F-Code) Challenger 260 V8, the Fairlane 500 came with a Holley two-barrel 270cfm carburetor and developed 164 horsepower at 4,400 RPM.
The base engine was a six-cylinder, overhead valve unit displacing 170 cubic-inches and offering 101 horsepower, while the small-block V8 was optional. The V8 was ultimately developed into the legendary 289 CID V8 that powered a generation of high-performance Fords and was rated at 145 horsepower in 221-CID guise. Transmission options included either a three-speed manual with column controls or Ford-O-Matic two-speed automatic, with three rear axle ratios available.
Ford produced 44,454 examples of the 4-door sedan, 28,984 of the 2-door sedan, and 24,006 of the Ranch Wagon.The Fairlane 500 was the top trim level on the Fairlane series. These vehicles were given three chrome window moldings, a chrome horn ring, three chrome exhaust pods near the rear fenders, a stamped aluminum escutcheon panel located between the taillights, and armrests on all doors. There were bucket seats, bucket-styled rear seats, and scallop-patterned cloth and vinyl upholstery. Bodystyles included the 2- and 4-door sedan, 2-door hardtop coupe, 2-door sport coupe, Squire, and Ranch Wagon. Total production was 246,443 with the 4-door sedan proving to be the most popular, with 103,175 examples produced. Just 7,983 were the 4-door Squire.The Thunderbolt
In preparation for the drag racing season, the Ford Motor Company ordered approximately 111 to 127 vehicles to be constructed by subcontractor Dearborn Steel Tubing. The small-block chassis was modified to accommodate the 427 CID engine and transmission. Along with the performance mechanical components, these specially prepared Fairlanes received fiberglass hood and front fenders, Plexiglas side windows, aluminum front bumper, rubber floor mat, lightweight bucket seats, and a radio and heater delete. These vehicles soon evolved into the 'Thunderbolts' for the 1964 racing season. The first eleven examples were painted maroon (known as Vintage Burgundy) while the remaining examples were white. 99 were equipped with manual transmissions. The Thunderbolt raced in the 1964 NHRA Super Stock class, which required fifty cars to be built, with top speeds recorded at 11.6 seconds and 124 mph, earning them the Super Stock title (Gas Ronda) and won the Manufacturer's Cup. New Super Stock competition rule changes requiring 500 examples to be built resulted in an end to Thunderbolt production.
By Daniel Vaughan | Feb 2012