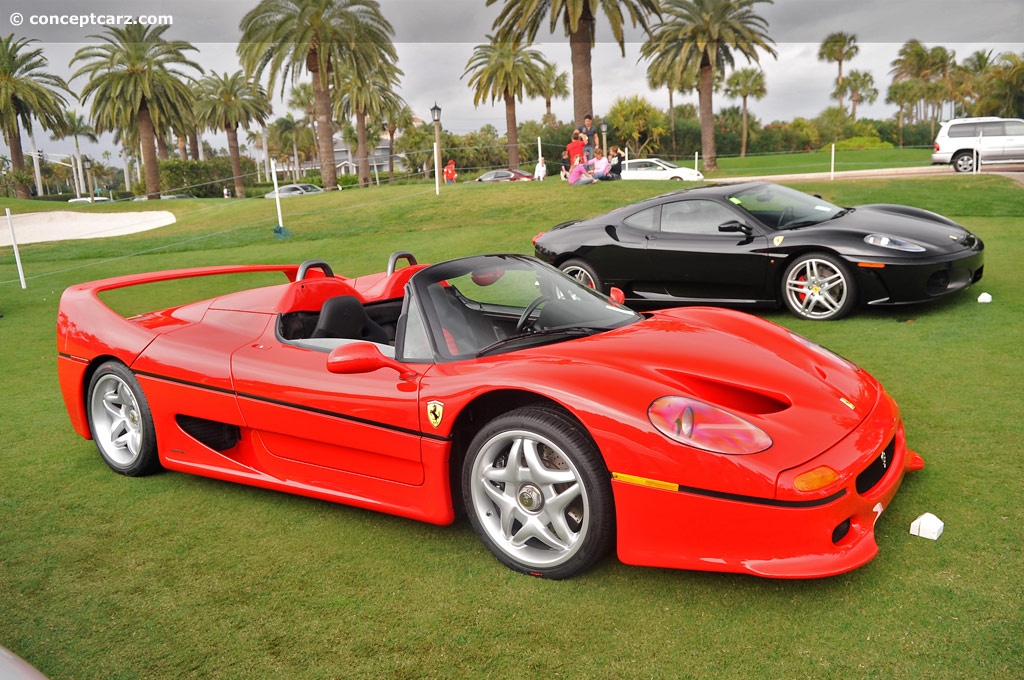 The mid-engine Ferrari F50 (Type F130) was produced from 1995 through 1997 with 349 examples built. The two-door, two seat targa top vehicle was powered by a naturally aspirated 4.7-liter Tipo F130B 60-valve V12 engine that was a development from the 3.5-liter V12 found in the 1990 Ferrari 641 Formula One car. It followed the cessation of F40 production in 1992, and served as the successor to its 40th anniversary supercar. The 50th anniversary model represented an evolution in performance and appearance.

The 513 horsepower engine allowed the F50 to sprint from zero-to-sixty mph in 3.6 seconds with a top speed of 202 mph. The Pininfarina-penned body paid homage to sports racing prototypes and had a similar wedge form to the F40, but with a softened form and more curved edges. The carbon-fiber tub was clothed with carbon fiber and Kevlar honeycomb, the clamshell body had deep air vents in the hood to provide the necessary cooling air for the front radiator. In the back was an enormous airfoil located on the tail. The removable hardtop allowed the supercar to be either a barchetta or berlinetta. Solid mounts were used to hold the 4.7-liter V12 engine into the car. The 65-degree V12 was located just ahead of the rear axle. A carbon-fiber-reinforced polymer intake supplied air, and cooling came via an oil-water intercooler located between the transmission's lubrication system and the engine. A longitudinal six-speed manual transmission sent power rearward to a limited-slip differential.

The suspension was comprised of rose-jointed unequal-length wishbones front and rear, with Bilstein electronically adaptive dampers. There was unassisted power steering and large Brembo brakes. There was an aircraft-grade Sekur fuel-tank bag and an electronically adjustable ride height which allowed it to clear curbs during street driving.

With the potent engine and lightweight components, the F50 tipped the scale at just over 3,000 pounds. It raced around the course at Fiorino four seconds faster than the F40 that preceded it. As Luca di Montezemolo proclaimed, the F50 would be 'the first and last Formula 1 car with two seats.'

Of the 349 examples built, 55 were sent to the American market.

Shown at the 1996 Geneva Motor Show, the Ferrari F50 was an early celebration of the marque's 50th anniversary.

The Sultan of Brunei is known to have commissioned at least two examples, one in red and the other in a decidedly period turquoise.
by Daniel Vaughan | Dec 2019

The Ferrari F50 was not introduced until several years after company founder Enzo Ferraris death, but its safe to say that that model would have been one of Enzos favorite road-going Ferraris. Admittedly, that isnt saying a whole lot—Enzo cared very little for road cars, and allowed their production only to provide income with which to run his famed racing operations. The F50, though, was about....
Continue Reading >>

In its early days, over 50 years ago, Ferrari built cars which could be used, with only a few minor alterations, for Formula 1 or Sportscar events or everyday on the street. However, as Formula 1 cars evolved, it became impossible for someone who was not a team driver or a collector capable of passing a series of private tests on the track, to take the wheel of a racing Ferrari. Ferrari decided to....
Continue Reading >>

1996 marked the 50th Anniversary of Ferrari, and with it came the revolutionary F50. The smooth contours and sleek body became an instant hit. Ferrari had begun designing cars that could be both streetwise and racetrack worthy. 50 years of know-how was integrated into the design of this vehicle. It will be impossible to do it again, said Luca di Montezemolo, Ferrari president. Designed with....
Continue Reading >>

Any car wearing a black prancing horse on a yellow background already holds a place of respect amongst automotive enthusiasts. But to be the model designed by the company to celebrate 50 years of automotive excellence bears an even greater weight of ....[continue reading]

The Ferrari F50 was the prelude to the company's 50th anniversary celebration and made its debut at the 1994 Geneva Motor Show. It signaled a return to traditional values along with being a showcase for state-of-the-art engineering. t was the first ....[continue reading]

The Ferrari F50 had been designed and engineered to be driven on the road, but was an F1 car at heart. The 436-pound V-12 engine mounted mid-ship produced 520 horsepower and could reach an impressive 10,000 RPM. The six-speed longitudinal gearbox, co....[continue reading]

Originally owned by the Sultan of Brunai, this Pininfarina coach built automobile, with carbon fiber body construction, is one of 359 cars produced to celebrate the Ferraris 50th Anniversary. The cost per automobile was approximately $569,690.00....[continue reading]

This vehicle is the 38th of 349 examples built. It was finished in Rossa Corsa with red and black seats. It has acquired around 4,000 street miles since new. It rides on its original Goodyear Eagle F1 GS-Fiorano tires. ....[continue reading]

This Ferrari F50 is one of 55 examples delivered to the United States. It has only 230 actual miles and is completely untouched and as-new in all regards, including its factory paintwork. The car has a full set of factory tools, as well as an origina....[continue reading]

The Ferrari F50 was a Formula 1 car for the open road. The 4.7-liter naturally aspirated V-12 engine with five valves per cylinder and twin overhead camshafts per bank delivered 52 horsepower at 8000 RPM. It's redline was an eardrum-shattering 10,000....[continue reading]

Ferrari allotted 55 examples of the F50 for the United States, and all were available under a special two-year leasing program. The program was to weed out the flippers from the true Ferrari enthusiasts. It required a $240,000 down payment, followed ....[continue reading]

This Ferrari F50 is the 16th built for the United States and was sold new by Miller Motorcars to John Hirsch of Greenwich, Connecticut. In 2000, it was acquired by the principal of Ferrari of Atlanta and then treated to a rigorous service regiment. T....[continue reading] 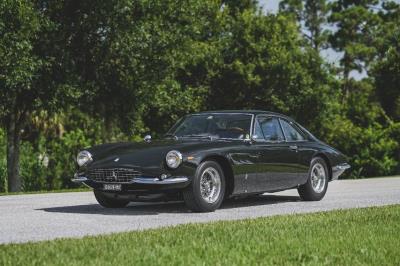 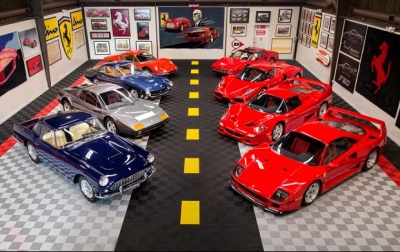