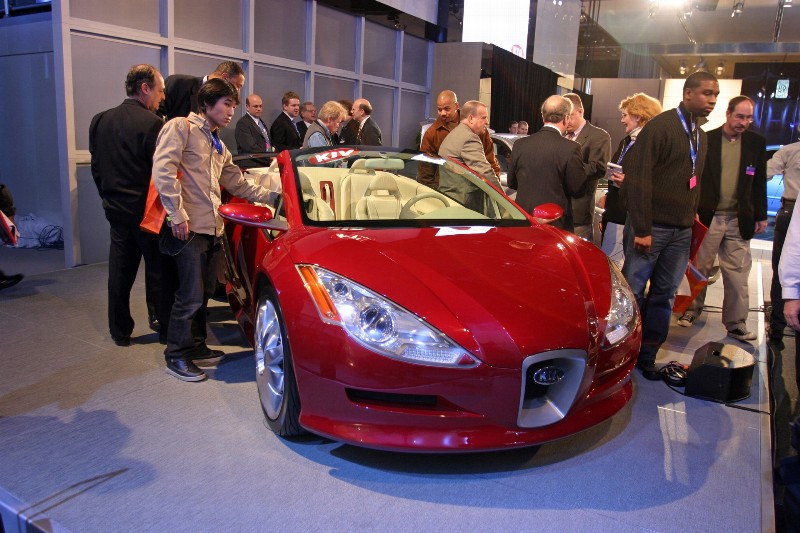 Kia Motors' KCV III, the latest concept vehicle from Korea's oldest and second largest automobile manufacturer, was designed at the Namyang R&D centre, the research hub the company shares with sister company Hyundai Motor. The KCV III is a small coupe convertible that showcases the best-of-breed technologies that Kia will be incorporating in its future products both in the Ú.S. and globally.

Kia Motors is one of the fastest growing automotive brands in the world, thanks in part to an increased focus on developing a young, sporty image of the brand while maintaining its reputation as a customer driven value manufacturer. The KCV III exemplifies Kia's brand values with an unmistakably forward looking design complimented by a full range of safety and convenience features drawn from the best technologies available in the market today. 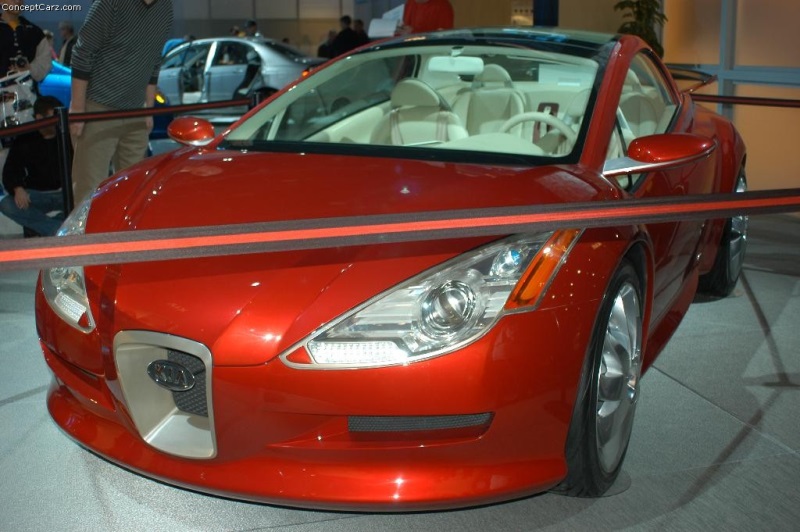 Designer Jae-Rim Lee says of the car, 'We wanted to design a car that looked good on the road but also one that answered the basic needs of our customer. The car is intended as a multi-purpose vehicle and we built a great deal of versatility into the styling. Últimately, the KCV III is designed to put the fun back into motoring.' 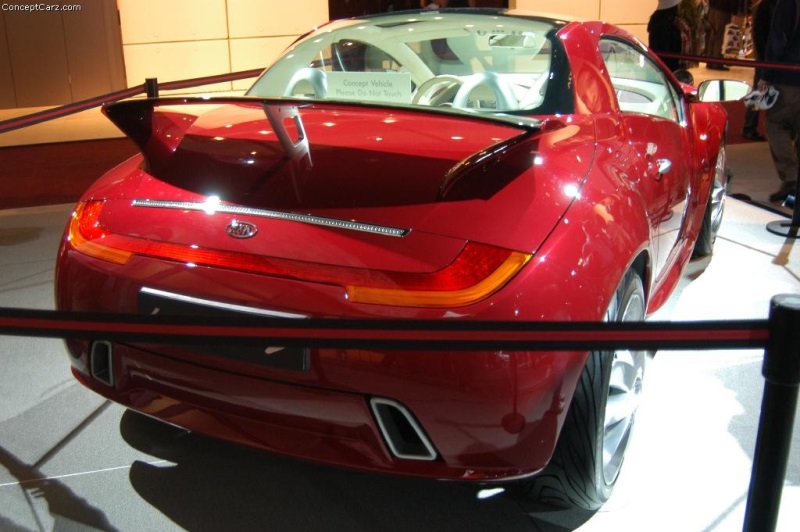 Aimed at customers aged between 20 and 30, the KCV III plays very much to Kia's appeal to the Y-generation. Generation Y is the successor to Generation X – young consumers born between 1977 and 1994. In the Ú.S. market, these consumers account for 28% of the population – expected to reach 63 million consumers by 2010. Gen-Y consumers are expected to purchase 3.5 million cars per year in the Ú.S. by 2010, or 20 per cent of total industry sales, and 5 million cars annually by 2020. 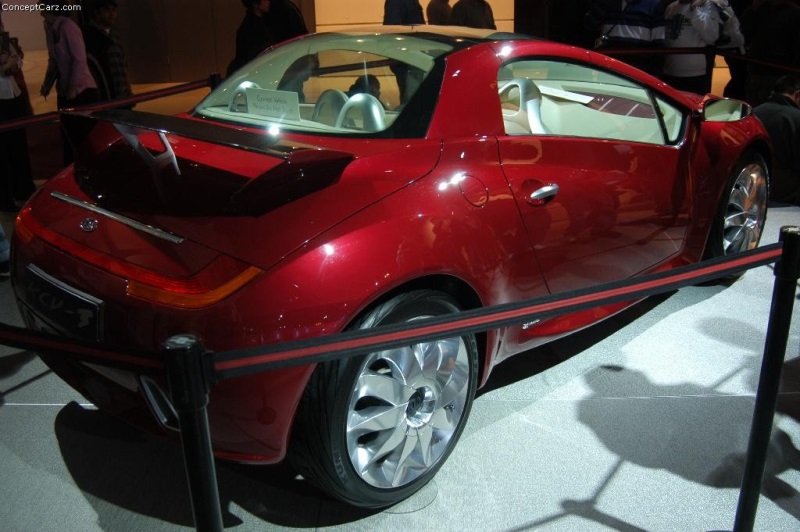 Gen-Y buyers are price sensitive, but also style sensitive. They are attracted by edgy designs, but they rely on price advice from family and friends rather than from the Internet, the favored tool of Generation X. Low interest rates and resale value are less important – Gen-Y buyers want instant gratification, they discount future costs and are concerned more with being 'cool' than being cautious. Peer recognition is a significant driving force in a buying decision. They are less loyal to domestic brands and prefer cars that reflect their individuality and are fun to drive.

Kia is already the most popular brand among Gen-Y buyers in the Ú.S. 16% of Kia's buyers in the Únited States are Gen-Y – no doubt contributing to the fact that the average age of a Kia buyer is one of the lowest in the industry, at 41.

Interestingly no single Kia model ranks in the Top 5 model picks, implying that the appeal of the brand to younger buyers extends across the entire range. By providing a model that will capture the imagination of these style-sensitive consumers, the KCV III is intended to cement Kia's position as the brand of choice for the next generation of car buyers.

Design
'The KCV III is a dynamic, arresting car that is as much fun to look at as it is to drive,' says Jae-Rim Lee.

Huge high-definition headlamps extend up the wheel arches and highlight the narrow radiator grille and prominent air dam. The side view is dominated by massive 20-inch wheels, giving the KCV III a low-slung, racy appearance that is backed up by a four-cylinder inline DOHC engine that displaces 2.0 liters and generates 145 ps (108 kW) at 6,000 rpm. Torque is a healthy 19.4 kgm (190 Nm).

The doors are angled down toward the front for a more dynamic look and the slender roofline and A-pillar improves all round visibility. The roof, which folds down at the touch of a button, is composed of three panels of solar control glass.

'The problem with a traditional convertible is that you can't enjoy the outdoors if it's too cold to put the roof down,' says Mr. Lee. 'With the KCV III there are no barriers between you and environment, so you get the fun of top-down motoring even the weather is unsuitable.' 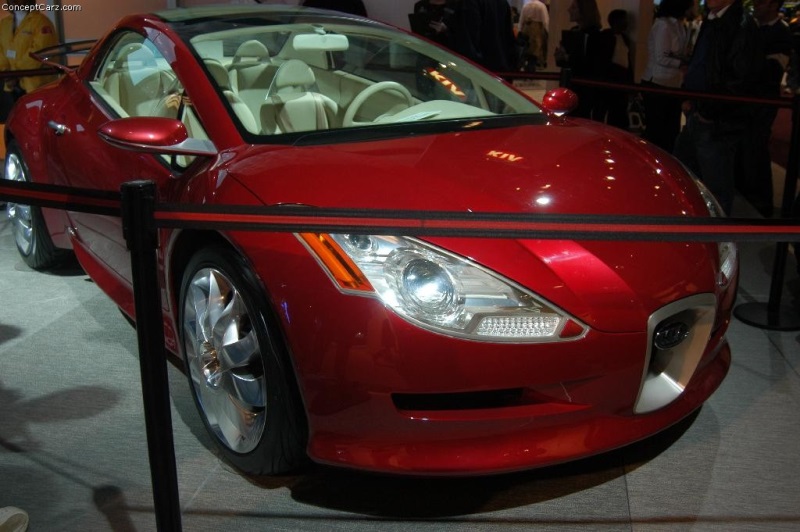 Deep character lines emphasize the high wheel arches and give the car a powerful, stable look. The rear takes its cue from high-performance sports cars and its rounded contours highlight the vehicle's aerodynamic styling.

Safety
Safety features include advanced airbags that sense whether the passenger seat is occupied before deploying. The system also integrates with seatbelt sensors to detect whether or not a seatbelt is being worn. In the event of a collision, the airbag system will gauge the severity of the impact and deploy accordingly. If seatbelts are not being worn, the airbags will deploy at lower speeds to increase protection of the occupants.

Active headrests move forward in the event of a collision, preventing the whiplash injuries that are common even in minor accidents.

A further safety feature is seat-integrated roll bars that provide added protection in the event of rollover accidents. 'Vehicle safety regulators are increasingly focusing on roll-over protection,' says Mr. Lee. 'Adding the roll bars meant that we could not only keep pace with that trend but also gave us a styling element that adds to the modern, sporty look of the car.'

Another area attracting increasing attention from safety regulators in passenger protection. The KCV III is designed with special 'soft spots' in the front bumpers and hood to cushion the impact if the car were to hit a pedestrian. The windscreen wipers are recessed to avoid causing additional injury.

Of course, the driver would hope never to have to use such features. Helping prevent accidents is an electronic stability program, employs sensors to monitor each road wheel, the steering wheel angle, throttle position, acceleration and yaw. It compares data on the intended direction of the car and the actual track of the car. When a potential skid is identified, the ESP 'sees' the problem by constantly comparing the status of the car to a computer generated reference model based on the current situation.

The system is able to correct driver errors and also to give greater control in wet, icy or slippery conditions. More importantly, the system is constantly operating and thus able to make precise adjustments even during an extreme emergency maneuver. ESP is therefore able to defuse potential accident situations under extreme conditions, even before the driver has a chance to react.

The ESP is supplemented by a brake assist system that overrides the typical driver's inclination to brake too slowly or too late by increasing power to the brakes and bringing the car to a stop in the shortest possible distance.

Comfort and Convenience
As well as being fun to drive, the KCV III is designed to be easy to drive. 'The guiding principle was to ensure that the driver is able to keep both hands on the wheel for the maximum amount of time,' says Mr. Lee.

Simplifying driving still further is an advanced adaptive cruise control system. The system allows the driver to set a desired speed and then drive without maintaining pressure on the throttle. The KVC III incorporates a radar sensor at the front that detects cars in front and activates the brake to regulate the vehicle's speed automatically. When the car in front is passed or moves aside the cruise control system automatically resumes the previously set speed.

Another sensor to the rear of the car detects obstacles when the KVC III is reversing and sounds an alarm in the cockpit to alert the driver.

The KCV III incorporates a mobile telematics system programmed via an in-dash DVD player. The driver programs a destination into the navigation system and is then guided by a set of audible and visual cues. The system recalibrates whenever the route is changed.

Incorporated into the RDS radio is an MP3 player, reflecting the growing popularity of this music format among younger consumers. Access to the vehicle is via a personal key card that contains an integrated circuit that both unlocks the doors and starts the engine.

Summary
'We designed the KCV III to be particularly attractive in the European market,' says Mr. Lee, 'and we took our styling cues and feature list from trends that we observe in Europe. The KCV III combines highly evocative styling with a range of technologies that are already appearing in the latest Kia cars. In this is respect it is a showcase for future models rather than a 'new take' on the automobile.'

Although the KCV III is not currently scheduled to go into production, the possibility has not been ruled out. With 17 new cars due to arrive on the market by 2007, Kia's product schedule is already intensely demanding. Mr. Lee is enthusiastic, however, about the car's appeal.

'I would like to think that we could see something like the KCV III coming out of Kia by the end of the decade,' he says. 'It's a great looking car and one that would make a fantastic addition to the Kia range.'Source - Kia 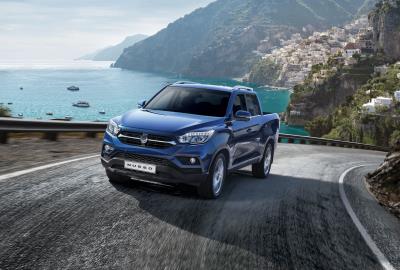 New SsangYong Musso Pick-Up To Feature At The CV Show