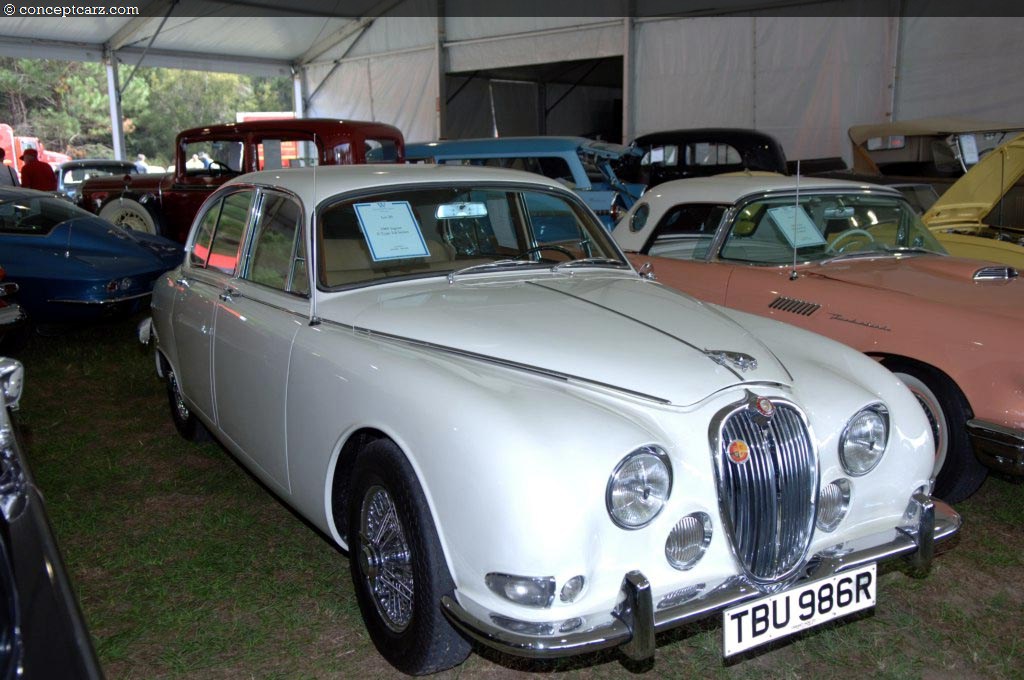 The Jaguar Mark II was introduced in October 1959 and continued in production until 1967. The MKII was built as a replacement for the 2.4 and 3.4-liter saloon, also known as the MKI.

The MK II was based on the MKI, but the result was different in many ways, both aesthetically and mechanically. Improvements in the design and modern materials resulted in a reduction of overall weight. The interior was completely redesigned but retained its luxury and elegance with such amenities as leather and wood veneer. The attention to detail both inside and out, only amplified the ambiance of sophistication. Leather seats continued to be standard until 1967 when Jaguar offered it as optional in an effort to reduce the cost of the vehicle.

The interior of the Mark II was truly a masterpiece with its beautiful walnut veneer dash, plush leather seats, and multiple gauges now placed in easy distance from the driver along with a row of toggle switches. The cabin space was updated with 18% more cabin glass area, which majorly improved the visibility. The Mark II had a wide windscreen thanks to new slender front pillars. The rear windows nearly wrapped around to the enlarged side windows now with the familiar Jaguar D-shape above the rear door and completely chromed frames for all of the side windows. The larger side, tail, and fog lamps found a new home as the radiator grille was updated. A new heating system was added to the Mark II and ducted to the rear compartment.

Powering the Mark II was the DOHC aluminum six-cylinder, in 2.4-liter, 3.4-liter and 3.8-liter displacement from the Mark I. The fast and capable Mark II had a top speed of 125 mph and had an estimated 210 horsepower. The saloon came with a 120 bhp, 210 bhp, or 220 bhp Jaguar XK engine. The 3.8 engine is very similar to the unit used in the 3.8 E-Type and shared the same block, crank, connecting rods, and pistons but had a different inlet manifold and carburetion, so it was 30 bhp less. Compared to the straight ports of the E-Type configuration the head of the six-cylinder engine in the Mark II had curved ports. The 3.4- and 3.8-liter models were fitted with twin SU HD6 carburetors while the 2.4 was fitted with twin Solex carburetors.

The transmission was typically a four-speed with overdrive though some Borg-Warner automatics were purchased, usually, in the U.S. The Mark II featured independent suspension all around, and most of the models were constructed with wire wheels. Four-wheel disc brakes were standard and the 3.8-liter was supplied fitted with a limited-slip differential. The Mark II was more than 100 kg heavier than the 2.4 / 3.4 models.

A total of around 85,000 of the Jaguar MK II models were produced during its lifespan from 1959 to 1967. For the last twelve months of its production period, the MK II was re-labeled Jaguar 240 and Jaguar 340.

The Mark II has been portrayed in the media as either the perfect vehicle to start a car chase in, or to apprehend the lawbreakers in. With a top speed of 125 mph, the 3.8-liter model had room for up to five adults and was a popular getaway car choice. The car was also employed by the police to patrol British motorways. Fictional TV detective Inspector Morse drove a Mark II with a 2.4 L engine, steel wheels, and Everflex vinyl roof in his popular television series, which later sold for more than £100,000.

The Mark II cars were re-labeled 240 and 340 in September of 1967 as interim models to fill the void until the XJ6 would be introduced the following September. The 3.8-liter engine was dropped from the lineup. Once the XJ6 arrived on the scene the 340 was discontinued, but the 240 continued as a budget-priced model until April of 1969. Carrying a price tag of only £1364 the Jaguar 240 was only £20 more than the original 2.4 in 1956.

Output increased from 120 bhp at 5,750 rpm to 133 bhp at 5,500 rpm of the 240 engine. The torque was also increased and the engine now had a straight-port type cylinder head and twin HS6 SU carbs with a new inlet manifold. The 240 received an upgrade to a Borg-Warner 35 dual drive range instead of automatic transmission. The 340 now offered power steering by Marles Varamtic.

The 2.4-liter model could go faster than 100 mph for the first time, which resulted in higher sales. The servicing intervals were increased from 2,000 miles to 3,000 miles and there was a bit of modification in the shaping of the rear body while slimmer bumpers and over-riders were fitted. Amble leather-like material and tufted carpet replaced the rich leather upholstery that had graced the earlier Mark 2. The front fog lamps were replaced with circular vents and optional fog lamps for the UK market. The price of the 240 was reduced in an effort to compete with the Rover 2000 TC. Total production of the 240 and 340 series totaled 7,246 units with 4,446 240's sold, 2,788 340 models, and 12 380 models before the XJ6 was introduced in September of 1968.

Despite its hefty price tag and rigorous maintenance schedule, the timeless MK II is quite a popular collectible today. The bodylines of the Mark II (derived from the Mark I) proved to be the inspiration for the Jaguar S-Type introduced in 1999.