Ford unveiled the first Thunderbird Oct. 22, 1954. The 2005 model marks the 50th anniversary of the legendary convertible.

Thunderbird is built in Wixom, Mich.

Thunderbird comes standard as a convertible and offers an optional removable top with classic porthole windows. The removable top weighs 83 pounds for easy removal and installation.

A secure pin-and-bolt system at the two front attachment points, plus two clamps at the rear, connect the removable top to the car. The two-place interior reflects the exterior design and the car's romantic heritage with bold style, combined with the comfort and convenience that today's customers demand.

Thunderbird is in a class by itself as a 107.2-inch wheelbase rear-wheel-drive roadster with a smooth, free-breathing 3.9-liter V-8 engine.

Ride and handling are specially tuned, and structural braces under the car enhance the chassis rigidity, giving the roadster world-class driving dynamics.

The 2005 Thunderbird echoes the relaxed look of the original in a distinctly modern interpretation. Key design elements include the classic egg-crate grille found on the 1955-57 Thunderbirds and a hood scoop reminiscent of the 1961 model.

At 6.9 cubic feet, Thunderbird's fully lined trunk is spacious enough for two sets of golf clubs. A soft vinyl boot is available to cover the black, woven soft-top when it's down.

Inside, Thunderbird provides a comfortable environment for its occupants. The black instrument panel is highlighted with bright accent colors and aluminum appliqués.

The center stack flows out of the instrument panel with a sculpted line that creates a waterfall effect leading to the console. The standard interior has black leather-seating surfaces. A color-coordinated theme is optional for those who want to accent the interior and exterior colors.

The 3.9-liter delivers 280 horsepower at 6,000 rpm and 286 pound-feet of torque at 4,000 rpm. The engine features coil-on-plug ignition with platinum-tipped spark plugs, lightweight, low-friction pistons and dual exhaust. The Thunderbird is available with an optional SelectShift automatic transmission that allows drivers to command gear changes similar to a conventional manual transmission, but without the clutch. The transmission features a one-piece die-cast aluminum case for reduced weight.

Thunderbird features a number of standard safety attributes. Among them are the SecuriLock™ anti-theft system, the Smart Locks system, the LATCH system, the perimeter alarm with an LED indicator and Ford's glow-in-the-dark emergency trunk release handle, which enables a person trapped in the trunk to open it from the inside.

Production of this special edition model with exclusive Cashmere color, which begins in January 2005, will be limited to 1,500 units.

'The 50th Anniversary Limited Edition Thunderbird builds upon the car's rich heritage - which began with the classic, two-seater 1955 model,' said Steve Lyons, president of Ford Division. 'This special edition adds to the emotional attachment that America has with Thunderbird, an attachment that has been 50 years in the making.'

New coordinated Cashmere, Stone and Soft Gold interior packages include full leather Cashmere seats, and Cashmere trimmed lower instrument panel, floor console and door armrests. An understated Soft Gold tinted 50th Anniversary badge will be placed on the instrument panel, and 50th Anniversary insignias are embossed on the seatbacks. The scuff plates also are tinted Soft Gold. Each vehicle will feature a numbered commemorative plaque mounted on the inside of the glove box. The steering wheel and shift knob will be trimmed with high gloss Cashmere accents. Stone colored carpets with matching floor mats complete the interior.

'The 50th Anniversary special edition is very elegant and emphasizes the calm, cool and collectible nature that is Thunderbird,' said Lyons.

Reflecting on 50 years of heritage for the Thunderbird, club members from across the country will enjoy a trip back to the boppin' fifties with the spirit of the classic hamburger stand and drive-in movie theater. Ford, will construct a unique drive-in theater at the race track and show one of the most famous movies to star the Ford Thunderbird - American Graffiti.

The 2005 Ford Thunderbird will have a manufacturer's suggested retail price of $37,605 and the special edition 50th Anniversary Thunderbird of $43,535, both without destination and delivery charges.

In the spring of 2003, Ford sold 700 limited edition '007' Ford Thunderbirds to commemorate the first appearance of a Thunderbird in the 40-year history of the James Bond film franchise. A '007' Edition was driven in the Bond film Die Another Day by Academy Award-winning actress Halle Berry. One thousand Pacific Coast Roadster Thunderbirds were sold in 2004.Source - Ford

On November 5th of 2004, at the Miami Auto Show, Ford debuted a new Special Edition Ford Thunderbird in honor of the 50th anniversary of America's original 'personal luxury car.' The first example was built on January 3rd of 2005, and only 1,500 were....[continue reading]

The 50th Anniversary, the last year Thunderbirds were built, came in many colors, however, the Limited Edition was only available in a Cashmere Metallic Clearcoat. This Clearcoat carried through to the typically chrome grille, the hardtop, the sidevi....[continue reading] 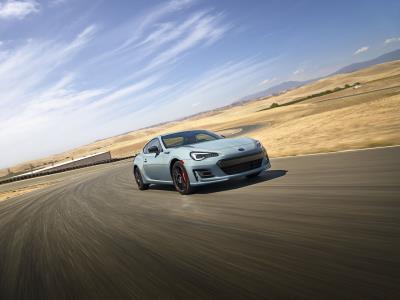