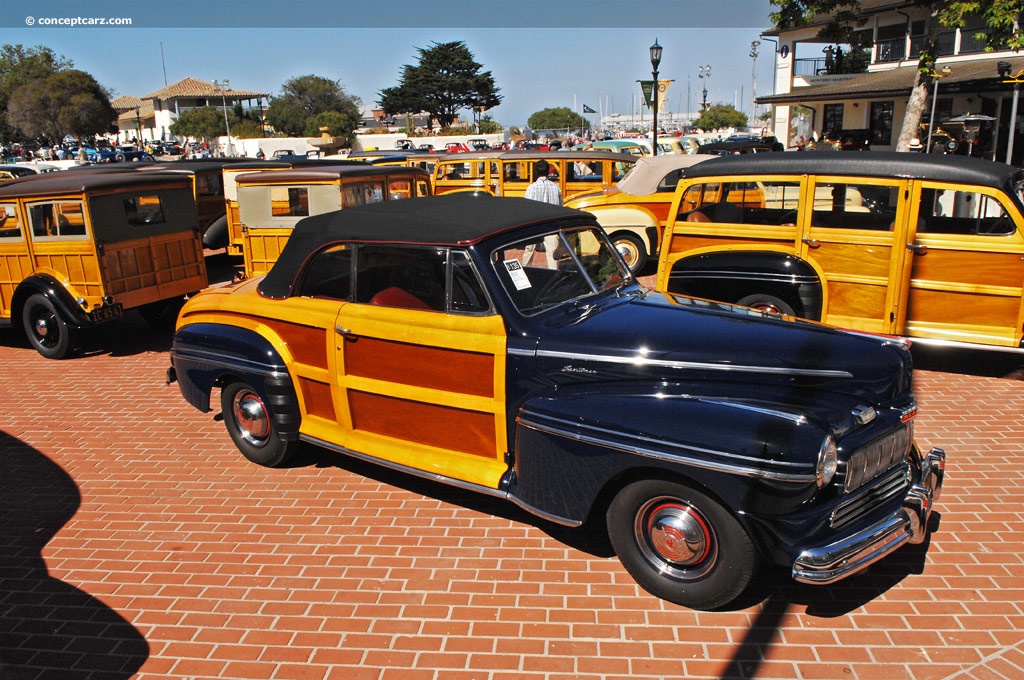 1942 was the final year of automobile production prior to the shut down in support of the war effort. After World War II, civilian automobile production resumed in 1946 with most manufacturers offering mildly updated styling on its pre-war vehicles. New Ford / Mercury / Lincoln designs and models were scheduled for introduction in June of 1948, so all of the company's efforts and resources were focused on their success. The first all-new postwar Mercury's wearing new and modern designs were introduced on April 29th of 1948.

Like most automakers, Ford worked quickly to meet the pent-up demand for new cars while battling labor disputes and materials shortages. The 1946 Mercury wore a new grille with thin vertical bars surrounded by a larger body-colored trim piece. Body styles were extensive, with two-door styles that included a sportsman convertible, sedan, sedan coupe, and a convertible. Four-door body styles included an eight-passenger station wagon and town sedan. Despite the production problems and shortages, Mercury finished the year in 12th place among American car manufacturers.

The 1946 Mercury was powered by an L-head V-8 engine displacing 239.4 cubic-inches and developing 100 horsepower at 3,800 RPM. It was backed by a three-speed manual transmission and the Liquamatic Drive automatic option was no longer available.

Both Ford and Mercury received the Sportmans model for 1946, with the Ford Super Deluxe version costing $1,982 which was roughly $500 more than a standard convertible. The Mercury Sportsman, introduced in April of 1946, sold for $2,209 which was about the same margin over a regular Mercury convertible. This new body style was in response to the Chrysler Corporation's novel barrel-back Town & Country sedan-wagon introduced prior to the start of the war. It was produced as a Royal in 1941 and Windsor in 1942. Although they planned on producing five woodie styles for 1946, only a Windsor sedan and New Yorker convertible were put on sale. Nash offered an Ambassador sedan and sold it as the Suburban from 1946 to 1948, and Chevrolet offered a dealer-installed Country Club wood kit for its 1946 through 1948 models.

During the war, Henry Ford II had tasked chief designer E.T. 'Bob' Gregorie to create a body for a Model A chassis that was sitting in a corner of the Ford design studio. Gregorie penned a wood-bodied convertible with a forward-sloped tail, Continental spare, two doors, a khaki top, and a red leather interior. The coupe design was stylish, with a pillar similar to that of the late 1920s Model A closed cars. The design was applied to the Model A chassis and used by the Fords for a summer on Long Island, after which it was given to Gregorie, who kept it and took it to Florida after his retirement.

The postwar Ford product line shared many design cues with the Model A convertible. In the early part of 1945 Gregorie and his lead illustrator, Ross Cousins created drawings for the wood-bodied 1946 convertible. An early production convertible was removed from the production line and built as a prototype at Iron Mountain using wood ford the body. To help restrain costs and simplify manufacturing, convertible parts were used wherever possible. The wood framing was larger than the equivalent steel, resulting in the back end being bulkier and the convertible fenders would not work. So the team simply used the taillights and rear fenders from the 1941 sedan delivery. Sportsman seats were upholstered in genuine leather facings in red or tan, with French stitching. Power windows were standard, and the front floor mats had color-keyed carpet inserts.

Though the war had ended and automobile production resumed, it would be several years before most automakers introduced a new product. Most just made a few changes to their pre-War line and tried to quickly settle the publics demand for vehicles. ....[continue reading]

Mercury was added to the Ford Motor line of cars in 1939 and was positioned between the Lincoln and Ford products.....[continue reading]

In order to enhance this Mercury's drivability in rough terrain, renowned nature photographer Don Bleitz had it fitted with Marmon-Herrington four-wheel drive, creating a 'sports utility vehicle' more than forty years before the term was popularized.....[continue reading]

For the 1946 model year, the 69M received a new grille. The Liquamatic Drive automatic transmission option was no longer offered. The Sportsman convertible, featuring wood body panels, was new for this year and only 205 were produced during the 1946 ....[continue reading] 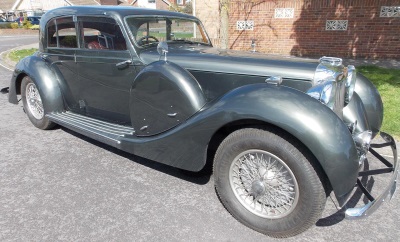