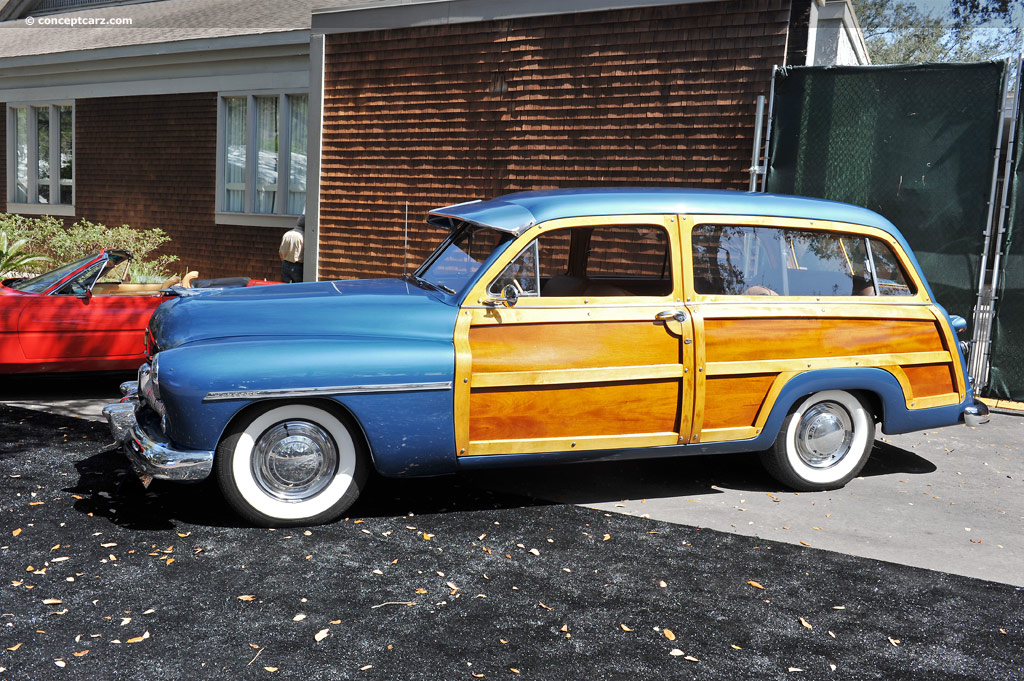 The Mercury Series 9CM was introduced on April 29th of 1948. World War II had halted automobile production and when it resumed after the war, most marque's were offering vehicles similar to the pre-War styles. Little changed for a few years; for Mercury, this change did not happen until 1948 when they introduced the Series 9CM. They shared similar styling to Lincolns and used chrome in the bumpers and trim. The sedans had doors that opened towards the center and the wood-bodied station wagons had only wood trim. The cars rested on a 118-inch wheelbase and powered by an eight-cylinder engine that displaced 255 cubic-inches and capable of producing 110 horsepower.

The all-new 1949 Ford vehicles were designed by outside consultant George Walker and his team. The in-house studio of E.T. 'Bob' Gregorie had also provided competing proposals. Gregorie had created three similar cars in three different sizes: Ford, Mercury, and Lincoln. Walker's design was chosen for the low-priced car and the Gregorie proposal became the Mercury, Lincoln, and Lincoln Cosmopolitan, respectively. A smaller version went into production at Ford France as the Vedette.

The new Mercury used its former 118-inch wheelbase yet was a much larger-looking car than the Ford. The basic body styles were identical to Ford's with the Mercury's receiving several upmarket features, like twin taillights, directional signals, and an all-leather interior (Ford had genuine leather only on the seat cushions). Mercury shared Ford's new independent front suspension and open driveline, however, it used a larger, 255 cubic-inch version of the flathead V8.

The new Mercury was well received and model year sales expanded six-fold from 1948, aided in part by a longer model year. In total, over 300,000 examples were sold including over 8,000 station wagons.

Optional at this time were radio, heater, rear fender shields, whitewall tires, and foam rubber seat cushions. All 9CM models were equipped with a three-speed manual gearbox with the Touch-O-Matic being offered as optional equipment. Price ranged from $1,980 through $2,720.

This 1949 Mercury 8-Passenger 9CM Woody Wagon was offered for sale at the 2007 Blackhawk Collection Exhibit held at the Pebble Beach Concours. It carried a price tag of $275,000.....[continue reading]

The Mercury 9CM series of cars were introduced in April of 1948 and were the company's first new offerings of the post-War era. This also marked the first time since the launch of the brand in 1938, that the body panels were distinct from those of th....[continue reading]

The 1949 was designed in Ford's in-house studio by E.T. 'Bob' Gregorie and was originally intended as a Ford. It was to be the entry-level model, followed by the senior members being Mercury and Lincoln. Prior to plans being finalized, a competing Fo....[continue reading]