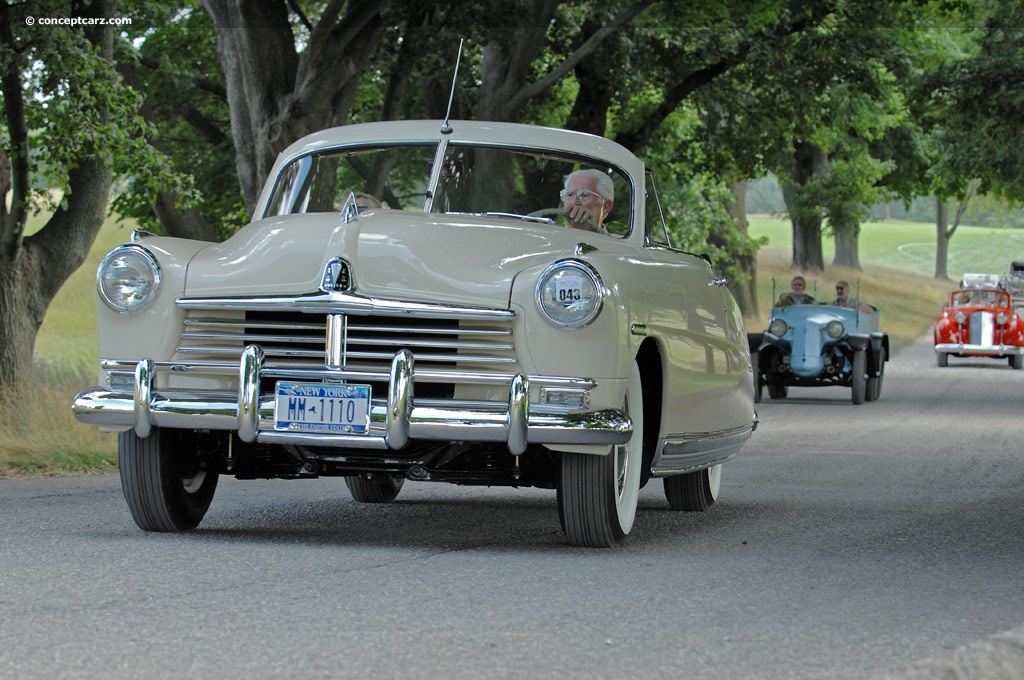 American automobile manufacturers scrambled to resume peacetime production following the close of World War II. Initially they were faced with supply shortages and labor disputes. Trying to meet the fierce pent-up demand for new cars, existing prewar automobile designs were placed back into production. Updates were often minimal as they focused their efforts on creating fresh new designs.

Hudson, an independent from Detroit, was one of the first automakers to introduce an all-new design, called its 'Step-Down' model. The design work had been led by Frank Spring and represented a revolutionary re-design from the traditional body-on-frame construction, which forced occupants to step-up and into their vehicles. The Hudson design consisted of a sturdy perimeter frame which encircled the passenger compartment and rear wheels. The bodies were of rigid semi-unitized construction. Along with allowing passengers easy entry and exit, it also gave the Hudson's enhanced road holding by virtue of the low center of gravity.

Hudson unveiled this new design in December of 1947, for the 1948 model year. They were built along two distinct lines - the Special with six- and eight-cylinder power, and the top-of-the-line Commodore Six and Eight. For 1949, changes to the Commodores were minimal, now called the 'Commodore Custom.'

Hudson had limited capital yet Hudson managed to widen its trim levels and introduced new models, all while retaining the basic 'Step-Down' Commodore in production through 1954, when the independent company ultimately merged with Nash to form American Motors.

Introduced in 1941, the Hudson Commodore was produced by the Hudson Motor Car Company until 1952. The Hudson Motor Company was established in Detroit and has a long and lucrative history. The Commodore model was the most lush and exquisitely luxurious Hudson model ever produced and the first generation introduced the 2-door coupe, 4-door sedan and the 2-door convertible. The largest Hudson model also,....
Continue Reading >>

In 1948, Hudson, one of the few independent automakers remaining in the late 1940's, introduced its post-war models featuring some of the hottest new ideas. A new Super Six engine purred under the hood, a hood was now attached to an all-new idea in a....[continue reading]

Hudson introduced their 'step-down' unibody models in 1948, allowing the placement of the passenger compartment down inside the perimeter of the frame that was an integral part of the body. Passengers stepped down into a floor that was surrounded by....[continue reading]

One of the first new postwar design, the Hudson commodore was introduced in 1947 and gained instant popularity by virtue of its road-hugging appearance and smooth power. Hudson wowed the public with its all-new 'step-down' 1948 models, which continue....[continue reading]

The Hudson Commodore series were introduced in 1948 and featured their 'step-down' design, which involved mounting the floor of the car to the underneath of the chassis, allowing for a very low center of gravity and plenty of interior space. Powering....[continue reading]

This Hudson Commodore Custom Six Convertible Brougham has been given a recent-, multiple award-winning restoration with cost no object. This revolutionary 'Step Down' model is powered by a NASCAR-bred 'Twin H-Power' engine, has a manual overdrive tra....[continue reading]