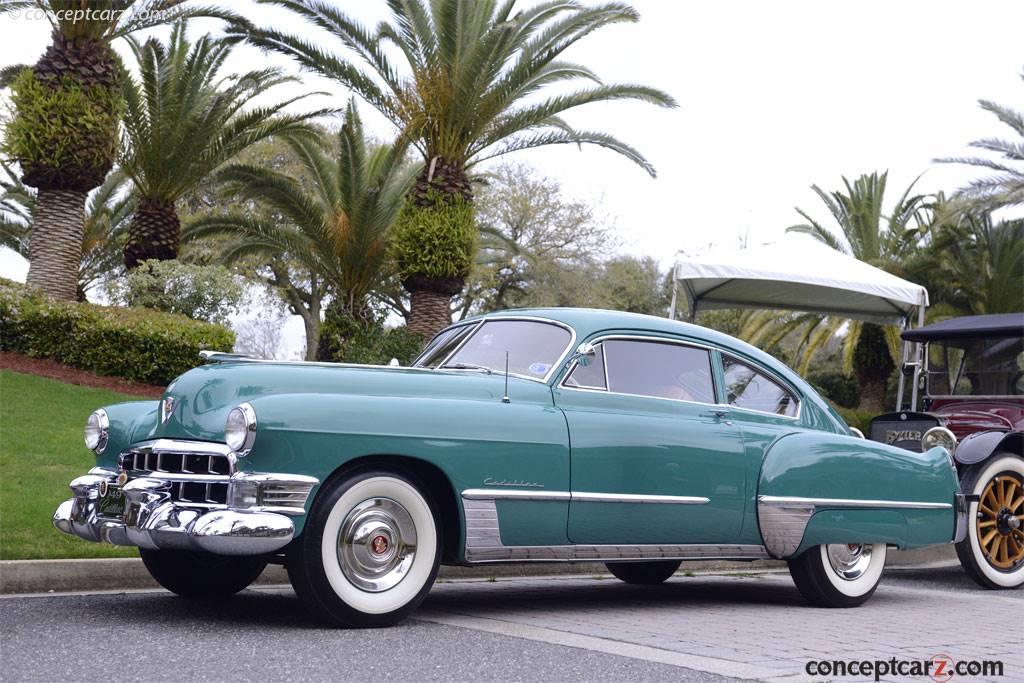 General Motors and its top-level Cadillac Motor Division outlasted the majority of its competitors by the late 1930s, many of whom were the victims of the Great Depression. During the early postwar era, GM offered the car-starved public mildly updated pre-war designs while perfecting its first new postwar models. The new Cadillac models for 1948 rested on a new chassis-frame design and body designs inspired by prewar studies of Lockheed's twin-boom, twin-engine P-38 fighter plane. Many clay models and prototypes were built, with this design work headed by Julio Andrade, assistant to GM design chief, Harley Earl. Despite the vast amount of resources and work invested into the early concepts, only the upward-flowing tailfins would grace the 1948 models. Many of the design features, however, were introduced over the following years, fist on Cadillacs, then filtered down to the rest of the GM product hierarchy.

After the new-for-1948 models, Cadillac styling for 1949 continued essentially unchanged. Detail refinements included the replacement of the prior 'rainbow' cluster-style dash design with a more conventional layout featuring a horizontal speedometer. The biggest change was the introduction of a new overhead valve V8 engine which offered an impressive 160 horsepower. With the then-high compression, the new V-8 delivered strong peak torque at just 1,800 engine revolutions. This would become the basis for many generations of Cadillac's to follow. It would also be used successfully by many legendary racers such as Allard and Cunningham. The V8 'valve-in-head' engine was light, smooth, economical to maintain, and offered much performance potential.

For 1949, Cadillac offered four models, including the Series 61 and 62 which were both sales successes and similar, identifiable by minor trim variations. The Series 62 was higher priced, had a distinctive Cadillac grille, and the front fender stone shields and rocker panel moldings were grooved. It was low, had a stretched hood line, and a wide stance. The interior was completely revamped and featured a new instrumentation panel, door moldings, trim and a stylish line of fabrics.

Motor Trend magazine named its very first 'Car of the Year' in November of 1949. Ford was quickly eliminated, leaving Cadillac and Buick as contenders. Since the Cadillac V-8 developed nearly 20 percent more horsepower and weighed less than the Buick engine, it was the obvious choice.
by Daniel Vaughan | Mar 2019

This car was purchased in 2005 by its previous owner and then entered in the Palos Verdes Concours d'Elegance the following September. It was purchased in early 2008 by its present owner and commissioned RM classic Cars for a total mechanical and saf....[continue reading]

In 1949, Cadillac introduced its new overhead valve V8 engine that was more compact and lighter than its predecessor. This basic engine would power Cadillac models through the late 1970s. ....[continue reading]

The overhead valve V8 engine displaces 331 cubic-inches and produces 160 horsepower. This Convertible Coupe has won a first place award at the Greenwich Concours. This award was bestowed upon this car thanks, in part, to its body-off restoration wh....[continue reading]

The Cadillac Series 62 was built on General Motors 'C' Body platform which had a wheelbase that measured 129-inchs and an overall length of 214 inches. 1948 was the first year for the P38 aircraft-inspired tailfins which first appeared on Cadillac a....[continue reading]

This Cadillac Series 62 features elegant details such a chrome wheel discs, kickplates, and spear trim that adorns the fenders. This Convertible Coupe came standard with power windows, a power top, an all-leather interior, and a color-matched painted....[continue reading]

The early history of this Cadillac Series 62 Convertible Coupe is not known. By the 1970s, it had come into the possession of a Hollywood, California, Cadillac enthusiast. In 1978 it was acquired by Southern California collector Myron Reichert and dr....[continue reading]

70 years have passed since the first tailfin graced the hind quarters of the then-new, 1948 Cadillac. Cadillacs of the era were instantly recognizable from any angle, especially from the rear. Stylist Harley Earl gained his inspiration from World War....[continue reading]