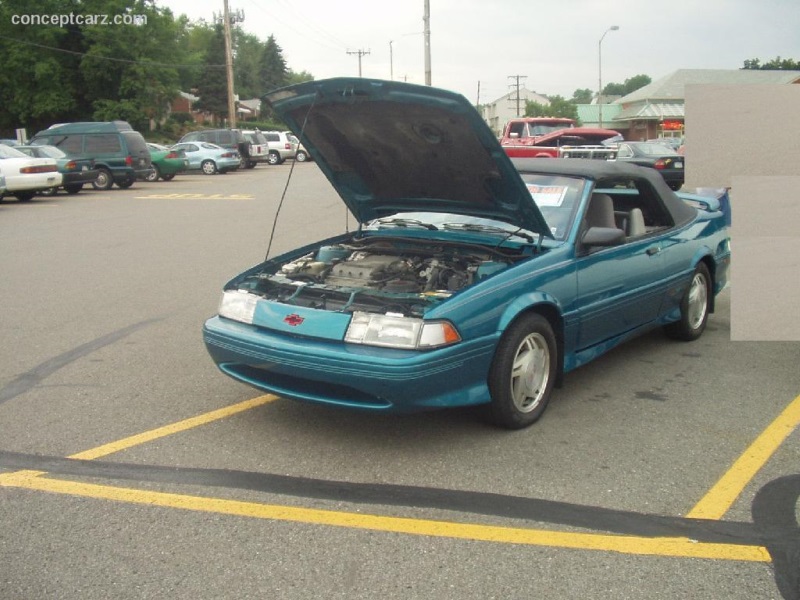 With a mission that has always held strong to the desire of being GM's value leader in the mainstream of the American car market, Chevrolet has continued to live up to this despite foreign brands that threaten to intrude upon this goal.One of the most popular vehicles in the U.S. and Canada during 1981 and 82, the Chevrolet Cavalier has successfully continued in production all the way through 2005. Sold for much less than the Honda Civic, the Cavalier was eventually retired as a comparably affordable compact vehicle. Chevy's version of the compact GM J platform, the Cavalier was originally designed with an aim towards quality imports like the Honda Accord. Hailed as the most successful of Chevrolet's long line of vehicles, the Cavalier was designed with the aim of combating the invasion of compact imported vehicles. The front wheel drive Cavalier was responsible for prosperously expanding Chevrolet's share of small vehicles.
In the U.K. the J-platform was utilized on the Vauxhall-badged version of the Opel Ascona C. All five U.S. divisions of GM, as well as in Germany, Australia and Britain offered the J-cars. Manufactured in Lordstown, Ohio, the Cavaliers have also been produced in Wisconsin, Michigan, Janesville, Lansing and Ramos Arizpe, Coahuila, Mexio.
The Monza, which was available as either a 3-door hatchback, 2-door coupe or a 3-door wagon, was replaced by the Cavalier. In charge of capturing the majority of domestic compact sales, the Cavalier even aided in upping lagging sales of the Nova replacement, the mid-size Citation. The Cavalier was featured in 2-door coupe, 4-door station wagon, 4-door sedan and eventually a 2-door convertible.Over the years, car enthusiasts have complained and criticized over the quality control of the Cavalier, along with the interior design and the aging platform. Unfortunately having a reputation for poor crash test rating on the third generation models, this still did not impact the strong sales of the Chevy Cavalier. Upon its release, the first generation Cavalier was discovered to be even more conventional in its time than the Vega. The 1982 Cavalier featured simple unibody with suspension that consisted of MacPherson struts in the front and a simple beam axle in the back on coil springs. A relatively small car in comparison with others of the era, the Cavalier had a 101.2 inch wheelbase and was a length of 173.5 inches. A simple 1.8-liter overhead-valve four with a pushrod-operated valvetrain and two barrel carburetor was the only engine that was offered at first, which was rated at only 88hp. The Cavaliers' 1.8 transverse-mounted 1.8 fed either a three-speed automatic or four speed manual transaxle. Upon its release, Motor Trend rated the Cavalier with a 0-to-60 time of 16.4 seconds, and the quarter-mile taking 20.7 seconds at a rate of 67.3 mph. Not considered up to par as a Sport vehicle, the Cavalier was still speedier than a sedan. In 1983, the issue of the limited power was addressed, and a new fuel-injected 2.0 liter version of the OHV four was introduced. Though it still only rated at 88 hp, the torque characteristics were much more satisfactory. During this year, a convertible Cavalier was made available, as well as the option of a five-speed manual transmission. A total of 627 Convertible units were sold in 1983.

Creating a new contemporary and traditional look, the 1984 Cavalier featured a new grill, four headlights and revised taillights. In this year, the Chevy Cavalier became the most popular new car in America.
Two years following the Chevy Cavalier's introduction, the Type-10, the sport coupe version, was introduced in 1984. Standard on all Cavaliers at the time, the Type -10 was available only with the 112 ci 4cyl engine.
Not many updates were made for the '85 model year Cavalier. Minor changes like new taillights, revised seats in the two-door coupe, and a new steering wheel rounded out the design of the vehicle, while a new V6 engine was made available for the first time.

Not much was done with the 2004 model other than the option of a ‘sport appearance package'. In October 2004 the final 2005 Cavalier model was rolled off the line at the Lordstown Assembly Plant on October 6. The 2005 Chevrolet Cobalt was the new replacement for the Cavalier in the U.S. while the Chevrolet Astra was the new replacement in Mexico.In the first year of production in the U.S. the Cavalier sold a total of 58,904 units. Sales nearly quadrupled in the following year. 1984 and 85 were the best-selling years for the Cavalier with number peaking at 462,611 in '84, and 383,752 in '85. Sales continued to remain high for the following years. A small number of concept vehicle have been introduced by GM based on the J platform. These were showcased at the '01 Specialty Equipment Market auto show and included the Cavalier 263 Super Sport, the Cavalier Z24R, the Cavalier 220 Sport Turbo Coupe, the Cavalier Maui 155, the Cavalier Technic Z24, the Cavalier 425 A/FX drag car and the Pontiac Sunfire HO 2.4. The goal of GM was to show the public that the Cavalier had a greater potential than was being utilized. The vehicles features supercharged engines, highly customized interiors, exotic exterior styling and very top-notch audio/video systems.Toyota released a version that they called the Toyota Cavalier coupe in 1996. This model was sold in Japan only for a short period of time. Toyota forged a company agreement with GM that allowed Toyota to badge the vehicle as a Cavalier with a few obvious differences. The Japanese version featured wider front fenders, a leather-wrapped shift knob and steering wheel, and the vehicle was a right hand drive. Other features included Japanese taillights, side turn signal repeater lights located on front fenders, power folding rear mirrors and carpeting on the interior of the trunk lid. Produced by GM in the U.S. the Toyota Cavalier produced a decent amount of sales during its five year production run.By Jessica Donaldson