Infiniti today revealed its all-new 2011 Infiniti QX full-size SÚV at a press conference at the 2010 New York International Auto Show. The new second-generation QX, which is designed to offer a true five-star travel experience, is scheduled to go on sale at Infiniti retailers nationwide this summer – with no increase in pricing over the 2010 QX. The 2011 QX is offered in two models – Infiniti QX56 2WD and Infiniti QX56 4WD.

The QX will be on display, along with the full lineup of inspired Infiniti vehicles – including the redesigned Infiniti G and all-new Infiniti M, which went on sale March 18th – at Jacob Javits Center from April 2nd through April 11th. 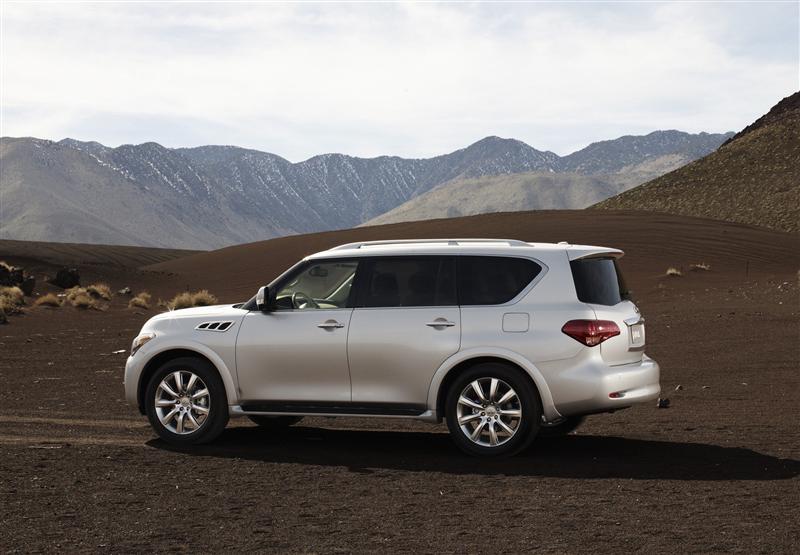 The 2011 Infiniti QX is conceived to attract and hold viewers' attention, conveying its underlying sense of power and strength. The design is dynamic, its size capable of transporting eight adults and their belongings with spacious elegance. Inside the distinctive QX body is an interior long on luxury and convenience, including standard Infiniti Hard Drive Navigation System, Around View™ Monitor, Bose® 2-channel, 13-speaker Premium Audio System, available perforated semi-aniline leather seating, and available DVD entertainment system with dual 7-inch color monitors which allows different sources to be played at the same time. The 2011 QX also offers ample 1st and 2nd row roominess and generous luggage space.

The 2011 QX combines a 400-horsepower 5.6-liter V8 engine with Infiniti's VVEL (Variable Valve Event & Lift) and Direct Injection Gasoline (DIG™) system with a refined 7-speed automatic transmission – providing a 25% increase in horsepower and more than a 10% increase in fuel economy versus the 2010 QX. The new QX's towing capacity is rated at 8,500 pounds for both 2WD and 4WD models.

For the first time ever on an Infiniti vehicle, a new Hydraulic Body Motion Control system is offered (available on both 2WD and 4WD models as part of the Deluxe Touring Package, which also includes 22-inch wheels and tires and a number of other features). The system helps reduce body lean while turning for a more comfortable ride.

Included among the new QX's standard premium entertainment and technology features are an 8-inch WVGA color touch-screen display, Infiniti Controller for use with the vehicle information systems and comfort and convenience features, and the Infiniti Hard Drive Navigation System with XM NavTraffic® with Real-Time Traffic Information, XM NavWeather™ with Real-Time Weather and 3-day forecast (XM® subscription required, sold separately) and Zagat Survey® Restaurant Guide. Bluetooth® Hands-free Phone System is standard, as is XM® Satellite Radio, ÚSB connection for use with iPod® Interface or other compatible devices, and Streaming Audio via Bluetooth®. 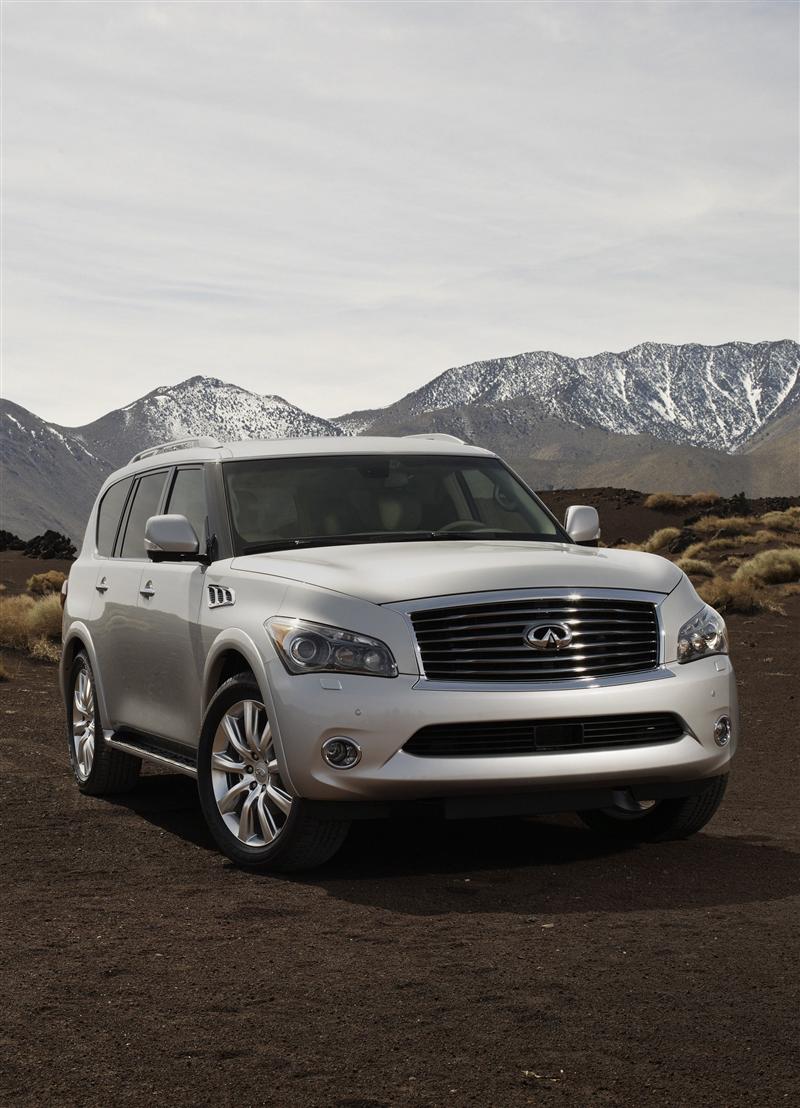 'We're especially pleased to be able to keep pricing at 2010 levels, despite the new generation QX's significant enhancements in luxury content, performance, fuel economy, and available advanced technology features,' said Poore. 'It's a smart investment in a vehicle unlike any other in the market today.'Source - Infiniti

In conjunction with the world debut of the all-new 2011 Infiniti QX Luxury Sport Útility Vehicle at a press conference at the New York International Auto Show today, Infiniti has announced pricing for the vehicle – which remains unchanged from the 2010 models. The 2011 QX is scheduled to go on sale at Infiniti retailers nationwide in early summer 2010.

Prices for the 2011 Infiniti QX start at a Manufacturer's Suggested Retail Price (MSRP)* of $56,700 ÚSD for the QX56 2WD and $59,800 ÚSD for the QX56 4WD. These prices are the same as the previous generation QX, despite added content and features including: 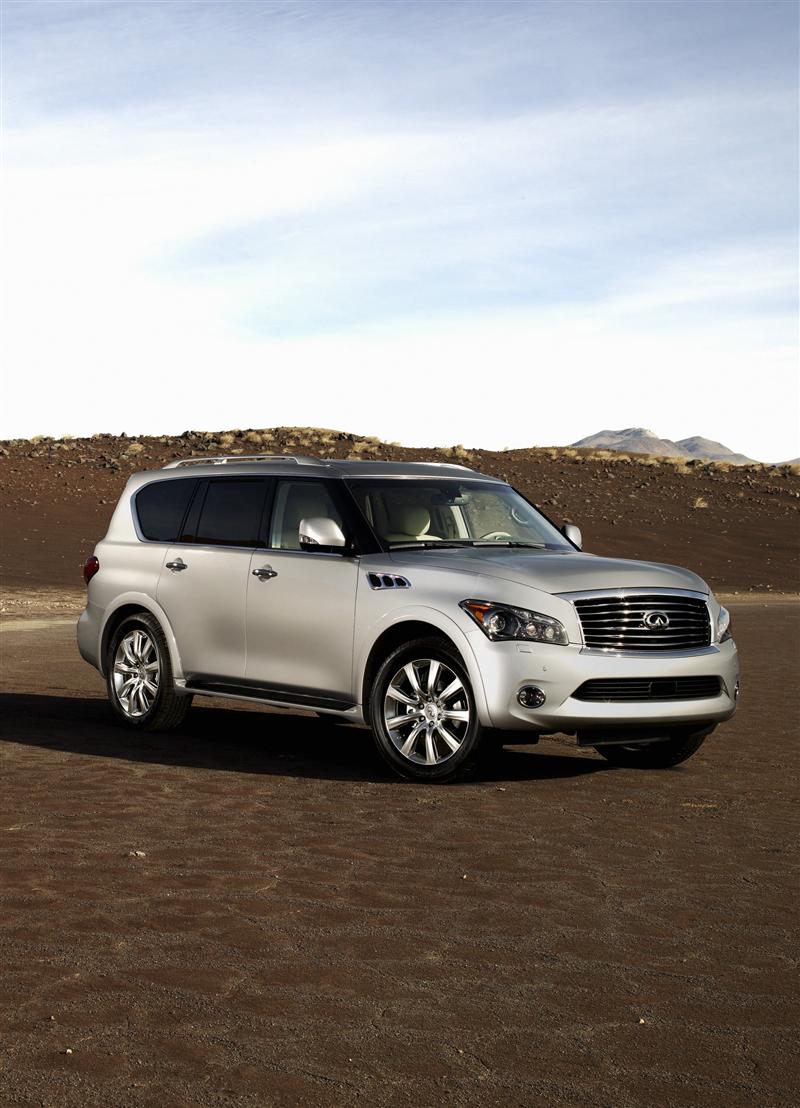 'This is a phenomenal vehicle at a phenomenal price point, especially given the enhanced styling inside and out and the impressive suite of new and improved standard features,' said Ben Poore, vice president, Infiniti Business Únit. 'The new QX is designed to offer a true five-star travel experience, while providing the benefits of available eight-passenger seating capacity, versatile cargo space and 8,500-pound towing capacity. It sets a new standard in full-size luxury SÚVs.'Source - Infiniti