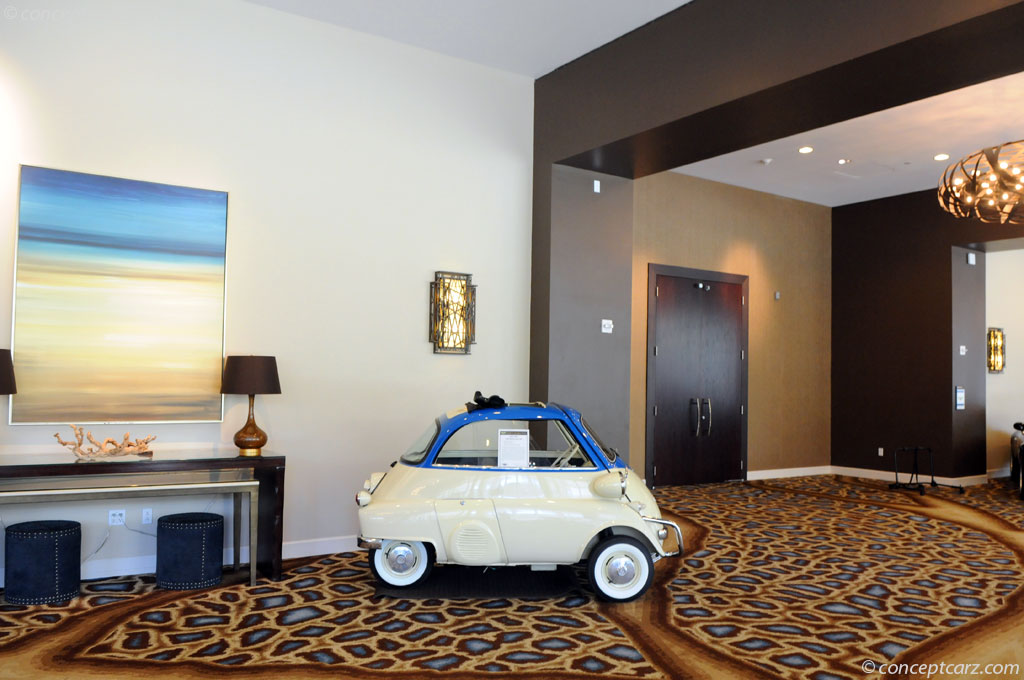 At a time when cheap, short-distance transportation was preferred by consumers, BMW introduced the Isetta in November of 1953 at Turin. One of the most successful microcars that were produced in the post-WWII years, the egg-shaped Isetta's design originated in Italy. The Isetta received the nickname 'bubble car' because of its bubble-like windows and its egg shape. Other nicknames for the Isetta were 'das rollende Ei'; the rolling egg in Germany, along with the 'Sargwagen'; coffin car, 'yogurt pot' in France, 'huevito'; little egg in Chili and in Brazil, the 'bola de futebol de fenemê'; soccer ball of FNM.

The Iso Isetta originated from the Italian firm of Iso SpA, a company that originally began building compact three-wheeled trucks, motor scooters, and refrigerators. In the early 1950s Renzo Rivolta, Iso's owner, chose to build small vehicles for mass consumption. Pierluigi Raggi and Ermenegildo Preti, the engineers behind the design, built the Isetta with a scooter engine. Isetta means little ISO in Italian. The designers came up with the design by taking two scooters, placing them close to each other and adding a refrigerator before shaping the result like 'a teardrop in the wind'.

Considered by some to be the best microcar of all time, the Isetta caused quite a stir when it was unveiled. More unique than anything out there at the time, the 'bubble car' was only 7.5 feet long and 4.5 feet wide. The entire front end of the vehicle hinged outwards to allow entry, along with an exit for passenger and driver through the canvas sunroof in the event of a crash. Making access to the single bench seat simpler, both the steering wheel and instrument panel swung out with the single door. There was enough room inside the vehicle for two passengers to sit comfortably, and behind the seat was a spare wheel hidden underneath a large parcel shelf. Ventilation was available by opening up the fabric sunroof, and a heater was optional.

The Isetta came with a 236 cc 9.5 hp two-cylinder two-stroke motorcycle engine. Dynastart was a combination of generator-starter, and a manual gearbox provided four forward speeds and reverse. The rear wheels were 10-inches, and a chain drive connected the gearbox to a solid rear axle.

The original prototype came with one wheel at the rear, but unfortunately, this made the vehicle very susceptible to rolling over, so two rear wheels were places at the rear 19 inches away from each other. Since the track was so narrow, no differential was needed. The front axle was an updated variation of a Dubonnet independent front suspension.

The Iso Isetta achieved a top speed of 45 m ph, and could reach 30 mph in just over 30 seconds. The Isetta featured a small fuel tank that only held 3.5 gallons, and could get somewhere between 50-70 miles per gallon of gas.

Iso introduced two models, the Autocarro; a commercial version with full-width rear axle and the Turismo which had a narrow 50 cm rear track. The Autocarro came in a variety of body styles, an enclosed truck, a tilt-bed, a fire engine, and a flatbed pickup. In Italy, the Autocarro was immensely popular as that type of vehicle was utilized often.

Achieving an average speed of 43 mph, several Isettas were entered in the Mille Miglia in 1954. The Isetta took the top three spots in the economy classification, a distance more than 1,000 miles that the drivers achieved in more than 70 mph. Even though at first the Isetta was incredibly popular, it began to drop in popularity due to renewed competition from FIAT with its 500C model.

At this time, Rivolta wanted to spend his time and energy on his new Iso Rovolta sports vehicle, and also concentrate on doing license deals. During mid 1954, BMW started talking with Rivolta about not just a license, but in fact the complete Isetta body tooling. Licensing the Isetta to BMW wasn't the last thing Rivolta did, he also negotiated similar deals with companies in Brazil and France.

In 1955 the production of Italian built cars ending after the construction of about 1,000 units. It is estimated that around 4,000 Autocarros were built, while Iso continued to build the Isetta in Spain until 1958.

The first car to be produced in Brazil, the Romi-Isetta was introduced on September 5th, 1956. A total of 3,000 units were introduced from the beginning of production until 1961. Iso licensed the Isetta to Romi, a machine-tool manufacturer in 1955. Romi is located in the city of Santa Bárbara d'Oeste, in the State of São Paulo. The Iso design and engines remained ntil 1958 before they were replaced with the BMW 300 cc engines.

The Isetta's powerplant was redesigned by BMW. The powerplant was rebuilt around a BMW one-cylinder, four-stroke, 247 cc motorcycle engine that produced 13 hp. Most of the original elements of the Italian design stayed the same while BMW re-engineered much of the vehicle so that none of the parts between and Iso Isetta and a BMW Isetta Moto Coupe are interchangeable. In April of 1955, the first BMW Isetta was unveiled. In the following eight months an around 10,000 'bubble cars' were produced.

BMW added the Isetta 250 to the lineup. Keeping the same 'bubble windows' as the original Isetta, this version was redesigned to carry a modified version of the 250 cc 4-stroke engine from the BMW R25/3 motorcycle and the front suspension was also updated. The 250 was two-tone colored and featured headlamps fixed separately to the sides of the bodywork.

The cylinder head was made up of aluminum while the crankcase and cylinder were constructed of cast iron. At 5800 rpm, the single-cylinder generated 12 hp. Compared with the motorcycle engine the head was rotated by 180 degrees. The twin-bearing crankshaft was also much larger and came with reinforced bearings due to the heavy Dynastart unit that combined the self-starter and the dynamo. BMW also enlarged the sump for installation in the vehicle and cooled the engine by a radial fan and shrouded ducting. The Isetta 250 had a top speed of 53 mph and in Germany could be driven with just a motorcycle license.

The Isetta Moto Coupe DeLuxe; or Isetta 300 was introduced in October of 1956. Considered to be the 'sliding-window' Isetta, as longer, sliding side windows replaced the famous bubble windows. The 300 featured an enlarged single cylinder to a 72 mm bore and 73 mm stroke which now achieved a displacement of exactly 298 cc. The compression ratio was already raised from 6.8 to 7.0:1. The engine now got 13 hp at 5200 rpm, while the torque jumped to 18.4 N•m at 4600 rpm. The top speed remained at 53 mph on the Isetta 300.

Produced with the intent to be an enlarged Isetta three-wheeler with even more power, along with a conventional four-wheel configuration, the BMW Isetta 600 was the largest of the BMW bubble vehicles. Though the front end of the 600 looked just like the regular Isetta, the wheelbase was stretched to allow room for four passengers comfortably. All-new semi-trailing arm independent suspension was introduced, while a conventional rear axle was also added. This was the same suspension that would be found on every new model for the next 40 years.

Featuring a much more powerful engine, the Isetta 600 came with a 582 cc twin engine from the R67 motorcycle and could achieve a top speed of 64 mph. Only 34,000 Isetta 600's were produced in the two years of its lifespan, mainly because of the competition from the entry-level VW Beetle.

An all-new Isetta is scheduled to be released in 2010 and will be built on the same platform as the Fiat Topolino. The rear-engined, rear-wheel drive vehicle is expected to achieve 100 mph.By Jessica Donaldson

The small, BMW Isetta had seating for two and an ingenious entry/exit system. As the front of the car was opened, the hinged steering column also sung open, allowing for entry and exit. Power was from a 298cc single cylinder air cooled overhead valve....[continue reading]