Kia Motors latest study, the diesel-powered ‘Cerato Green' is unveiled at the Geneva International Motor Show, alongside the all-new Kia Cerato five-door hatchback range which is making its world premiere in Switzerland. Cerato is the first Kia passenger car to be diesel-powered and European customers can choose between 1.5-litre and 2.0-litre engines featuring advanced common-rail technology which delivers strong performance, excellent fuel economy and clean emissions.

The dramatic-looking Cerato Green is designed to highlight the introduction of Kia's new generation of diesel engines - the 1.5-litre will produce a best-in-class 102 ps. The 2.0 diesel presented in the show car will be part of the Kia range in 2005. Based on a top-of-the-range five-door Cerato EX 2-litre diesel model, the Cerato Green show car is lower (by 25 mm) , wider
(by 30 mm) and more purposeful with a distinctively different face. The Somerset Green pearlescent paintwork changes color as the car is viewed from different angles, the alloy wheels and the door handles are coated with special aluminized paint, the headlamp surrounds and air intake grilles have a unique treatment and the interior is hand-finished in premium quality leather.

'As well as showcasing our new diesel-powered family car, the Cerato Green demonstrates how a touch of sportiness and elegance can be brought to the C-segment,' comments Michael Fink, Chief Designer Kia Motors Europe. 'The all leather interior is trimmed to limousine standards and the fit, finish and overall quality of the whole car is indicative of the high quality we are aiming to achieve on all our products. Designer Dominique Raye took great care in selecting materials for interior of Cerato Green with the most natural look and feel. 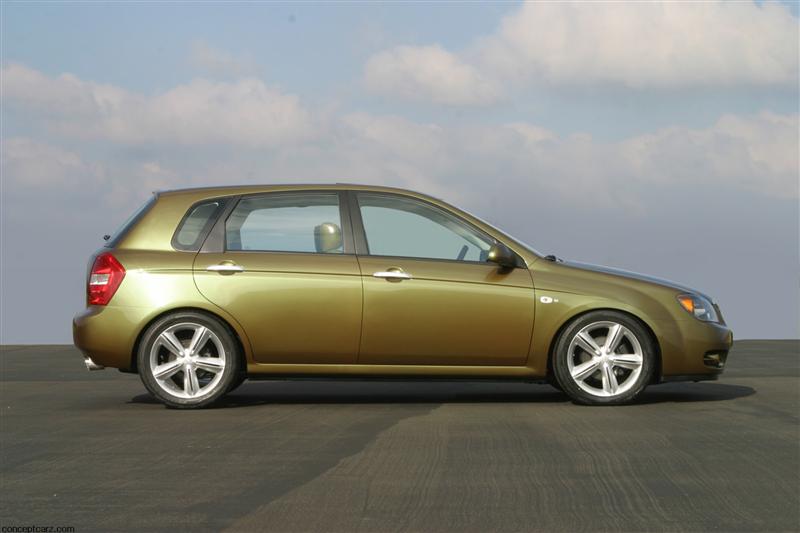 The Cerato Green is not just a cosmetic exercise. The lowered suspension, wider track and bracing strut between the front suspension turrets deliver tauter handling. The larger 17-inch diameter five-spoke alloy wheels, shod with 205/50 ZR17 Bridgestone tyres, give greatly enhanced grip. The high-power 2-litre, 16-valve, CRDi engine is modified to produce 135 ps
while retaining good fuel economy and low emissions - just 159 g/km. This engine will be offered in some Kia models from 2005.

The concept car on show at Geneva was designed at Kia's Research & Development Centre in Russelsheim, Germany and built by the famous French coachbuilder Groupe Henri Heuliez SA in Cerizay.

'We wanted to create a car that will have a very positive impact on show visitors at Geneva. A car that will give them a strong and lasting memory of the new Kia Cerato to take away with them from the show. A memory that will stay fresh until the Cerato range appears in dealer showrooms later this
Spring', concludes Fink.

The new diesel-powered Cerato Green concept car revealed at the Geneva Show is an example of Kia's future commitment to taking corporate environmental responsibility and to adopting less-polluting manufacturing processes. Led by Chairman Mong-Koo Chung, senior Kia managers have
pledged the corporation to a renewed programme of environmental management in the years ahead. Designated ‘ECO GT5 2010' the programme commits Kia to becoming an environmentally friendly Global Top 5 automobile maker by 2010. The corporation will take proactive measures to reinforce best environmental practices in the manufacturing processes at its domestic and foreign plants and to act as a responsible global citizen.

'Friendliness to the environment will be adopted as one of the core management strategies for Kia and Hyundai,' declared Chairman Chung. 'By 2010, we will be allocating a total of Euro 1.1 billion into environment-related investments.'

As part of the ECO GT5 2010 activities, Kia has set up an environmental research centre at its Namyang R&D facility, to spearhead the company's drive to speed up development of less polluting hybrid and fuel-cell vehicles.
Other activities include greater re-cycling of used-car parts and adopting minimum pollution policies throughout the design, manufacturing and marketing process for all future Kia vehicles.Source - Kia 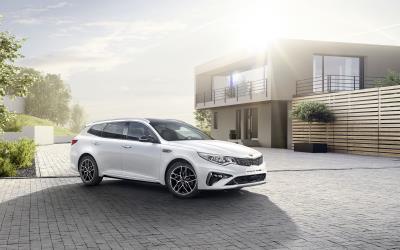 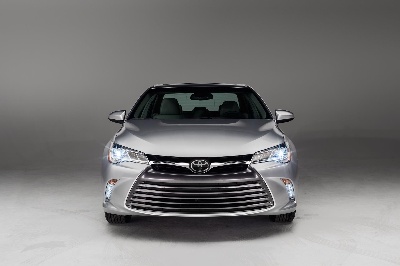