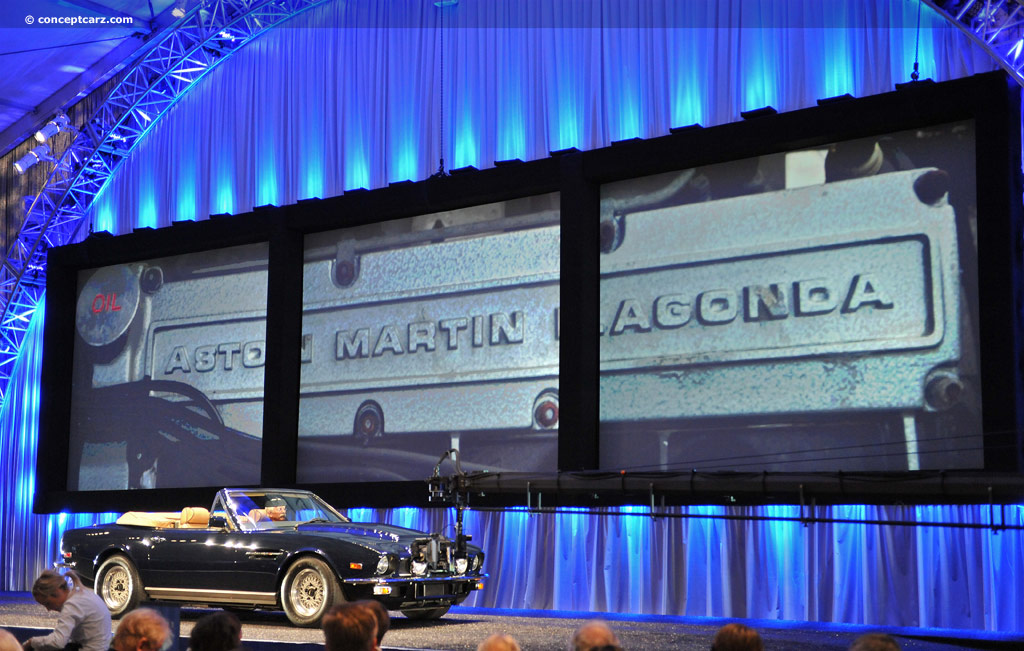 The Aston Martin V8 was manufactured from 1969 to 1989 with each example being handbuilt, with each car requiring 1,200 man hours to complete. It was built to replace the V6-powered DBS, however the engine was not ready by the time production began. So in 1967, Aston Martin the DBS powered by the straight-six Vantage engine from the DB6. The Tadek Marek's V8 engine was ready two years later, and the company released the DBS V8. After the demise of the straight-six Vantage in 1973, the DBS V8 was simply called the Aston Martin V8. It would remain in production until 1989 when it was replaced by the Virage.

The Aston Martin DBS V8 had a similar body design as the six-cylinder DBS, with four headlights and a squared-off grille. The V8 models had a larger front air dam, redesigned tail lights, and were devoid of wire wheels.

The 5.3-liter V8 engine added roughly 250 pounds, although the manufacturer stated it weighed only 30 lbs more than the outgoing six-cylinder unit. Other items that added additional weight included the ventilated disc brakes, fatter tires, a new ZF gearbox, air conditioning, and additional bodywork. Although the factory did not officially release the horsepower, estimates have it at around 315 bhp, which gave the DBS V8 a zero-to-sixty mph sprint in 5.9 seconds and a top speed of nearly 160 horsepower.

In October of 1978, Aston Martin introduced the Series 4 'Oscar India' at the Birmingham International Motor Show. Most were fitted with a Chrysler 'TorqueFlite' three-speed automatic transmission. The interiors featured wood trim which was the first time it was used in production Aston Martins since the DB2/4 of 1950s. The hood scoop was replaced with a closed 'power bulge', and a spoiler was integrated into the tail. Between 1978 and 1985, a total of 352 examples of the 'Oscar India' were built.

In June of 1978, Aston Martin introduced the convertible 'Volante.'

At the 1986 New York International Auto Show, a fuel-injection system was fitted to the engine. The Weber/Marelli system had a compact design which meant there was no longer a need for the bonnet bulge. A total of 405 examples of the fuel-injected 'Five Series' cars were built before production came to a close in 1989.

The world previewed the Newport Pagnell's entry into the specialty supercar market at the 1986 Geneva Motor Show. Dubbed the Aston Martin Vantage Zagato, they wore lightweight aluminum coachwork that included a hood bulge for the re-tuned Vantage V580 engine, offering 430 horsepower. A total of 52 coupes were built, though at least one of those was a re-numbered show car (the show car was originally chassis number 11, which was changed to 13 post-show). Performance was enhanced even further by shortening the wheelbase and removing the rear seats, thus creating Aston martin's first production two-seater since the DB4GT. The lightweight design and 5.3-liter V8 helped give the Vantage Zagato a top speed of 186 mph.
by Daniel Vaughan | Nov 2019

The Aston Martin V8 was produced from 1969 through 1990 and was, of course, powered by an eight-cylinder engine. For many years eager customers had been pleading with Aston Martin to produce an eight-cylinder car. Expected to be completed by 1967, the engine took a few more years of development before being ready. In the mean-time, Aston Martin introduced the DBS which borrowed its Vantage six-cylinder....
Continue Reading >>

Production difficulties meant the new V8 engine was not ready in time to be placed in the DBS when the car first appeared. Instead, the DBS was fitted with the DB6's 4.0-liter six. The DBS was larger and more luxuriously appointed the DB6, but meant ....[continue reading]

This late-Series One V8 Volante is finished in Mercedes-Benz Midnight Blue and upholstered with natural colored hides and dark blue carpets. The car was completed on September 5th of 1986 and dispatched for the United States a week later and was subs....[continue reading]

This Aston Martin V8 Vantage Zagato was manufactured in early July of 1986 and left the factory finished in Gladiator Red paint over a tan interior and delivered to Brian Taylor. Rowan Atkinson acquired it in 1998, who immediately commissioned Aston ....[continue reading]

The 20th edition of the Bonhams Aston Martin Sale, the leading European auction dedicated to the Aston Martin and Lagonda marques, will be staged for the first time at the renowned Wormsley Estate in the Chiltern Hills of Buckinghamshire, on Sunday 19th...
© 1998-2020. All rights reserved. The material may not be published, broadcast, rewritten, or redistributed.