Sold for $48,300 at 2012 Bonhams - Quail Lodge Sale.
The Rolls-Royce Twenty was the company's answer to those seeking a model that could meet requests for a smaller, less expensive car. They were arguably the company's first car to leave the legacy of the Edwardian age behind. Power came from a 3127cc overhead valve inline six-cylinder engine and the gear selector and brake moved inside the body where it was both more convenience and didn't require reaching outside into the rain and wind. The overhead valve engine was a first for Rolls-Royce and mated to a three-speed transmission with central gear-change. The transmission was not well liked and when four-wheel, servo-assisted brakes were introduced in 1925, a four-speed gearbox with right-hand, gated change replaced served as its replacement. With a 129-inch wheelbase, the Model Twenty was a foot shorter than the contemporary Silver Ghost. The single ignition with coil and distributor increased reliability of the components and saved the company money.At introduction, the chassis price was £1,100 which was far less than the £1,850 cost of a Silver Ghost. Built to the same high standards as the big 40/50 hp cars, they had a similar parallel girder frame with tubular cross-members and full-floating rear axle (albeit a bit smaller and lighter). The suspension was different for Rolls-Royce and employed semi-elliptic leaf springs in both the front and rear.
This Rolls-Royce 20HP Cabriolet with coachwork by Barker & Co. was ordered by HRH The Prince of Wales in 1923. The Prince of Wales is believed to have owned 11 examples of the marque in his lifetime, and that's not counting the Rolls-Royces others have claimed Edward owned over the years. This example was given dual-windscreen coachwork by Barker. The car was regularly serviced until 1933; the subsequent history is unclear but it is believed that the car remained in the United Kingdom. As some point in the late 1960s or early 1970s, the car joined the exodus of pre-war Rolls-Royces crossing the Atlantic and is believed to have been part of the MGM movie fleet before passing into the long-term ownership of kept it stored away in Brentwood, California for three decades.
This car has been with the current California owners since March of 2000. It is currently in unrestored condition and substantially complete. It wears its original Barker coachwork and has features like a speedo and a clock mounted in the rear compartment, Lucas lighting and the coachbuilders plates. In 2012, the car was offered for sale at the Quail Lodge Sale in Carmel, CA presented by Bonhams Auction. As bidding came to a close, the car had been sold for the sum of $48,300, including buyer's premium.
By Daniel Vaughan | Oct 2012
Aimed at the professional segment of the middle-class owner-drivers such as doctors, dentists, solicitors and moderately successful businessmen, the Twenty cost about 40% less than a Ghost, yet still met the same exacting standards of design, materials and workmanship.

In the year of its launch in 1922, it had a chassis price of 1,100 (pounds) with a standard open tourer body the price was around 1,600 pounds. The Twenty was conceived and executed with typical attention to detail, object, being as stated by Royce: 'to spend as much money in the construction as can be done wisely, but not unnecessarily'.

The Twenty had been built to carry open and enclosed bodies with up to six seats, but with a light body it was capable of what Royce called a high road speed. In 1922 40 mph was considered a fast cruising speed, yet the Twenty was capable of just over 60 mph. 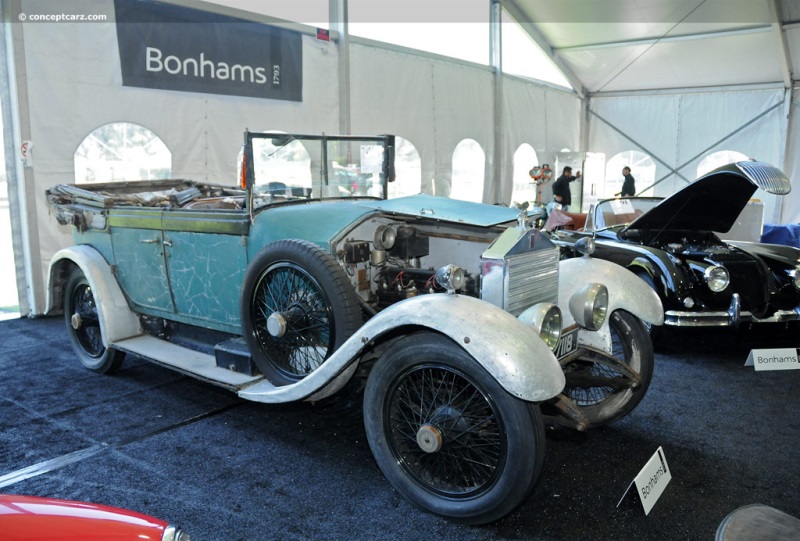 Ongoing development of the car, a process the company used on most models, eventually upped the top speed to over 70 mph.

Henry Royce's biographer, Sir Max Pemberton, raved about his Twenty. 'The late Lord Northcliffe once said to me that as an instrument of advertising British efficiency in industry, the Rolls-Royce car was unique. When I reflect upon the performance of the 'Twenty' I have driven now for six years, I am wholly in accord with this opinion. It is surely one of the world's two great cars. The other is the 'Phantom'.Source - Rolls-Royce Motor Cars
Around the same time that public interest was leaning towards the post-WW1 cars, Royce began development on his design for a brand new chassis, a smaller vehicle, and the first project since 1906 that would reach production. In the U.S. this little car was dubbed the 'Baby Rolls'. In 1922 it was debuted as the '20 HP car' or the 'Twenty'. This engine was fully an overhead-valve type and until the original F-head 20 HP of 1905 it was a six-cylinder engine instead of a four. Originally it came with a three-speed gearbox. The capacity was 191 cubic inches and bore and stroke are 3 by 4 ½ inches.The 1922 20 HP engine was slightly smaller than the late straight six cylinder Chevy engines before the high-powered V8s became popular. The six cylinders were cast as a single block and depicted the first engine with a detachable head carrying vertical overhead valves operated by push-rods and with the gearbox integral with the clutch housing and engine. Earlier on in the original models the gearshift lever was located in the middle in this right-hand drive chassis but eventually a four-speed gearbox would replace the three-speed unit. The gear change lever would be relocated to the right-hand side along with the hand-brake, much like the contemporary 40/50 made in the UK, and the earlier ones produced at Springfield. Instead of the torque-tube housing that was found on the Ghost chassis the 20 HP featured an open propeller shaft. The maximum power output was around 50 BHP and the compression ratio is 4.6 to 1. Never built at Springfield, the Twenty did quite well in Europe.
Built on a shorter wheelbase than the Silver Ghost, the 20 HP was easily recognized by its horizontally arranged radiator shutters. The smaller 3-liter, 6-cylinder engine 20 HP was an excellent addition to the Rolls-Royce range. Between 1922 and 1929 a total of 2,885 Twenty's were produced. These models were geared towards the middle-class owners like doctors, dentists and other successful businessmen. It cost around 40% more than a Ghost though it continued to meet the same rigorous standards of design, components and craftsmanship.
Royce stated its intent was 'to spend as much money in the construction as can be done wisely, but not unnecessarily' on the design of the Twenty. As such it was created with the usual exacting attention to detail as all Rolls-Royce vehicles. The standard open tourer body Twenty was priced around 1,600 pounds while a chassis ran for around 1,100 pounds.Featuring a high road speed according to Royce, the Twenty was built with a light body but could carry open and enclosed bodies up to six seats. The '20 HP' was able to achieve over 60 mph, which was impressive considering 40 mph was considered a fast cruising speed in 1922.By Jessica Donaldson