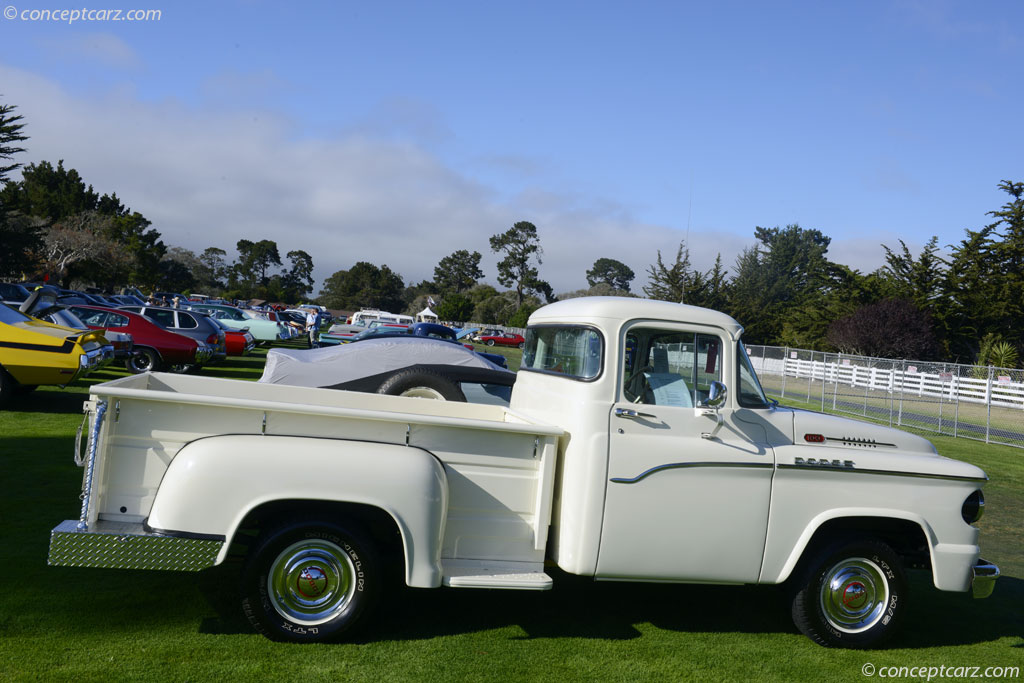 High bid of $25,000 at 2014 Mecum - Monterey. (did not sell)
The Dodge D Series pickup trucks were produced from the mid-1950s to 1980. The trucks produced by Dodge after 1980 were renamed the Ram and retained the same basic design until 1994 when a completely redesigned pickup was introduced. The D100 name was first used by Dodge in 1957, when the company adopted a new vehicle identification system. The letter represented the Series while the number ranked the vehicles according to truck sizes. The 'D' meant it had a conventional cab.For 1959, Dodge introduced a new bodystyle to its lineup called the Sweptline. The D100 came it two sizes, one having a 108-inch wheelbase while the other had a longer 116-inch wheelbase platform. The fender-sided pickup was now called Utiline. The standard engine was a six-cylinder, 230 cubic-inch unit. This was the first year for the optional 318 CID, 205 horsepower V8.For 1959, Dodge gave their D100 line a new hydraulically operated clutch, and suspended brake and clutch pedals. Inside, the glove box was moved farther right and the gauges were now directly in front of the driver. 13 exterior colors were available including four new colors: Buckskin Tan, Vista Green, Heron Gray, and Sand Dune White.
This 1959 Dodge D100 Utiline Pickup was special ordered by the current owner on January 12th of 1959. Since new, it has been given a frame-off restoration, bringing it back to 'as delivered' condition. It has many factory optional items including the 318 cubic-inch 205 horsepower V8 engine, a 4-speed transmission, full traction differential, 1 quart oil filter and oil bath air cleaner, heavy duty instrument cluster, factory Sun tachometer, and a 90-inch long bed on a 166-inch wheelbase. The bed is White oak with chrome stripes.
By Daniel Vaughan | Dec 2014
Concepts by Dodge